Molecular Biology and Evolution. Tracking the evolutionary history of a cancer-related gene

Alfonso Valencia’s group, alongside French researchers, reveals how a genetic duplication that occurred millions of years ago encouraged the evolution of the ASF1b gene, involved in cancer development

The duplication of the original gene gave way to a separation and optimisation of its functions, which might have implied an adaptive advantage for the cells

How and when evolution generates diversity or gives form to proteins, living beings’ functional building blocks, are essential questions that still surround the theory of evolution. In humans, the majority of genes have emerged via genetic duplication, a strategy in which a gene generates two identical copies that can evolve to generate different proteins.

A study published today by scientists from the Spanish National Cancer Research Centre (CNIO) describes how a genetic duplication that took place in the vertebrate ancestor some 500 million years ago encouraged the evolution of the ASF1b gene; a gene essential for proper cell division and related to some types of cancer such as breast cancer. The results of the study are published in Molecular Biology and Evolution, one of the most prestigious journals in the field of molecular biology and evolution.

The conclusions of the study are the result of collaboration between the team led by Alfonso Valencia, vice?director of Basic Research and director of CNIO’s Structural Biology and Biocomputing programme, and the team led by Genevieve Almouzni, a member of CNIO’s Scientific Advisory Committee, at the Institut Curie in Paris, France.

Valencia says: “When proteins have such a close similarity as the one that exists between the two human copies of the ASF1 gene—ASF1a and ASF1b—it is commonly assumed that they have similar functions in cells; in this case related to fundamental processes such as DNA remodelling and repair, cell division, cell proliferation and genetic transcription or activation”.

THE GENOMIC ENVIRONMENT, KEY TO SUCCESS IN SEPARATING FUNCTIONS

Almouzni’s team discovered several years ago that, despite the similarity in structure, the two copies of ASF1 were not redundant, but rather had divided up their ancestral functions. How and why, though, did this specialisation happen, and what biological advantages were conferred on the cells?

The authors of the study have used sophisticated ancestral state reconstruction methods in order to track the evolutionary history of ASF1 from its duplication. To this end, they have studied the genome of up to 40 species, some of them as diverse as sea urchins, lampreys, fish, frogs or a wide spectrum of mammals and birds.

Federico Abascal, first author of the study, explains: “Our results suggest that ASF1b is the original copy that was duplicated millions of years ago. Following the duplication, the other copy moved twice within the genome, settling in very different surroundings to the original”. Daniel Rico, one of the study’s authors, adds: “It is precisely this localisation of the two genetic duplicates in such different genomic environments that possibly opened up the door for ASF1b and ASF1a to follow different paths”.

According to the researchers, the new genomic context and positive selection are responsible for the subtle differences between the two proteins, which are those that allow them to develop different functions.

“This function separation process put an end to the adaptive conflict in the ancestral gene, which should have simultaneously carried out very different competitive functions that were indispensable for the cells”, says Valencia.

The researchers point out that studying the molecular history of genes is fundamental to understanding how they adapt to the functions they develop. In the case of proteins as important as ASF1, this knowledge is crucial for establishing the process of its deregulation in cancer. 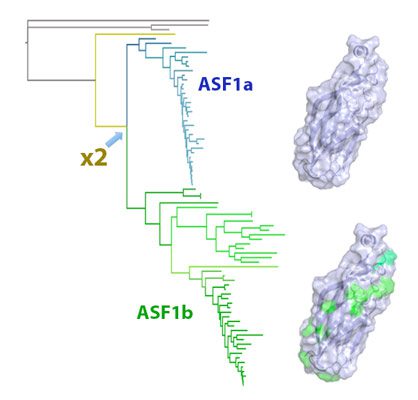 Phylogenetic tree showing the moment at which the duplication of the original gene in the vertebrate ancestor (x2) took place, as well as the evolution of the resulting duplicate genes: ASF1a (above) and the gene that is related to cancer, ASF1b (below). The areas marked in green indicate positions that have mutated in each of the lineages. CNIO