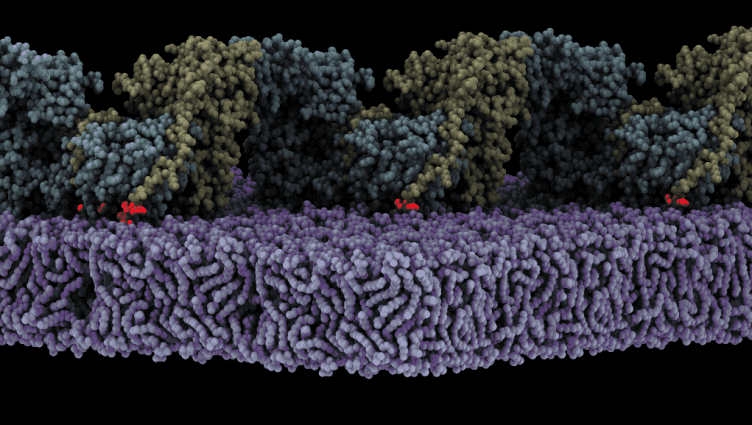 A research team led by Daniel Lietha has just published in The EMBO Journal the mechanistic details of the activation of the Focal Adhesion Kinase (FAK) on lipid membranes. Lietha started this research during his work at the Spanish National Cancer Research Centre (CNIO) and has culminated it in his current institution, the Centro de Investigaciones Biológicas Margarita Salas (CIB-CSIC).

FAK is a key protein ensuring controlled cell adhesion, proliferation, migration and survival which in cancer is often responsible for aberrant cell invasion leading to metastatic cancers. In the cytosol, FAK adopts an autoinhibited state but is activated upon recruitment into focal adhesions, yet how this occurs or what induces structural changes was unknown.

Lietha’s group have demonstrated that FAK is activated when it is localised to the cell membrane where it interacts with specific phosphoinositide lipids. Now, the high-resolution structure of an oligomeric form of FAK bound to a lipid membrane has been obtained using Cryo-Electron Microscopy. The analysis of the structure shows that initial binding of FAK to the membrane causes steric clashes that release the kinase domain from autoinhibition, allowing it to undergo a large conformational change and interact itself with the membrane in an orientation that places the active site towards the membrane.

To validate the computational model, different mutants of FAK have been generated carrying mutations at the observed interfaces. Extensive biochemical experiments have been carried out to evaluate how the different mutations affect lipid binding, FAK autophosphorylation and activation. Moreover, how the mutations affect FAK function in cancer cells was also studied revealing that the uncovered mechanism is key for cancer cell invasion and proliferation.