The CNIO team, led by Alfonso Valencia, has revised the latest methodologies for studying the evolution and interaction of proteins, as well as future applications for selective drug development

Spanish National Cancer Research Centre (CNIO) researchers Alfonso Valencia, Director of the Structural Biology and Biocomputing Programme and David de Juan, jointly with Florencio Pazos, from the Spanish National Centre for Biotechnology (CNB-CSIC), will today publish a review on the latest computational methods that, based on evolutionary principles, are revolutionising the field of analysis and prediction of protein structure, function and protein-protein interactions, as well as the short- and long-term expectations for the field.

“The computational and mathematical analysis tools that study how proteins evolve in a coordinated fashion —a process known as molecularcoevolution— have undergone important changes over the past few years”, explains Valencia.

This revolution in the study of microscale evolution is allowing researchers to predict interactions between proteins and to understand the structural changes that take place in these molecules. It also represents the basis for understanding how mutations caused by diseases such as cancer or neurodegenerative disease affect their underlying molecular framework.

Proteins —just like the different species at the macroscopic level, via competitive or symbiotic interactions— do not act in an isolated manner but rather coordinate amongst themselves in order to carry out their functional  roles.  These biological  relationships  explain  why  there  is  a tendency in evolution to introduce coordinated changes in proteins, which allow for the preservation and modulation of these relationships.

“The development of new, more powerful and more reliable mathematical methods than those available in the 1990s is allowing us to explore these biological problems at the molecular level, and provide a deeper vision of the Darwinian process,” says Valencia. “These methods based on coevolution are like a telescope, helping us to observe and understand biological and molecular processes.”

In the revision, the authors describe those mathematical methods that, based on evolutionary principles, are capable of predicting molecular interactions at different levels of complexity.

These methods include those approaches from the 1990s that predicted contact points between proteins; those that allow us to understand binding selectivity between very similar proteins -or ones that belong to the same family- and their ligands; or even, at a deeper level of complexity, those that predict interaction networks between the thousands of proteins that make up cells.

Over the last 20 years, Valencia’s team has led several lines of research related to this field, many of which are still being studied by many other groups and in which his team continues to be a world leader.

“In 2012, we published a new set of predictions on the specificity of the binding of the Ras oncogene to other proteins. The tool was based on coevolution methods that we had developed a couple of years ago, and that are now being widely explored by other groups,” explains Valencia. The Ras protein family is associated with a wide spectrum of cancers, so learning the language it uses with other proteins that are important for cells might open avenues for the development of novel drugs.

The authors of the study foresee a promising future for this field, in which bioinformatics programmers, physicists, biologists and mathematicians join forces in order to describe the complexity of protein dynamics.

“In the long term, we hope that unifying these methods will help us to manipulate or create new drugs that selectively target abnormal cells and therefore reduce side effects,” says de Juan. 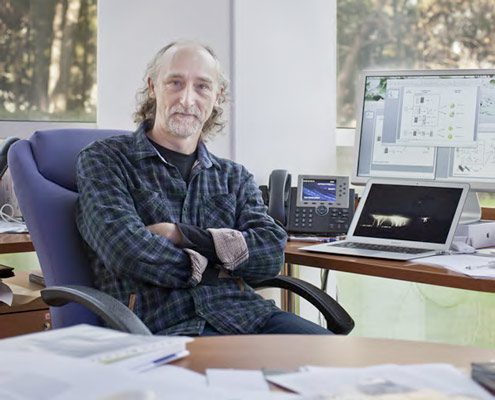