The pluripotency factor NANOG, in addition to contributing to embryonic development, regulates cell proliferation in epithelia of the skin and oesophagus in adult organisms

NANOG is increased in patient-derived tumour samples from stratified epithelia, such as the oesophagus or the skin

Scientists from the Spanish National Cancer Research Centre (CNIO) have discovered that NANOG, an essential gene for embryonic stem cells, also regulates cell division in stratified epithelia—those that form part of the epidermis of the skin or cover the oesophagus or the vagina—in adult organisms. According to the conclusions of the study, published in the journal Nature Communications, this factor could also play a role in the formation of tumours derived from stratified epithelia of the oesophagus and skin.

The pluripotency factor NANOG is active during just two days previous to the implantation of the embryo in the uterus (from day 5 to day 7 post- fertilization). At this critical period of development, NANOG contributes to giving embryonic stem cells the extraordinary capacity to make up all of the tissues that become the adult organism, an ability technically known as pluripotency.

Up until now, it was thought that the function of NANOG was limited to the above-mentioned developmental stage immediately prior to implantation. The CNIO study, led by Manuel Serrano and Daniela Piazzolla, however, shows that NANOG also plays a role in the adult organism.

After analysing the presence of NANOG in different mouse tissues by immunohistochemistry, the CNIO team demonstrated that, in addition to being present in embryonic tissue, this factor is also found in stratified epithelia such as the oesophagus, skin or vagina.

NANOG IS LINKED TO TUMOURS DERIVED FROM STRATIFIED EPITHELIA

Furthermore, the researchers studied a line of mice that can be programmed to induce the NANOG factor over a limited period of time. As described in the article, when NANOG was increased in these mice, the epithelia showed an increase in cellular proliferation, hyperplasia, and an increase in the amount of DNA damage in the cells.

“Using genome-wide analysis, we demonstrate that this factor is able to specifically regulate cell proliferation in these tissues, and it does it by means of the AURKA protein that is involved in the control of cell division”, says Serrano.

The authors of the work also show that NANOG is increased in patient- derived tumour samples from stratified epithelia. Furthermore, when they blocked the action of the gene using RNA interference, the cell proliferation index was reduced.

“This tells us that these cancerous cells depend on NANOG activity to maintain their high proliferation rate and oncological properties”, says Serrano.

The study has benefitted from the participation of CNIO researchers Marcos Malumbres and Ignacio Pérez de Castro, who are experts on protein AURKA and its role in the cell cycle. This work has been funded by the Ministry of Economy and Competitiveness, the European Union, the Community of Madrid, the Botín Foundation, the Ramón Areces Foundation, and the AXA Foundation. 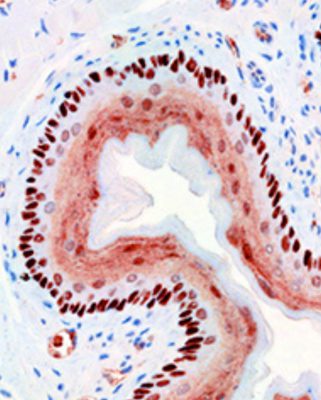