The study has been conducted on obese mice and monkeys, using a drug which inhibits the activity of the PI3K enzyme

Researchers from the Spanish National Cancer Research Centre (CNIO) have shown that partial pharmacological inhibition of the PI3K enzyme in obese mice and monkeys reduces body weight and physiological manifestations of metabolic syndrome, specifically diabetes and hepatic steatosis (fatty liver disease), without any signs of side effects or toxicities. The work, published in the journal Cell Metabolism, is a collaborative project between the Tumor Suppression Group headed by Manuel Serrano at the CNIO (Madrid, Spain) and the Translational Gerontology Branch headed by Rafael de Cabo at the U.S. National Institute on Aging, National Institutes of Health (NIH, Baltimore, MD, USA), with participation of the NeurObesity group of CIMUS led by Miguel Lopez at the University of Santiago de Compostela (Santiago de Compostela, Spain).

The PI3K enzyme (phosphatidylinositol-3-kinase) regulates the balance between the production of biochemical cellular components (anabolism) and the use of nutrients (catabolism) that occurs in cells. Specifically, this enzyme promotes cellular anabolism, a process that can lead to the induction of growth and multiplication of cells, and ultimately could lead to cancer.

For this reason, scientists working in cancer research have been long pursuing pharmacological inhibitors of PIK3. This is the case of the CNIO, which has developed its own experimental inhibitor, CNIO-PI3Ki, currently being studied for applications in cancer treatment in combination with other compounds. As part of the characterization of the PI3K inhibitor and to understand how it affects the balance between the use and storage of nutrients in the body, the Serrano team decided to study the effects of CNIO-PI3Ki on metabolism.

“At this point we have veered away from the original anticancer aspects of these inhibitors. In our previous studies, we had seen that one of the normal physiological functions of the PI3K enzyme is to promote the storage of nutrients. We found this to be of particular interest because it is precisely this type of manipulation, regulation of the balance between storage and use of nutrients, that is sought after in treating obesity,” explains Ana Ortega-Molina, the first author of the study, who is currently working at the Memorial Sloan-Kettering Cancer Center in New York.

STUDIES IN MICE AND MONKEYS

To test the effect on metabolism, scientists working at the CNIO administered small doses of the CNIO-PI3Ki inhibitor during 5 months to obese mice who were fed a high-fat diet. During the first 50 days, the obese animals lost 20% of their body weight, at which point their weight stabilized. The treatment was administered for 5 months and during the whole time the mice maintained a stable weight (20% below the weight of non-treated obese mice), despite continuing feeding with a high-fat diet. They also improved their pathological symptoms of diabetes (high glucose levels in the blood) and hepatic steatosis (fatty liver).

“When it comes to obesity, constant weight loss can be extremely dangerous. The ideal solution is to alter the balance between the use and storage of nutrients, to strike a new balance in which there is greater use and less storage,” explains Elena López-Guadamillas who, in collaboration with Ana Ortega-Molina, carried out most of the experimental work. This study showed that the drug had no side-effects and did not produce irreversible effects on metabolism, which is also desirable for its possible future use as a treatment in humans.

In non-obese animals that were fed a standard diet, the administration of the drug had no effect, which is another guarantee of safety. “This shows that the activity of the PI3K enzyme is only relevant when there is an excess of nutrients, that is, a high-calorie or high-fat diet,” adds López- Guadamillas.

In collaboration with the U.S. National Institutes of Health (NIH), scientists from the CNIO tested the CNIO-PI3Ki compound on obese monkeys (macaques). To ensure higher safety margins, a very low dose was administered. Even so, the daily treatment of these obese animals over a 3-month period reduced the total amount of fatty tissue by 7.5% and improved the symptoms of diabetes.

Obesity is one of the most important risk factors within the spectrum of serious diseases that constitute the metabolic syndrome. Many pharmacological agents have been discovered that lead to weight loss, but often with unacceptable toxic effects (partly due to the fact that these previous agents act on the brain centres that control appetite). In this respect, CNIO-PI3Ki seems to be the exception, at least in animal models thus far, as no such side-effects have been observed, even after long-term treatments (5 months in mice and 3 months in monkeys).

A series of safety characteristics that have been demonstrated in mice is shown below:

The next logical step, once the beneficial effects of CNIO-PI3Ki have been demonstrated in obese mice and monkeys, is to perform clinical trials on humans. “The leap from animals to humans is complex, expensive and full of uncertainties. Many treatments that are promising in animals turn out not to be effective in humans or toxicities appear that were not observed in animals. But, obviously, in spite of the uncertainties, we have to give it a try,” says Manuel Serrano. “Clinical trials require large investments and are undertaken with the aim of marketing a treatment. We are very optimistic about the possibility of entering into an agreement soon with a multinational pharmaceutical company interested in carrying out clinical trials with CNIO-PI3Ki to treat obesity and metabolic syndrome in humans,” says Serrano.

Work at the CNIO has been funded by the Ministry of Economy and Competitiveness, the European Union, the European Research Council (ERC), the Autonomous Community of Madrid, the Botín Foundation and Banco Santander through its Santander Universities Global Division, the Ramón Areces Foundation and the AXA Foundation. Work at the NIA is conducted as part of the Intramural Research Program of the U.S. National

Institute on Aging, National Institutes of Health. Contribution from the University of Santiago de Compostela has been founded by the European Research Council (ERC Starting Grant) and Xunta de Galicia. 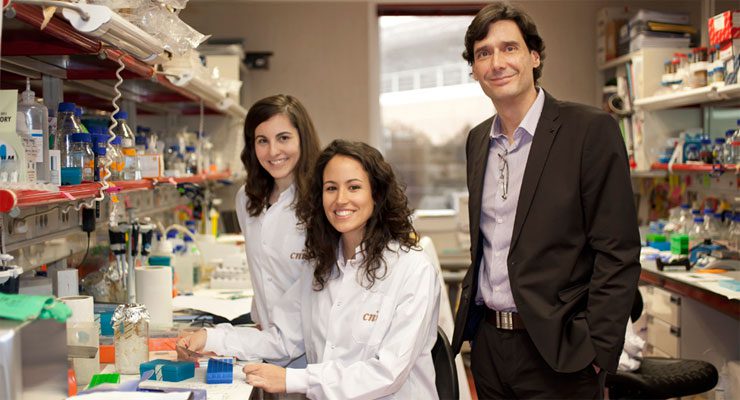