In 2008, the Telomeres and Telomerase Group led by Maria A. Blasco at the Spanish National Cancer Research Centre (CNIO) was one of the first to discover TERRAs, long non-coding telomeric RNAs that are transcribed from telomeres are are part of the telomeric chromatin. Since then, this group has set out to decipher the function of these novel and still mysterious telomeric components. In a paper published now in Nature Communications, Maria A Blasco and her collaborators Juan José Montero and Isabel López de Silanes, have taken an important step forward by discovering that TERRA play a decisive role in the assembly of telomeric heterochromatin. The authors discover that TERRAs are able to interact with components of the polycomb complex (PRC), an important epigenetic regulator of gene expression, and in this manner they facilitate the assembly of telomeric heterochromatin. 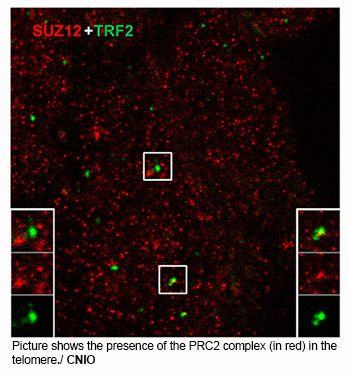 In human cells, the majority of TERRAs are transcribed from the long arm of chromosome 20. “These are one of the newest telomere components, and at the moment there is very little information about what they do in vivo”, says Blasco, director of this research.

The discovery in 2016 by the CNIO team of the genomic origin of these RNAs in human cells allowed Blasco and her colleagues to first generate cells knock out for the TERRA locus and to demonstrate a role for TERRA in telomere protection and maintenance, but at the same time raised certain questions… “One of the questions we had was whether TERRAs deletion affected telomeric chromatin in any way, because we previously described that telomeric chromatin was enriched in heterochromatic marks that were important for telomere length regulation”, explains Blasco.

Telomeres are part of the heterochromatin or silenced chromatin. In the past, the Blasco Group has demonstrated that telomeres are enriched in histone trimethylation marks, which are characteristic of heterochromatin. The Group also showed that these marks were important negative regulators of telomere length and telomere recombination.

To ascertain the possible relationship between TERRAs and telomeric chromatin, the authors studied telomere heterochromatin marks in cells deficient for TERRA. They found that in the absence of TERRA telomeres showed decreased heterochromatic marks, including loss of a histone mark which was not previously recognized at telomeres, H3K27 trimethylation, which is known to be catalysed by the Polycomb complex, a master regulator of gene silencing.  They further demonstrated that TERRAs interact with components of the Polycomb complex, and that this interaction is important for establishment of telomeric heterochromatin.

“Polycomb was known to be important for silencing certain genes and also for the correct compaction of large DNA structures, but so far, its function had not been associated with the epigenetic status of telomeres”, explains Montero. “With this study, we show that Polycomb is important in the establishment of telomeric chromatin through interaction with TERRA”, he adds.

On the one hand, the relationship between TERRAs and Polycomb is interesting, since the Polycomb has been involved in many important physiological processes such as maintenance of stem cell identity and cell differentiation, as well as in cancer. On the other hand, telomeres are essential also for cancer and aging.

“This finding is important to understand the biology of telomeres, but it is still too early to say whether TERRAs are related in some way with ageing and age-related diseases. We are generating mouse models without TERRAs in order to observe their function in normal development and in various pathologies”, concludes Blasco.

This research has been financed by the Spanish Ministry of Economy, Industry and Competitiveness (MINECO), World Cancer Research (WCR) and the Botín Foundation, Banco Santander –through Santander Universities–. 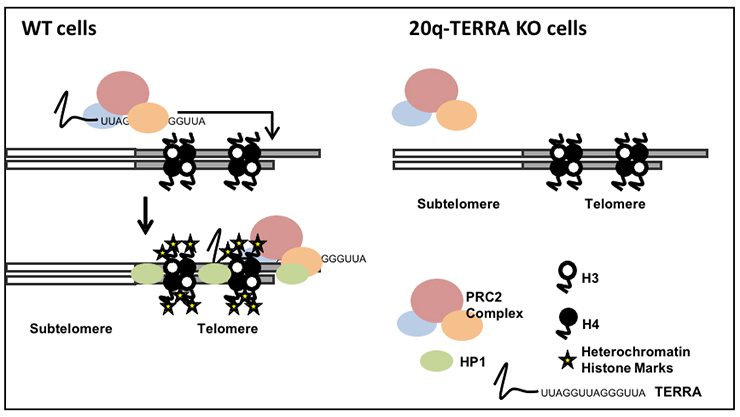 Diagram showing how TERRAs regulate the status of telomeric chromatin. After binding to the PRC2 complex TERRAs is able to bring the complex to the telomere. Upon that binding PRC2 make possible the deposition of different heterochromatin marks. In the absence of TERRAs that events cannot take place./CNIO