Telomeres, the protective structures located at the ends of chromosomes, also need their own protective elements

The molecules that fulfil this function are called TERRA and, according to new research, their role is decisive in preserving telomeres

The paper, published in Nature Communications, also identifies the exact point at which TERRA originate: the long arm of chromosome 20 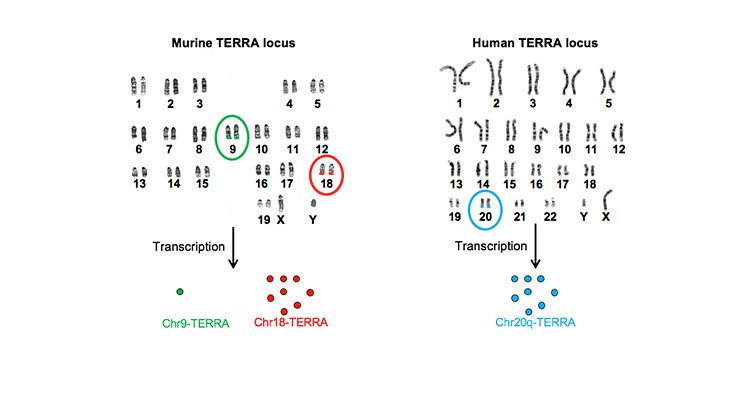 Despite their especially compact structure that is difficult to access, telomeres transcribe information like the rest of the DNA. The RNAs resulting from this process are called TERRA and their function is essential in preserving these protective structures. This is the conclusion of a new study by the Telomere and Telomerase Group at the Spanish National Cancer Research Centre (CNIO), which has also located the part of the human genome where these molecules are “manufactured”.

This finding is consistent with the observations made two years ago by the same group, lead by Maria A. Blasco. On that occasion, they were working on mouse cells and they observed that the TERRA that protect the 20 chromosomes of this mammal originated exclusively in pair 18 and, to a lesser extent, in number 9.

In the case of humans, the results now published in Nature Communications indicate that these RNAs are transcribed exclusively at one point. Juan José Montero, Isabel López de Silanes, Osvaldo Graña and Blasco, authors of the paper, analysed 18 RNAs previously proposed as possible TERRA but only those arising from the long arm of chromosome 20 (20q) and at the short arm of chromosome X (Xp) showed TERRA features.

To demonstrate that the RNAs transcribed at these two points were, indeed, TERRA, the authors genetically removed both loci using the CRISPR-CAS9 technology. They then noted that while the suppression of Xp had no significant consequences, the suppression of 20q had extremely negative effects on telomeres.

“Identification of 20q as one of the major locus for human TERRA generation allows us to address the role of TERRA telomere biology,” write the authors. After removing it in various cellular lines, they saw that there was a significant increase in DNA and telomere damage, as well as an increase in chromosome instability.

This is the first time that the crucial role of TERRA in the preservation of telomeres has been demonstrated in any organism. “These results are striking because they clearly demonstrate that TERRA play an essential role in cell viability as well as in preserving telomeres; they are just as important to the functioning of telomeres as telomerase or shelterins, the proteins that protect the telomeres,” explains Blasco.

The discovery of the 20q region as the source of TERRA and the confirmation of the key role played by these RNAs in preserving telomeres opens the door to the study of certain syndromes in which alterations in this chromosomal region have been detected. Also, it offers a new path in the study of patients with telomeric disorders in which, however, no alterations in the genes normally involved -telomerase, shelterins- have been found.

This study was funded by grants from funded by the Spanish Ministry of Economy and Competitiveness, the Madrid Regional Government, Boti?n Foundation and AXA Research Fund.