Journal of Hepatology. CNIO researchers link telomeres to the origins of liver diseases such as chronic hepatitis and cirrhosis

Researchers have generated a mouse with dysfunctional telomeres in the liver and, as a result, it developed cellular alterations present in human diseases such as hepatitis or cirrhosis

This study is the first to show that alterations in the functioning of telomeres lead to changes in the liver that are common to diseases such as hepatitis and cirrhosis, which are associated with an increased risk of liver cancer

This finding provides the basis for understanding the molecular origin of these diseases, as well as identifying new therapeutic strategies for their prevention and control

Telomeres are DNA regions at the ends of our chromosomes that protect the genetic data of cells, preventing mutations and alterations in the DNA that could potentially cause disease. Telomeres shorten throughout life in a process involving both genetic and environmental factors. Telomere dysfunction —alterations in the structure and/or functioning of telomeres— is one of the molecular mechanisms underlying a number of age-related diseases but, to date, little is known about its possible role in pathologies of the liver such as cirrhosis, hepatitis and liver cancer.

In a study published in the Journal of Hepatology, Fabian Beier and Paula Martínez —from the Spanish National Cancer Research Centre´s (CNIO) Telomere and Telomerase Group led by Maria Blasco— have created a mouse model that recapitulates the origin of human diseases associated with long-term or chronic liver damage, such as hepatitis or cirrhosis of the liver which, in turn, can progress to liver cancer over time. This new mouse model reveals telomeric dysfunction as a potential factor in triggering these diseases.

In order to study the relationship between telomeres and liver damage, the researchers generated a mouse line deficient in TRF1 protein in the liver, thus leaving the telomeres in hepatic cells unprotected and compromising their function. TRF1 forms part of a protective complex of our telomeres called shelterin (from the word shelter), which protects our genetic material.

When researchers subjected the mice with TRF1 deficiency to chronic stress by administering the hepatotoxic agent CCl4 —responsible for liver toxicity— they observed that hepatic cells, in addition to containing multiple nuclei, also presented characteristics that are typical of patients with cirrhosis or hepatitis, such as an increase in cellular markers p21, cyclin D1 or PCNA.

“These studies identify telomeres as a new molecular route implicated in the origin of liver diseases such as cirrhosis, hepatitis or liver cancer, as well as novel therapeutic approaches to prevent and combat them,” concluded the researchers.

This research has been funded by the Spanish Ministry of Economy and Competitiveness, the European Union and the Lilly Foundation. 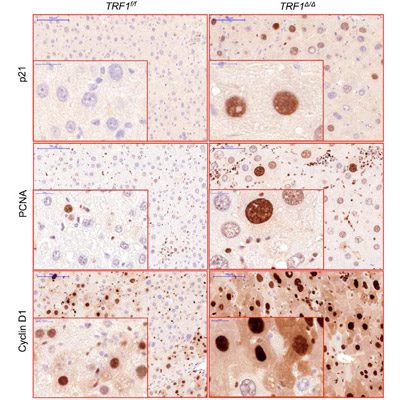 Liver cells lacking TRF1 gene (right) show, under chronic stress, larger nuclei and other markers characteristic of patients with cirrhosis or hepatitis (an increase in p21, PCNA and cyclin D1), when compared to normal cells under the same stimulus (left). / CNIO