Cell Reports. CNIO researchers show that telomeres are linked to the origins of idiopathic pulmonary fibrosis

They have created the first mouse model that reproduces the appearance and development of the disease in humans. There is currently no effective treatment for idiopathic pulmonary fibrosis, an illness that can prove fatal within a few years

In the murine model, the accumulation of cellular damage caused by short telomeres, something that normally occurs associated with aging, together with environmental damage, results in the disease

Idiopathic pulmonary fibrosis (IPF) causes a gradual loss of respiratory capacity and can be lethal within a few years. The cause is unknown, although it can be attributed to a combination of genetics and the environment. A team of researchers from the Spanish National Cancer Research Centre (CNIO) have now discovered that telomeres, the structures that protect the chromosomes, are at the origin of pulmonary fibrosis. This is the first time that telomere damage has been identified as a cause of the disease. This finding opens up new avenues for the development of therapies to treat a disease for which there is currently no treatment.

This work, carried out by Juan M. Povedano and Paula Martínez from the Telomeres and Telomerase Group at CNIO led by Maria A. Blasco, with the participation of researchers from the CNIO Molecular Imaging Core Unit and from the Complutense University of Madrid, is being published this week in the journal Cell Reports.

Idiopathic pulmonary fibrosis is a respiratory disease ? affecting about 8,000 people in Spain ? in which scars are formed in lung tissue that make it rigid, leading to breathing difficulties. In the absence of a single and determinant cause, researchers compile clues that piece together different parts of the problem. One is that the exposure to environmental hazards, such as radiation, smoking or pollution, greatly increases the risk.

Other clues already pointed to the telomeres. For example, the telomeres of many patients suffering from idiopathic pulmonary fibrosis are shorter than normal. Furthermore, pulmonary fibrosis is one of the most frequent illnesses among people with mutations in genes involved in telomere maintenance. These data suggest that there is an association between telomere defects and the disease, but demonstration of causation was pending.

In search of a cause-effect relationship, CNIO researchers created a mouse that lacked a protein needed to build telomeres in a specific cell population — type II alveolar cells — and which is indispensable for lung tissue regeneration.

The results left no room for doubt: most of the animals developed progressive pulmonary fibrosis. The researchers, after finding that the lack of telomeres is lethal for type II alveolar cells, reached the conclusion that lung epithelium cannot regenerate without these cells and, therefore, cannot repair damage caused by toxic environmental agents.

A MODEL THAT REPRODUCES THE DISEASE IN HUMANS

Although the mouse lacking telomeres in pulmonary epithelial cells proves the importance of telomeres in the origin of fibrosis, it does not however reproduce the disease in most human patients.

In humans, environmental hazards play an important role in the disease. Furthermore, short telomeres are also a feature of the disease. Very short telomeres are a permanent damage to cells and they stop dividing. When this happens, pulmonary tissue will cease to regenerate, and instead, a “protective” programme against damage will be triggered that causes scar formation — which leads to fibrosis.

The researchers therefore developed an animal model that combines premature shortening of the telomeres due to telomerase deficiency, with low doses of environmental damage. To induce damage they chose bleomycin, a drug that affects the genetic material of cells and inhibits cell division when administered in high doses, but not enough to cause pulmonary fibrosis in normal mice at the low doses administered by the authors.

“These findings support a model in which persistent damage derived from short or dysfunctional telomeres is added to other cellular damage and this triggers pulmonary fibrosis,” says Povedano.

The new animal models are essential for testing new “therapeutic strategies based on the activation of telomerase [the enzyme that repairs telomeres],” concludes the paper in Cell Reports.

A LINK TO AGEING

This new evidence, which focuses on telomeres, fits in well with the fact that idiopathic pulmonary fibrosis only occurs in people over 50 years of age; it is precisely in the telomeres where one of the main molecular symptoms of cellular ageing occurs. Telomeres become shorter each time a cell divides; the older the organism, the greater the number of divisions and the shorter the telomeres.

Blasco asserts: “Understanding the molecular mechanisms that lead to the ageing process, such as the shortening of telomeres, has enabled us to generate animal models that faithfully reproduce diseases such as idiopathic pulmonary fibrosis, and this is already helping us to test novel therapies that we hope will prove effective and that are based on the activation of the enzyme telomerase.”

The study has been funded by the Ministry of Economy and Competitiveness, the European Union, and the Botín Foundation and Banco Santander through Santander Universities. 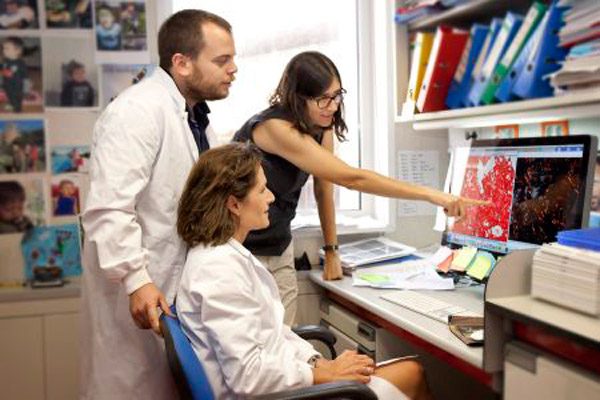