The human enzyme PrimPol, which is also present in ancestral archaebacteria, encourages DNA repair when there is damage

PrimPol allows cells to make copies of their DNA even when it is damaged, and prevents breaks in the chromosomes

Every day, the human body produces new cells to regenerate tissues and repair those that have suffered injury. Each time this happens, the cells make copies of their DNA that they will pass on to the resulting daughter cells. This process of copying the DNA, also called replication, is very delicate, given that it can generate severe alterations in the DNA that are associated with malignant transformation or ageing.

Researchers from the Spanish National Cancer Research Centre (CNIO), led by Juan Méndez, head of the DNA Replication Group, together with Luis Blanco, from the Severo Ochoa Molecular Biology Centre (CBM?CSIC), have discovered how a new human enzyme, the protein PrimPol, is capable of recognising DNA lesions and facilitate their repair during the DNA copying process, thus avoiding irreversible and lethal damage to the cells and, therefore, to the organism.

The results are published in the online edition of the journal Nature Structural and Molecular Biology. This study represents the continuation of a prior study, published recently by the same researchers in the journal Molecular Cell, in which they described the existence and biochemical properties of the PrimPol enzyme.

The DNA that resides in the nucleus of cells is the carrier of the genes, the instruction manuals that dictate how the cell works. “DNA structure is very stable, except during replication which normally takes approximately eight hours in human cells; during that period it becomes more fragile and can break”, says Méndez. These eight hours are therefore critical for cells: they have to ensure the fidelity of copying DNA, and if errors are found or the DNA is damaged, they have to repair them as efficiently as possible.

DNA polymerases are the enzymes responsible for synthesising new DNA. “When a DNA polymerase finds an obstacle in the DNA [a chemical alteration introduced by solar ultraviolet radiation, for example], the copy is interrupted and the process stops until the error is repaired. This interruption can cause breaks in the DNA, translocations of fragments from some chromosomes to others, and even cause cell death or malignant transformation”, says Méndez.

The research carried out by CNIO and CSIC demonstrates that the PrimPol enzyme prevents the copying process from being interrupted when there is damage: it recognises lesions and skips over them, and they are repaired when the copy is finished.

In evolutionary terms, PrimPol is a very old enzyme, and similar proteins have been found in archaebacteria, one of the first life forms that inhabited the Earth. “Millions of years ago, life conditions were more difficult [high salinity, extreme temperatures, etc.], so PrimPol has probably adapted to synthesising DNA in these conditions that encourage damage”, says Méndez, adding that: “in exchange, these primitive DNA polymerases are less exact than the more evolved copying systems and can introduce mutations”.

The scientists anticipate that this increase in mutations could have played a key role in the evolution of genomes, as well as having an impact on the ageing of cells and the development of cancer. Having identified and characterised this new protein in human beings, the researchers tell us that they are already studying its role in disease development. 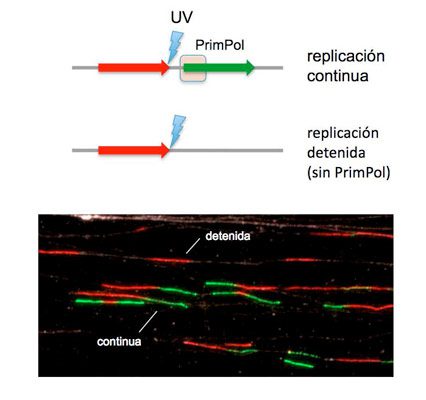