The discovery, shared with researchers from the Centre for Genomic Regulation (CRG) is presented in two articles in 'Cell'

Senescence is one of the most studied processes in relation to cancer and ageing, but had never been associated with normal embryonic development

Researchers postulate that senescence appeared during evolution as a developmental mechanism: as the embryo grows and its different tissues change, senescence switches off cells that are no longer necessary

The two groups of researchers have observed senescence in chicken, mouse and human embryos

One of the main mechanisms the body uses to protect itself against cancer is to switch off defective cells by making them senescent; these cells do not die but stop dividing: their life cycle stops. A team of researchers from the Spanish National Cancer Research Centre (CNIO) in Madrid and another one from the Centre for Genomic Regulation (CRG) in Barcelona have discovered, and are publishing in two articles in the journal Cell, that this switching?off mechanism also takes place in embryos, and not as a response to cell damage but as part the normal process of development. As the embryo grows, and its tissues change shape and function, senescence switches off cells that are no longer necessary. These switched-off cells are later on recognized and eliminated by a special type of cells of the immune system known as macrophages. The occurrence of senescence during embryonic development has important implications for understanding how the body grows and is shaped.

“We have discovered that cellular senescence is a tissue remodelling mechanism during embryo development”, says Manuel Serrano, head of CNIO’s Tumour Suppression Group and leader of the study, whose first author is Daniel Muñoz-Espín. “Embryo development is full of recycling: tissues with one function at one point in the process are used for something different further down the line; in this redesigning process, there are cells that are no longer needed, and one way of getting rid of them is to make them senescent”. The CRG study was led by Bill Keyes, and the first author is Mekayla Storer.

Senescence is one of the most studied cellular processes because of its relationship to cancer and ageing. It is often presented as a double-­edged sword: both as protection against cancer and for its important role in the ageing of the body. The authors of the present study, however, warn against the simplistic idea that ageing is a consequence of senescence. “In my opinion, senescence is a fundamentally beneficial process, whose goal in adult organisms is to eliminate damaged cells”, says Serrano, “what happens is that when we get old there are more damaged cells and consequently there is more senescence”. In other words, blaming senescence for ageing is like blaming firefighters for fires just because they are always next to a fire.

The two new articles published in Cell offer a new perspective on the concept of senescence. The researchers have not only detected senescence in the embryo: they have also identified the genes that activate and regulate the process, and have studied what happens when they prevent senescence experimentally. To distinguish senescence as a defence mechanism from senescence in normal embryonic development, they term the latter process programmed senescence.

Furthermore, they conclude with a provocative hypothesis: senescence appeared during evolution as a developmental process and, later on, the invention was adapted as a defence mechanism for adult organisms. “Conceptually, we add cellular senescence to the collection of processes that contribute to embryonic development”, say the authors in Cell. “This opens up the possibility that cellular senescence originated during evolution as an embryonic tissue-remodelling process, a function that later evolved to become a damage and stress response”.

The CNIO authors worked with mouse and human embryos, whilst the CRG team worked with chicken and mouse embryos, and they observed senescence in the three species. They highlight that this “supports the idea that senescence is widespread during the embryonic development of vertebrates”.

Senescence leaves a characteristic chemical signature in cells. CNIO researchers looked for it specifically in two embryo structures: the mesonephros and the endolymphatic sac. The mesonephros is a tissue that functions as a kidney during development and later almost completely disappears; what remains of it is a tube that ends up forming the vas deferens and the epididymis in the testicles and it participates in the formation of the vagina. The endolymphatic sac is an important structure of the inner ear. The CRG researchers decided to focus on the formation of the brain and the fingers.

Regarding the genes involved in programmed senescence, it turns out that they are the same for the mesonephros and for the endolymphatic sac: “It is telling that two independent developmental processes share not only the same critical effector but also the same regulatory routes”, say the authors in their article in Cell.

The gene that activates the process, in the two structures analysed, and in both mouse and human embryos, is called p21. Thus, when p21 cannot act there is no senescence and, despite partial compensation of this defect by other mechanisms, it is possible to detect problems in the formation of the vagina, for example.

What happens in embryonic tissues once programmed senescence has switched off the unwanted cells? It is then the turn of the macrophages, cells of the defence-system that eliminate useless cells, thus remodelling the tissue.

The authors consider this to be a first study that opens up new horizons. Soon, they say, programmed senescence will be detected in many other developmental processes.

The research has been supported by the Ministry of Economy and Competitiveness, the Madrid regional government, the European Research Council, the Botín Foundation, the Ramón Areces Foundation and the AXA Foundation. 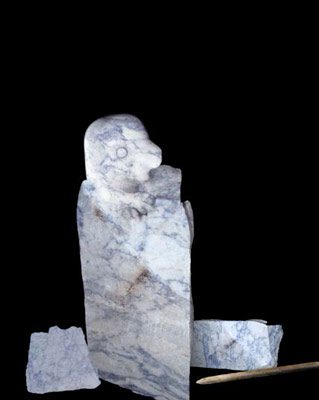 Allegorical design of the role of senescence during tissue remodelling in the embryo, by artist Daniel Alonso. /CNIO