Science Advances. Scientists from the CNIO and IRB Barcelona assemble the γ-tubulin ring complex in vitro for the first time 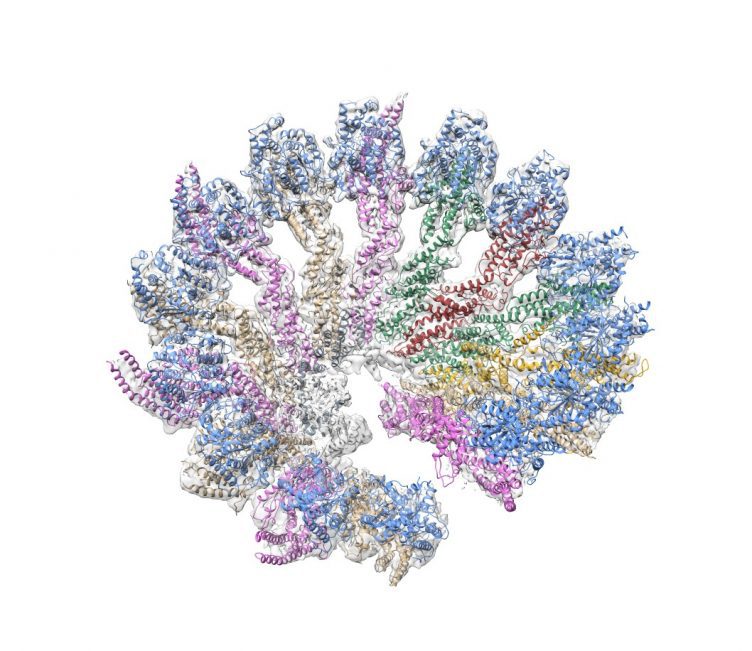 The results have been published in ‘Science Advances’

Researchers from the Microtubule Organization lab, headed by Jens Lüders at IRB Barcelona, and the Macromolecular Complexes in DNA Damage Response Group, led by Oscar Llorca at the Spanish National Cancer Research Centre (CNIO), have achieved the first in vitro reconstitution of the human g-tubulin ring complex (γTuRC), responsible for initiating microtubule formation. In addition, they revealed its 3D structure by cryo-electron microscopy. The key to their success lies in the identification of the RUVBL protein complex as an essential γTuRC assembly helper.

Microtubules are a component of the cytoskeleton, which is essential for intracellular transport processes and cell division. Microtubules cannot form spontaneously in cells but require nucleation by the γTuRC. Mutations in γTuRC subunits cause neurodevelopmental defects such as microcephaly and have also been linked to defects in the retina.

“Although the γTuRC was discovered 25 years ago, the field had not been successful in producing it recombinantly in vitro,” says co-corresponding author Jens Lüders, “this new achievement opens the door to studies aimed at elucidating the microtubule nucleation mechanism and how it is regulated”. It will also allow the study of the mutations found in patients and predictions of their effects, to better understand how they cause disease.

The RUVBL protein complex, essential for the construction of the γTuRC

The difficulty to assemble the γTuRC in vitro is due not only to its complex 3D structure but also to the need of RUVBL for the assembly and formation of the ring-shaped gTuRC. “When I started this project I analyzed previously published data, and noticed that a requirement for RUVBL in γTuRC assembly had never been considered before – it was very gratifying to see that this was indeed the key to our success” explains first author Fabian Zimmerman, PhD student in the Microtubule Organization lab at IRB Barcelona.

“Our group has been exploring the function of RUVBL in the assembly of large macromolecular structures relevant to cancer for years. Discovering that RUVBL is also essential for the formation of γTuRC opens new avenues of research to understand how cells build complex functional structures,”  says co-corresponding author Oscar Llorca.

“γTuRC is a very large structure built by multiple and interconnected subunits. Determining its 3D architecture has been an immense challenge, made possible by advances in cryo-electron microscopy methods that allowed us to observe individual molecules of this complex with extremely high detail ”, explains co-first author Marina Serna.