Nature Reviews Microbiology. An international team reviews the latest advances in the understanding of the molecular mechanisms of tuberculosis 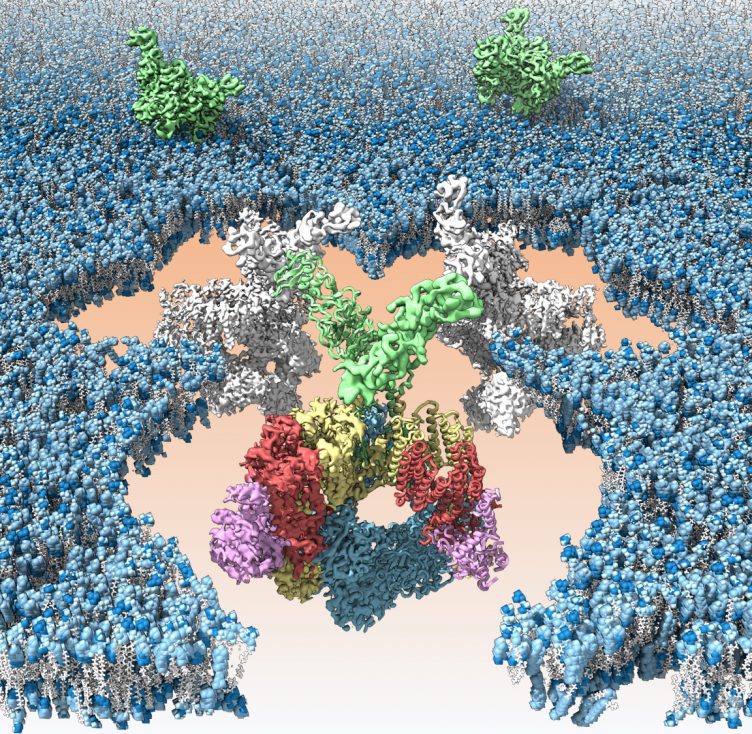 Artist’s rendering of the subcomplex that constitutes the T7SS secretion system of 'M. tuberculosis' embedded in the cell membrane. /CNIO

Tuberculosis is an infectious disease caused by Mycobacterium tuberculosis, a bacterium that usually affects the lungs and can spread to other organs. According to data from the World Health Organization (WHO), 10 million people contracted tuberculosis in 2019 worldwide; 1.2 million were children, and 1.4 million people died from the disease. Tuberculosis is regarded as the deadliest infectious disease in history, and is to this day among the 10 most lethal diseases in the world.

Although it is a curable and preventable disease, it represents a major public health problem worldwide -especially in developing countries, where it poses a major threat- due in part to resistance to anti-tuberculosis drugs among patients. Ending the tuberculosis epidemic is one of the urgent health goals of the Sustainable Development Goals set by the United Nations Organization (UNO) for the year 2030.

In 2019, a team led by researcher Óscar Llorca at the Spanish National Cancer Research Centre (CNIO) in collaboration with the group led by Sebastian Geibel at the University of Würzburg (Germany) published in the prestigious journal Nature an important finding that could provide a breakthrough in the search for new treatments for this and other bacterial diseases. These teams managed to obtain the first detailed visualisation at the atomic level of the secretion system (T7SS; Type 7 Secretion System) used by M. tuberculosis to inject virulence factors into cells and escape the body’s defences, allowing infection to progress.

The significant impact of these findings has led Llorca’s and Geibel’s teams to report their and others’ latest findings on this secretion system in the leading journal Nature Reviews Microbiology.

Thus, this literature review emphasises the advances made in the last year and a half that made it possible to describe in atomic detail not only the precise organisation of all the components that make up the T7SS, but also how they are organised on the surface of the bacterium to transport and secrete virulence factors for infection.

“The ultimate goal of these studies is to be able to design molecules that block the function of the T7SS, and thus provide treatments in addition to the antibiotics that are currently used to fight tuberculosis and against which bacterial strains develop resistance and thus become unresponsive,” the researchers say.