Nature Communications. A team from CNIO has found the way to generate potentially safer stem cells in the laboratory.
This project represents a major step forward in the possible therapeutic use of stem cells

Researchers have managed to rectify this damage using a simple modification to the culture medium, which produces potentially safer stem cells for use in regenerative medicine.

The paper has been published in the journal, ‘Nature Communications’

Damaged tissue, such as pancreas, heart, and neuronal tissue, which is regenerated to treat cardiovascular diseases, diabetes, or neurodegenerative diseases. This is one of the ambitious scenarios to which regenerative medicine aspires and that is being announced as one of the great promises of twenty-first century biomedicine for the treatment of a long list of diseases affecting people today. The focal point is the use of stem cells, which are capable of producing different types of cells or tissue.

2006 marked a turning point in this field, when the Japanese scientist, Shinya Yamanaka, managed to generate pluripotent stem cells in the lab for the first time. These are capable of becoming any type of cell, whether insulin-producing beta cells (pancreas) or cardiomyocytes (heart), and are known as iPS cells. This cell reprogramming technique eliminated one of the great ethical dilemmas of the time: until then, pluripotent stem cells could only be obtained from embryos which, in order to achieve this, had to be destroyed.

However, as Óscar Fernández-Capetillo, head of the Genomic Instability Group at the Spanish National Cancer Research Centre (CNIO), says: “the drawback of this new technology is that Yamanaka’s method damaged the stem cell genome, leading to certain safety concerns regarding these cells”. While the fact that the method damaged the DNA of iPS cells was known, the reasons were not.

According to an article published this week in Nature Communications, the team headed by Fernández-Capetillo states that the damage to the genome of iPS cells lies in a very specific kind of stress that the cells are subjected to during cell reprogramming: replication stress, which occurs when the cells increase the pace of division. In addition, and based on these findings, the authors of the paper have managed to develop strategies to reduce this type of stress, resulting in pluripotent stem cells with less damage to their genome.

The results represent a significant step forward regarding the possible use of iPS cells, because after almost a decade since they were developed, there is now a more efficient way of obtaining them, with less damage to the DNA, making them potentially safer.

The CNIO Telomeres and Telomerase groups, headed by María Blasco, and the Tumoral Suppression Group, headed by Manuel Serrano have also participated in this study, together with groups from the Pasteur Institute in Paris, Toronto University and the Pompeu Fabra University in Barcelona.

The nature of the damage to the DNA observed in iPS cells has been intensely discussed for some years, due to the fact that it is linked to the rearrangement of large fragments of chromosomes which could lead to potentially dangerous mutations if used clinically.

In a paper published in Nature in 2009, the team led by María Blasco, with the collaboration of Fernández-Capetillo’s group, described how the damage to the DNA had important consequences in cell reprogramming by limiting the process and making it less efficient.

Now the team headed by Fernández-Capetillo has not only identified the origin of the damage, replication stress, but has managed to reduce it significantly; potentially improving the safety of induced stem cells for use in biomedicine.

To reduce damage to stem cells and thus achieve more stable genomes, the scientists have used a dual approach: genetics, increasing the production of the Chk1 protein, which repairs DNA damage due to replication stress; and chemical, based on supplementing the medium in which the cells are fed with nucleoside, the source compounds of the bricks that build DNA.

“Based on previous research performed by the group, we knew that an additional input of nucleoside reduces replication stress, probably by facilitating the successful replication of DNA as it increases the rate of cell division during the reprogramming process”, explains Sergio Ruiz, whose signature appear in first place on the paper.

The simplicity of this nucleoside-based strategy means that it can be implemented easily by laboratories around the world working with iPS cells, and thus contribute significantly to the field of regenerative biology, one of the greatest aspirations of biomedicine this century.

The study was jointly funded by the European Union through the European Research Council (ERC), the Ministry of Economy and Competition of the Government of Spain, the Howard Hughes Medical Institute, and the Botín Foundation and Banco Santander, through Santander Universities, among others. 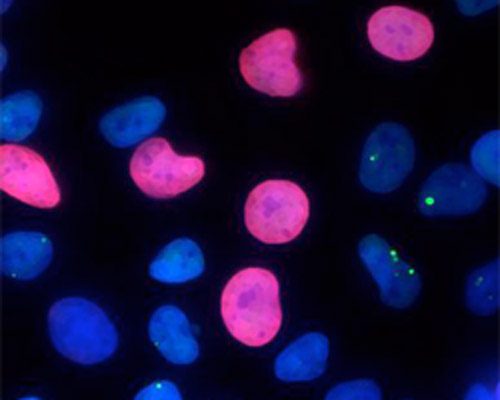