Cachexia, a syndrome that causes extreme thinness and weakness is the real cause of death of one third of cancer patients, and not the growth of the tumour itself. This study demonstrates that one of its causes is the process of transforming ‘bad’ fat into ‘good’ fat

The authors state that if the transformation of fat tissue can be inhibited, the symptoms of cachexia will improve, which can be considered as an important new therapeutic option

The study is published today in Cell Metabolism

Most cancer researchers are working on the biology of the tumour. However, Michele Petruzzelli, a member of Erwin Wagner’s group at the Spanish National Cancer Research Centre (CNIO), has been looking for ways to attack the disease indirectly. He focused on the effects of tumours on the rest of the body, and not on the tumour itself. His work on the body’s response to a tumour has uncovered that cachexia—the extreme thinness and weakness eventually being the real cause of death in one third of patients with cancer—is triggered by a process that is heavily studied not to fight cancer, but to fight obesity: the conversion of white fat tissue into brown fat tissue.

“It is the first time that this phenomenon we might call burning fat has been associated with a negative effect”, says Erwin Wagner, the Director of the BBVA Foundation-CNIO Cancer Cell Biology Programme. “What we observe is that the transformation of white fat into brown fat, currently one of the most researched subjects because of its potential effects on obesity and diabetes, has very severe consequences in the context of cancer”. The study is published in Cell Metabolism.

The researchers also argue that if it is possible to reduce the transformation of fat tissue, the symptoms of cachexia will improve, although they do not completely disappear. The authors demonstrate this by blocking mediators of inflammation, a process linked to cachexia, specifically, to the expression of the pro-inflammatory cytokine IL-6.

“Inhibiting the conversion of white fat into brown fat is therefore a promising way of improving cachexia for cancer patients”, the authors state in their article.

The CNIO has a large variety of animal (mouse) models for different types of cancer. The starting point for this study, says Petruzzelli, was to choose a dozen of these mouse models to investigate the changes that develop in their bodies as the tumour progresses. The researchers observed several changes in different organ systems, which varied depending on the animal model used as well as the tumour type. Nevertheless, a consistent white fat to brown fat transformation was observed in all organ systems very early, before any sign of cachexia became apparent.

There is a growing interest in this study because of its significance in two ways. It relates to the transformation of white fat into brown fat, which is beneficial to fight obesity and diabetes, but has a huge disadvantage in cancer-associated cachexia (CAC), which for different reasons has not been studied very much in the past. In recent years both approaches have become hot topics for researchers around the world.

The importance of the transformation process of white fat into brown fat in humans was only discovered a couple of years ago. Most fat in adult humans is white—white adipose tissue—and we know that its main function, but not its only function, is to store energy (those love handles). Brown fat, however, is burned to produce heat; baby fat and the fat of hibernating animals is like that. In the context of the current obesity epidemic, white fat has been labelled bad fat, while brown fat is the good one.

The discovery that adult humans can turn white/bad fat into brown/good fat via exercise or exposure to low temperatures has opened a new line of attack on obesity, and in fact the active search for pharmacological tools to induce the transformation of fat is well underway.

The work of Wagner’s group in the article in Cell Metabolism does not discuss the advantages or disadvantages of each type of fat, it rather highlights that a process that could be strengthened to fight obesity must be fought against in cancer patients.

As for cachexia, it is a less-studied phenomenon despite that doctors have known for a long time that the treatment is difficult and the prognosis negative. Next to patients with cancer, it also affects patients in advanced phases of many illnesses, including infectious diseases, such as AIDS or tuberculosis, and chronic illnesses, such as multiple sclerosis.

CAC has until recently been interpreted as a kind of self-cannibalism: the body ‘consumes’ itself while trying to supply the energy needs of the constantly growing tumour. Today we know that tumours of any size can cause cachexia, including very small ones, and even at very early stages of tumour development, which does not fit with the idea of self-cannibalism. Researchers have observed that the process does not respond either to the body’s greater need to generate heat.

These new data, and the often ignored fact that it is the cachexia associated with the tumour—and not the tumour itself—that causes the death of one third of cancer patients, has encouraged the study of this syndrome in recent years. It is now known that this process is tightly associated with inflammation, a hallmark of many cancer types.

This is why in their study Wagner and his group explore the link between inflammation, cachexia and the process of transforming white fat tissue into brown fat tissue. Their results indicate that if the activity of one of the agents that promotes inflammation—cytokine IL-6—is blocked, the fat transformation process is substantially reduced and, as a consequence, the cachexia. The researchers do point out that it is not a cure: IL-6 is just one of several cytokines involved in the process and blocking it is not enough.

A WAY TO PREVENT CACHEXIA

These novel results suggest that anti-inflammatory drugs could help fight cachexia, but there is a problem: the lack of knowledge about this syndrome is such that for now it is not possible to predict which cancer patient will develop cachexia. Furthermore, anti-inflammatory drugs have often side effects, and therefore these treatments cannot be used to prevent the appearance of cachexia in all cancer patients.

The current study in Cell Metabolism could open up a new way of discovering processes, eg the transformation of fat in the initial stages of cachexia. “It allows one to think of the possibility to identify biomarkers that would help to predict which patients are going to develop cachexia in a way we can treat them preventively”, says Petruzzelli.

The study was financed by the BBVA Foundation, the Ministry of Economy and Competitiveness and the European Union. 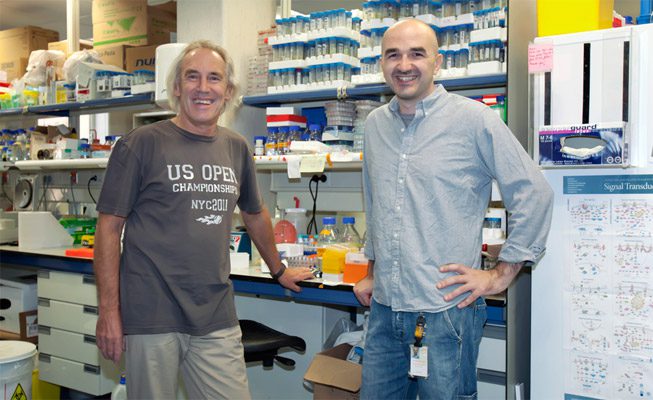