Biocomputational analysis reveal the first genetic connection between cancer and diseases such as Alzheimer, Parkinson and schizophrenia

The study has looked at 1,700 people from over 30 studies from around the world

Epidemiological studies demonstrate that diseases of the central nervous system such as Alzheimer, Parkinson and schizophrenia protect against cancer. The most remarkable example is Alzheimer’s disease, which can reduce the risk of suffering from cancer by up to 50%. Various theories have been put forward in an attempt to explain this relationship between diseases that at a first glance seem to be so different from the pharmacological, genetic and environmental perspective. However, the available results were not consistent enough to confirm these models.

Alfonso Valencia, researcher and Vice-Director of Basic Research at the Spanish National Cancer Research Centre (CNIO), today publishes the first evidence of a molecular relationship between cancer and central nervous system diseases in the journal PLOS Genetics. Specifically, the work identifies almost a hundred genes which could explain this relationship.

“We had previously published that several diseases of the brain and nervous system, particularly those which have a neurodegenerative component, are associated with a lower risk of cancer. We refer to this epidemiological evidence as inverse comorbidity,” explained Valencia, and added: “In spite of the evidence, we did not have the molecular details which could explain this protective effect, in other words, which genes could be behind this behaviour.”

To look further into this paradoxical relationship, the authors of the study used bioinformatics analysis to compare data on the genetic expression of nearly 1,700 people from over 30 studies of diseases in the central nervous system (Alzheimer, Parkinson and schizophrenia) and cancer (colon, lung and prostate cancer).

“It is precisely these genes, which are inversely activated, that could explain the lower risk of cancer in patients with nervous system diseases,” said the authors of the study.

César Boullosa and Kristina Ibáñez, pre-doctoral researchers in Valencia’s lab, highlighted that “up to 90% of the biological processes that appear to be augmented in cancer are diminished in the nervous system diseases analysed.”

This data demonstrates that the “global regulation of cell activity could have a protective effect from diseases with inverse comorbidity”, concluded the article.

“At the beginning of the project we did not really expect to get statistically significant results, so it came as a great surprise to find a clear genetic correlation between these two types of disease,” admitted Valencia, who explains that it is “the first time that a molecular relationship between these diseases has systematically been found.”

Among the genes identified in the study is PIN1, which was previously found to be associated with both Alzheimer’s disease and cancer, as well as genes involved in the p53 and Wnt signalling pathways. The study has also identified genes related to crucial life biological processes, such as cell metabolism and the communication between cells and their external environment.

The researchers propose that this genetic association amongst illnesses could open the door to the use of antineoplastic drugs to treat some nervous system diseases, as well as the other way round. One example of this practice is bexarotene, an antineoplastic agent that has already displayed beneficial effects for treating Alzheimer’s disease in mice.

The study represents an example of the new possibilities genomics and bioinformatics can offer in a comprehensive approach to complex diseases such as cancer or nervous system disorders.

The study has been conducted in collaboration with the psychiatrist Rafael Tabarés-Seisdedos, from the University of Valencia and the Center for Biomedical Research in Mental Health (CIBERSAM), and computational biologist Anaïs Baudot, from the CNRS in Marseille, France. It has been funded by the Ministry of Economy and Competitiveness and “la Caixa” Foundation. 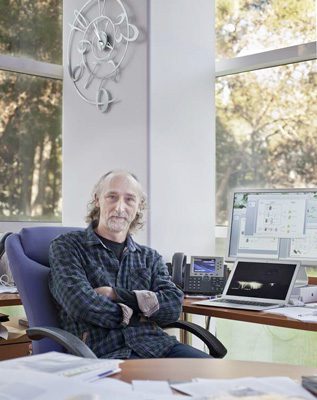