This new technology could be used to make ‘à la carte’ modifications to the genome, such as repairing genetic damage or modifying micro-organisms to generate biofuels

The Spanish National Cancer Research Centre (CNIO) Macromolecular Crystallography Group has managed to reprogramme the binding of a protein called BuD to DNA in order to redirect it towards specific DNA regions. Guillermo Montoya, the researcher who led the study, says the discovery: “will allow us to modify and edit the instructions contained in the genome to treat genetic diseases or to develop genetically-modified organisms.” The study is published in the journal Acta Crystallographica, Section D: Biological Crystallography.

The possibility of making à la carte modifications to the genome of living organisms could have a wide variety of applications, not only in the field of synthetic biology—the science that seeks to create new living beings or improve existing ones for their biotechnological use—but also for the treatment of human illnesses.

To achieve this, several researchers from around the world have focused on the proteins that bind to the DNA in very specific ways: their manipulation to direct them towards specific places in the genome, linked to their binding to genetic effectors (DNA repair or activator proteins, among others), could serve to modify DNA messages or to redesign genetic circuits as needed.

The CNIO team has deciphered the DNA binding code of BurrH, a new protein that was identified in Burkholderia rhizoxinica bacteria whose BuD domain specifically binds to the genome. To get there, the researchers have resolved the complete three-dimensional structure of the protein using the biophysical technique known as X-ray crystallography.

The main advantage of BuDs lies in their high specificity: they are able to distinguish DNA sequences that differ only in two nucleotides (the letters that make up the DNA). “This high specificity acts as a GPS that allows them to find their destinations within the intricate genome map”, says Montoya, adding that: “They are very versatile and easy to reprogramme in comparison with other proteins used to the same end.”

Montoya’s group has redesigned BuDs that are capable of recognising the areas of the genome close to mutations responsible for sickle-cell disease, a pathology caused by modifications in the beta globin gene that produce alterations in red blood cells. “The linking of DNA repair proteins to these redesigned BuDs could serve to correct genetic alterations in patients with this disease”, say the researchers.

Montoya says that several companies are already interested in this new technology: “Our tool, as well as being used to treat genetic disease, could be used to genetically modify micro-organisms targeting metabolite synthesis needed to produce biofuels, for example.” 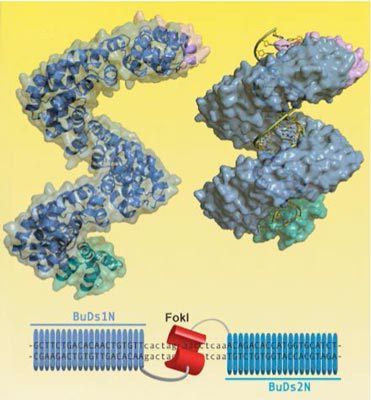 A change in the BuDs structure: before (left) and after (right) recognising a specific DNA sequence ./Guillermo Montoya. CNIO