Pheochromocytomas and paragangliomas are rare neuroendocrine tumours with a strong hereditary component. Half the genes whose alterations confer hereditary susceptibility to develop this condition code for enzymes involved in the Krebs cycle, a metabolic route involved in cellular respiration. A study by the Hereditary Endocrine Cancer Group of the Spanish National Cancer Research Centre (CNIO) published in the journal Clinical Cancer Research identifies new genes associated with this cycle that are involved in the development of these tumours.

Approximately 40% of patients diagnosed with pheochromocytomas or paragangliomas –considered to be the same condition but affecting different parts of the body– harbour a germline alteration in susceptibility genes related to these diseases. This feature earns them the dubious honour of being the tumours with the strongest hereditary component known to date.

Over the past few years the Hereditary Endocrine Cancer Group has focused its efforts on discovering new genes with a hereditary susceptibility to developing this condition employing the very latest sequencing technologies to do so. In addition to the discovery, in 2011, of germline mutations in MAX in patients with hereditary pheochromocytoma, in 2015 a new gene implicated in the Krebs cycle (MDH2) was identified as being responsible for a hereditary susceptibility to developing pheochromocytomas and paragangliomas. The mutations in MDH2, as well as in other genes implicated in the Krebs cycle (such as FH and the SDH genes) cause an accumulation of oncometabolites that inhibit the activity of various enzymes implicated in DNA demethylation, which leads to hypermethylation of certain regions of the DNA –CpG islands– and, ultimately, alterations in gene expression.

In the study published in the current issue of Clinical Cancer Research, the researchers have selected tumour samples that showed this characteristic pattern of hypermethylation but, however, did not have any of the known mutations. Thanks to massive sequencing of all of the genes implicated in the Krebs cycle and to the study of the cycle’s intermediaries and of the methylation profile of the tumours, the authors have identified several susceptibility genes associated with a risk of developing this pathology.

In the study the authors show that the presence of a germline mutation in the GOT2 gene found in a patient with 9 tumours and metastasis gives rise to increased activity of the encoder enzyme. Furthermore, the authors describe extraordinarily rare mutations in two patients: one epimutation in the SDHC gene and another in the IDH1 –the third to be identified in this gene. Finally, by way of an extension study focused on more than 60 patients with these neuroendocrine tumours, a new susceptibility gene, IDH3B, associated with the development of paragangliomas was identified.

“The identification of mutations in the Krebs cycle genes is especially important given that the patients harbouring them have a greater likelihood of developing metastasis,” explains Alberto Cascón, from the Hereditary Genetic Cancer Group and leader of the study. “The Krebs cycle could be the Achilles heel of these tumours and, therefore, a potential target for future therapies”, adds Mercedes Robledo, head of the aforementioned group and member of the team that carried out the research.

This study was financed by the Health Research Fund (Project PI15/00783) and the European Regional Development Fund (ERDF) via the Carlos III Health Institute Sub-Directorate General for Research Assessment and Promotion. 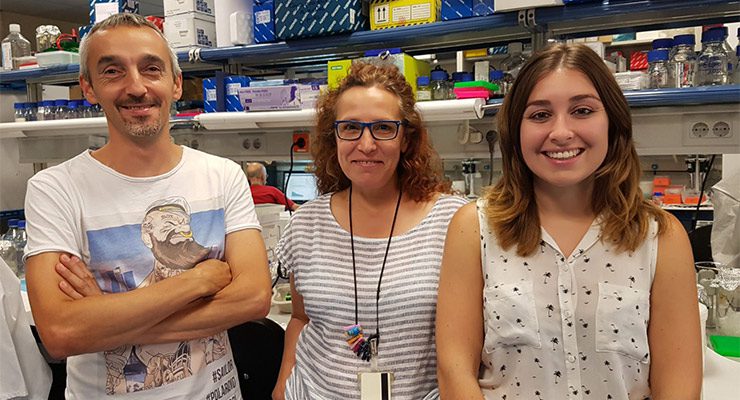 From left to right, Alberto Cascón, Mercedes Robledo and Laura Remacha, authors of the paper and members of the Hereditary Endocrine Cancer Group./ CNIO