Variants of the CYP3A4 gene are associated with the appearance of peripheral neuropathy, the most frequent and limiting toxicity for these patients, which includes tingling and pain in the extremities, cramping, muscular weakness and difficulty walking

This is the first genetic marker that predicts severe paclitaxel neurotoxicity, which would allow for the individualization of therapies for this patient group

One out of every 35 people in Spain carries these variants, a frequency higher than populations in other geographical areas

Paclitaxel is a chemotherapeutic drug that has been shown to be highly effective when treating solid tumours, such as breast, ovarian and lung tumours. However, its use frequently causes peripheral neuropathies, neurological problems that affect the vast majority of patients. Symptoms include tingling and pain in the extremities, cramping, muscular weakness and difficulty walking, in addition to others. In severe cases, the severity of these adverse effects mandates dosage reduction, and even stopping the treatment.

A patients’ risk of developing peripheral neuropathy from paclitaxel is unknown. To date, other studies had suggested the existence of genetic variants that could explain an increased susceptibility of the patients to suffer from this disorder, although there was no clinical predictive marker for them.

Now, scientists from the Spanish National Cancer Research Centre (CNIO), in collaboration with the Karolinska Institutet in Sweden, have identified the first genetic marker associated with severe neurological toxicity. The results could be very valuable in hospital clinical practice, given that they would help to evaluate treatment risks on an individual basis, thereby improving the quality of life for patients carrying these variants.

The authors of the research add that this information could be especially valuable for the Spanish population: “Even though these variants are rare or not frequent in the population, their frequency is greater in Spain than in other countries.” One out of every 35 people in Spain carries one of these genetic variants in their genome.

The study, led by Cristina Rodríguez-Antona, researcher from the CNIO Hereditary Endocrine Cancer Group, led by Mercedes Robledo, is published by the journal Clinical Cancer Research.

Researchers initially sequenced the complete exome—the part of the genome that translates into proteins—for 8 Spanish patients with breast cancer who had developed extreme neuropathies after being treated with paclitaxel.

In this first phase of the research, they discovered genetic variants that were associated with a loss of hepatic CYP3A4 enzyme function, an enzyme that is in charge of eliminating the drug from the body.

“Given these results, we genetically analysed an independent population of 228 Spanish patients treated with the same drug, in search of these variants. The study confirmed their presence in the patients that experienced the greatest toxicity,” says Rodríguez-Antona.

The CYP3A4 enzyme is involved in metabolising more than 50% of the drugs currently used in the clinic. The researcher explains that, “for this reason, identifying patients carrying these variants that decrease its activity is crucial to optimise treatments; especially those using drugs with very small differences between the therapeutic and toxic doses, such as with those used in oncology.”

We still do not know all the causes for the development of peripheral neuropathies during treatment with paclitaxel, but the results from this study indicate the importance of performing screenings to detect loss of function CYP3A4 variants in patients treated with this drug.

“Our research shows that the recently developed whole-exome sequencing technologies may be useful for identifying genetic markers that predict drug-related adverse effects.”

The study has been funded by the Ministry of Economy and Competitiviness, The Swedish Cancer Foundation, The Swedish Research Council and the Karolinska Institutet in Sweden. 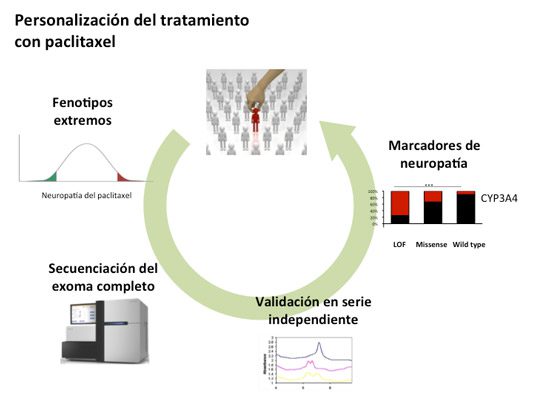 Scheme illustrating the study that has identified variants in the CYP3A4 gene associated with paclitaxel severe neuropathy. /CNIO