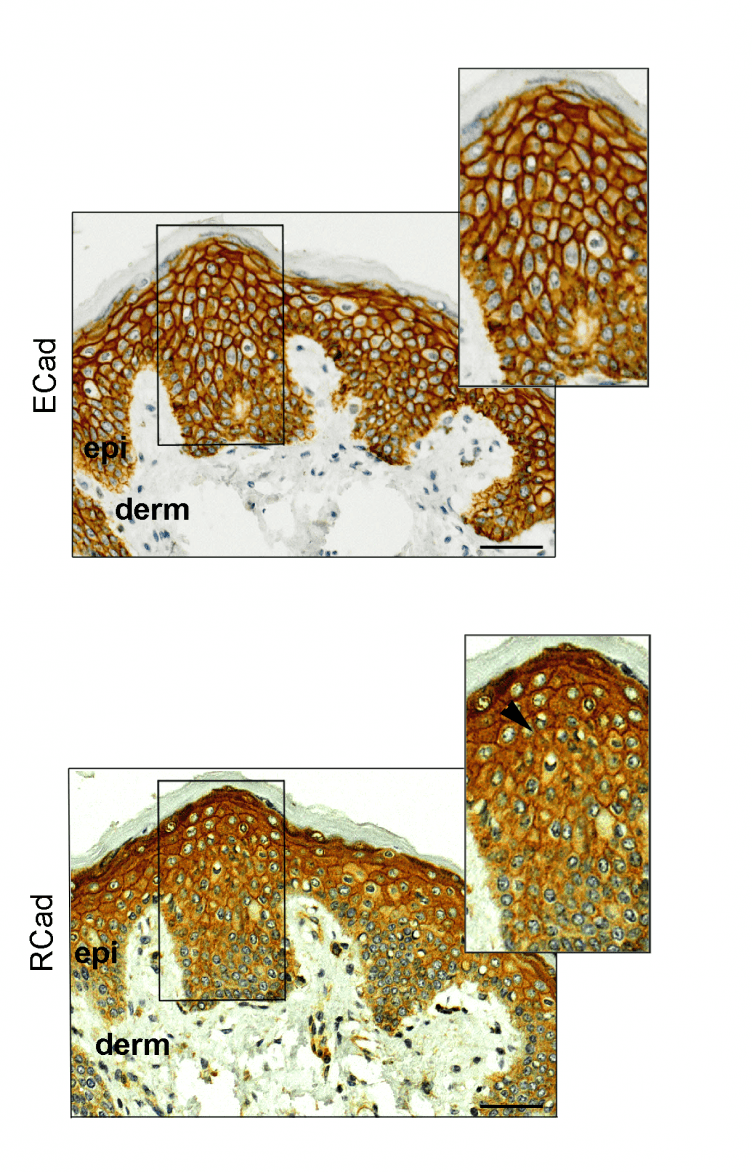 Immunohistochemical analysis of E-cadherin (ECad) and R-cadherin (RCad) in normal skin samples from breast cancer patients before starting capecitabine treatment. Unlike ECad (top), RCad (bottom) expression is mostly observed in the suprabasal epidermal layers, which are affected in the hand-foot syndrome. /CNIO

The researchers studied more than 600,000 genetic variants in the genome of 166 patients treated with the chemotherapy drug capecitabine

Before undergoing treatment, the patients carrying the risk alleles for the hand-foot syndrome had low levels of two proteins that are key to the effective functioning of the skin barrier

The finding may help classify patients according to their genetic risk for developing this side effect of some cancer treatments. Preventive measures, like dose reduction or treatments with alternative drugs, could be applied to them

The study is being published in 'Clinical Pharmacology & Therapeutics'

Capecitabine is a chemotherapy drug used for breast and colorectal Cancer cancer. It can extend survival rate by nearly 10%. However, recent studies revealed that almost 50% of patients develop palmar-plantar erythrodysesthesia, a skin reaction also called hand-foot syndrome with mild to serious symptoms. Up to 17% of these patients can have a burning pain in their hands or feet that can prevent them from doing their usual activities. This adverse reaction is the main cause of dose reductions or therapy delays, with dangerous consequences for cancer patients.

There is, therefore, a pressing need to find predictive markers to identify those patients that are more likely to have this toxic reaction before the treatment starts. Patients might be classified according to their genetic risk and get personalised treatment accordingly.

Recently, a team of researchers led by Anna González-Neira, Head of the Human Genotyping-CEGEN Unit at the Spanish National Cancer Research Centre (CNIO), identified genetic markers associated with a higher risk to develop capecitabine-induced hand-foot syndrome. The study is being published in Clinical Pharmacology & Therapeutics.

“Our study identified regulatory variants that affect the levels of CDH4 mRNA and the protein it encode (R-cadherin), which is key to maintaining the normal structure of the skin,” explains Anna González Neira, corresponding author of the study. “The association of the genetic variants with the risk of developing the above-mentioned skin condition was replicated in a independent cohort of 85 new patients and validated in several functional studies,” she adds.

The CDH4 gene encodes R-cadherin, a protein in the epidermis that plays a relevant role in maintaining the good condition of the skin. The CNIO researchers found that patients who developed hand-foot syndrome during chemotherapy with capecitabine carried these regulatory variants that resulted in the reduced expression of CDH4, as compared to other patients.

“In addition, in human cell cultures, CDH4 down-regulation resulted in the reduced expression of involucrin, another skin protein that is essential for the skin barrier function,” González-Neira remarks.

In their observation of the normal skin of cancer patients before starting the treatment, the scientists at CNIO found that the patients with the alleles associated with a risk to develop the hand-foot syndrome had low levels of R-cadherin and involucrin before chemotherapy with capecitabine. The study results indicate that low levels of these two proteins could contribute to increase the cytotoxic effects of the drug. “This effect can be extremely severe in the palms of the hands and the soles of the feet for a number of reasons: epidermal cells divide at a high rate, there is a pressure and temperature effect on the palms and soles, and the numerous sweat glands on these parts of the body have a high drug concentration.”

To conclude, the authors of the study detected genetic markers that, together with the levels of R-cadherin and involucrin, could be useful biomarkers to identify patients with a higher risk to develop hand-foot syndrome. “Oncologists could then decide to take preventive measures for these patients, like dose reduction or treatments with alternative drugs.”

The research was funded by the Ministry of Science and Innovation, the Carlos III Health Institute, the Spanish Association Against Cancer (AECC), “la Caixa” Foundation, and the European Regional Development Fund.