Survival of mice after a heart attack improved by 17 % when they were treated with telomerase, compared to control mice

This is a strategy that has never been used before to treat cardiovascular illness, especially to prevent heart failure following myocardial infarction

Telomerase has already been used in therapies to delay ageing. This is the first time it has been used against a specific, age-related illness

The enzyme telomerase repairs cell damage produced by ageing, and has been used successfully in therapies to lengthen the life of mice. Now it has been observed that it could also be used to cure illnesses related to the ageing process. Researchers at the Spanish National Cancer Research Centre (CNIO) have for the first time treated myocardial infarction with telomerase by designing a very innovative strategy: a gene therapy that reactivates the telomerase gene only in the heart of adult mice, thus increasing survival rates in those animals by 17 % following a heart attack.

Christian Bär and Bruno Bernardes de Jesús, researchers in Maria Blasco’s Group at CNIO, have worked alongside several Units from the CNIO Biotechnology Programme and the teams of Fátima Bosch (the Autonomous University of Barcelona) and Kai Wollert (Hannover Faculty of Medicine, Germany). “Our work suggests that the activation of telomerase could be a therapeutic strategy to prevent heart failure following myocardial infarction,” say the authors of the study published today in Nature Communications.

“We have discovered that following a myocardial infarction, hearts that express telomerase show less heart dilatation, better ventricular function and smaller scars from the heart attack; these cardiac events are associated with an increased survival of 17 % compared to control animals,” they say.

Furthermore, everything points to cardiomyocytes—the cells responsible for heart beating—being regenerated in those hearts with telomerase, a long searched-for goal in post-heart-attack therapy. The regeneration of heart muscle would counter the formation of scars as a consequence of the heart attack, a tough tissue that hinders cardiac function and increases the likelihood of heart failure.

“One of the aims of cardiology when treating myocardial infarction and preventing heart failure is efficient cardiac regeneration, but up until now there have not been any significant advances in this sense,” explain the authors.

They remind us that heart failure is the most common cause of death and illness in the world, and that one of its main risk factors—of cardiovascular disease generally—is ageing: the process not only causes changes to the heart that make it more likely to fail, but it also reduces its capacity to regenerate itself.

The study published today is part of another in which the same CNIO Group developed a genetic technique, in 2012, to reintroduce the telomerase gene in an adult organism. It was then shown that thanks to their renewed capacity to synthesise telomerase, mice lived 40 % longer. Now the authors explore the hypothesis that, if telomerase delays ageing, it may also combat diseases related to ageing, like heart attacks.

Telomerase is able to reset a cell’s biological clock by rebuilding telomeres, the protein hoods that protect the ends of chromosomes. Telomeres progressively shorten every time the cell divides, until they reach a critical length, at which point they cannot carry out their protective function. Then the cell stops dividing and ages. At the whole-body level, telomere shortening leads to ageing-related diseases, including cardiac dysfunction in both mice and human beings.

Telomerase prevents this shortening of the telomeres, but in the vast majority of cells in the body it only does so before birth; adult cells, exceptions aside, do not contain telomerase.

The authors of the study inoculated adult mice with a modified virus that contained telomerase gene between viral genes, so that adult cells could express telomerase once again. In their seminal work in 2012, the reintroduced telomerase gene was perfectly expressed throughout the body. But this time, researchers have infected only the heart and, when they have been sure that the animals were expressing telomerase in the organ, they have induced a heart attack.

“These results show that the activation of telomerase in the adult heart is beneficial for survival in model mice that have suffered acute myocardial infarction, an effect that coincides with cardiac myocardial cells having longer telomeres and the activation of several pathways associated with cardiac protection and regeneration,” conclude the authors. This study provides “proof-of-concept for the development of innovative strategies based on the activation of telomerase to treat chronic and acute heart failure,” and it opens new avenues for the treatment of other age-related diseases.

The authors of the study—with the help of cardiologist Francisco Fernández-Avilés, Head of Cardiology at the Gregorio Marañón General Hospital—hope to soon be able to test this gene therapy in pigs as a prior step to human trials. Fernández-Avilés said: “this study is impressive due to its ingenuity and methodology, and totally disruptive from the clinical point of view, given that it opens doors we’ve never explored before to treat heart disease. It is crucial for two reasons: it demonstrates that natural mechanisms for preserving genetic information are involved in myocardial protection and regeneration; and it teaches us that those mechanisms can be reactivated using therapeutic approaches applicable to patients.”

The research has been funded by the Botín Foundation, Roche, the European Commission (ERC), and the Ministry of Economy and Competitiveness. 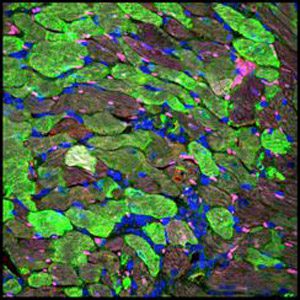