Genome Biology. From happiness on Twitter to DNA organisation

Assortativity, a property used in network analysis, helps to identify the proteins that ensure the correct folding of DNA inside the nucleus

The new perspective allows the integration of different kinds of Big Data, unravelling the 3D configuration of the genome 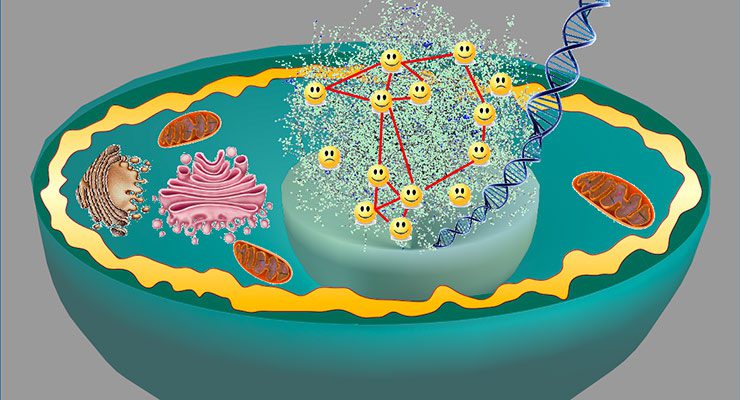 Twitter users who are happy tend to be more connected with other happy users. This is the confirmation of a property of social networks known as assortativity: a measure of to what extent people who tend to connect with each other share certain characteristics. A study conceived by Vera Pancaldi and Daniel Rico from the Structural Biology and Biocomputing Programme at the Spanish National Cancer Research Centre (CNIO), led by Alfonso Valencia, has redefined this measure in order to better understand the 3D organisation of DNA inside the cell nucleus.

After 200 years of research on the cell nucleus, we still do not know precisely how DNA is packed inside it. “Discovering how DNA is organised is still one of the biggest challenges in our field. It is like trying to understand how you can orderly arrange a surface with the extension of a football pitch inside a grain of rice. Moreover, the chromatin structure could contain as much information as the DNA sequence, which we already know” explains Vera Pancaldi.

Unravelling the laws that shape chromatin, the conformation of DNA inside chromosomes, and its relationship with gene expression regulation (the way genes are turned ‘ON’ or ‘OFF’) is a complex task. This is in part due to the vast quantity of different types of data that must be analysed and interpreted.

In recent years, the accumulation of a huge amount of biological data, together with Big Data techniques, has allowed researchers in Alfonso Valencia’s group to study DNA interactions in depth. These interactions shape DNA structure and gene regulation in healthy and diseased cells.

In some sense, chromatin can also be seen as a network. There are different regions in the genome with different functions (genes being transcribed, promoters, enhancers and other elements) “which interact in specific ways and are regulated by different proteins”, as explained by Daniel Rico. Together with his colleagues they had previously made a collection of tens of these proteins that bind DNA in mouse embryonic stem cells. They subsequently decided to use assortativity to analyse whether these proteins were mediating different types of interactions.

“We borrowed the concept of assortativity making an analogy between social networks and chromatin contact networks, introducing the concept of chromatin assortativity”, explain the authors in their Genome Biology paper. “This global property measures to what extent a specific property of a chromatin region is shared by other regions that preferentially interact with it”.

According to this study, tools used in the analysis of interpersonal relations in social networks could help us better understand genome organisation. The paper suggests that different genomic regions with “similar functions” could be connected preferentially, just like people that are alike tend to connect preferentially in social networks. Using assortativity helps in the analysis of DNA’s configuration by identifying the proteins that mediate the interactions.

Rico and his colleagues focused on two chromatin subnetworks: the one uniting genes with each other, and the one connecting a gene with regulatory regions. Using chromatin assortativity, they were able to assign different proteins to each type of interaction.

The application of a network science tool to the study of the 3D configuration of DNA ‘’helps us identify global chromatin properties faster and more directly than other approaches”, highlights Pancaldi. “It allows us to look for general principles in genome organisation in order to better understand the impact of changes related to embryonic development and tumours”.

The work was carried out in collaboration with the groups of Mikhail Spivakov and Peter Fraser at the Babraham Institute in Cambridge (UK) and was funded by the EU through the BLUEPRINT project, a member of the International Human Epigenome Consortium (IHEC).