European Urology. First blood-based biomarker in response to the treatment of the most aggressive prostate cancer.
In collaboration with British and Italian researchers 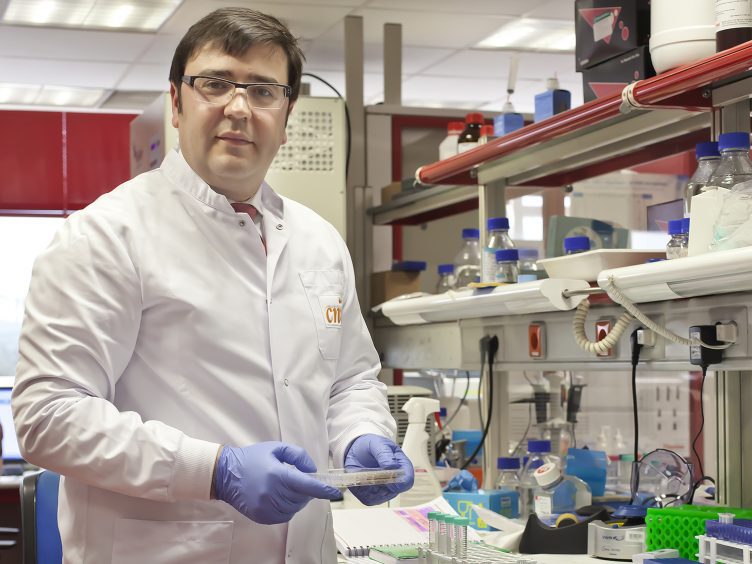 In castration-resistant prostate cancer, the tumours continue to progress even though testosterone production has been blocked; more than 90% of these patients develop metastasis and the survival rate is 1 to 2 years

Using liquid biopsy, a simple blood test has been successful in determining what type of treatment can help to prolong the life expectancy of more than 150 patients

The most aggressive type of prostate cancer, castration-resistant prostate cancer, can be treated with two different therapies: taxanes or hormone treatment. Until this day there are no comparative studies between the two and the decision on which treatment to use is done empirically and based on the patient’s preferences. Now, a study co-led by the Spanish National Cancer Research Center (CNIO) and researchers from Italy and the United Kingdom, and published in European Urology, has defined a biomarker that, using liquid biopsy, can determine which of the two treatments can extend the life expectancy in each patient.

The study, which once again shows the importance of basic research to generate knowledge that can be translated into better clinical care for the patients, was led by David Olmos, Head of the CNIO Prostate Cancer Clinical Research Unit, Ugo de Giorgi, from the Istituto Scientifico Romagnolo per lo Studio e la Cura dei Tumori (IRST), IRCCS de Meldola (Italy), and Gerhardt Attard, from the Centre for Evolution and Cancer at the Institute of Cancer Research (ICR) in the United Kingdom.

Prostate cancer is one of the most common cancers in males and has one of the highest 5-year survival rate when diagnosed in the localised stage. When diagnosed in the advanced stage or when a localised tumour relapses after the initial local treatment, the usual procedure is to fight it using male hormone (androgen) deprivation therapy. It can be done either by surgical removal of the testicles or using medication that eliminates the testosterone production (chemical castration). However, many of the patients, up to 90%, after the initial castration develop more aggressive, castration-resistant forms and their survival rate is around 2 years.

Among the treatments used to extend the life expectancy in patients with castration-resistant prostate cancer, the taxanes – docetaxel and cabazitaxel – work by blocking cell division and cell proliferation. The new generation hormone therapy – abiraterone and enzalutamide -, on the contrary, act on androgen (male hormone) production: abiraterone inhibits its synthesis, while enzalutamide blocks the nuclear testosterone receptor; this therapy interferes with the production of the fuel that the tumour needs to grow.

“At this moment there are no comparative studies between hormones and taxanes”, explains David Olmos. “There are only studies in similar populations and the selection of the adequate treatment is done empirically. The treatment usually starts off with a hormone therapy, but it also depends on the patient’s preference, after duly informing the patient of his options”.

The study results now published in the journal European Urology have determined that castration-resistant prostate cancer patients having a normal number of copies of the gene encoding the androgen receptor (AR) – the one regulating cellular signals mediated by male sex hormones – in the circulating tumour DNA (the DNA that the tumour releases in the blood), seem to have a lower risk of disease progression and a higher life expectancy when they are treated with abiraterone/enzalutamide, with a 50% higher survival rate compared to docetaxel, where the average life expectancy was around 24 months”, continues Olmos. On the other hand, the patients with more copies of the androgen receptor gene respond slightly better to docetaxel, with a higher life expectancy, around 9 months, compared to abiraterone/enzalutamide.

This research led by three internationally renowned investigators – Olmos, Attard and de Giorgi – with the participation of researchers from Spain, Italy and the United Kingdom, is an example of the successful collaboration that takes place between clinical and translational research within European academia, and where the main objective is the patient’s benefit. The CNIO Prostate Cancer Team has led the study in Spain, and it has coordinated the 13 Spanish centers from which 112 patients of the 239 analysed come from.

The CNIO Prostate Cancer Clinical Research Unit has a broad network of clinical collaborators integrated in the PROCURE platform. It is a platform that is the result of the collaboration and hard work of numerous Spanish researchers, and that has given one of the largest prospective multicentric collections of biological samples from patients with advanced prostate cancer associated with the most important prospective clinical data in the European academic field.

The presence of AR in circulating tumour DNA has become the first biomarker that will help define the first-line therapy for these patients and it also has an impact on the synergies between basic research and clinical care to improve their quality of life. The study also indicates the urgency to develop new treatments for the patients with a higher level of AR, as they respond worse to the existing therapies.

The liquid biopsy has proven to be a reliable, fast and non-invasive method to determine the alterations of a specific tumour and to be able to decide the best treatment in each case. With a simple blood test we can avoid tissue invasion that is present in the traditional biopsy and it is much more reliable.

Olmos explains: “using bioinformatics tools we can calculate the fraction of the tumour DNA present in the total free DNA in the plasma and in that fraction, we calculate the number of AR copies”. For this study, the liquid biopsy has been used to “confirm that a marker that has a prognostic value can also have a predictive use. The next step will be to make a random study that can confirm the results”.

The study has been funded by the European Society of Medical Oncology (ESMO), the Medical Research Council, Cancer Research UK, the Institute of Health Carlos III, the Prostate Cancer Foundation, and the Spanish Ministries of Science, Innovation and Universities, and of Education, Culture and Sports.