Cell Reports. Evidence of the importance of telomeres in plant stem cells.
The study is published today in the journal 'Cell Reports'

The study employs an innovative technique that uses probes to visualise plant telomeres at the cellular level. This work was carried out by researchers from the Spanish National Research Council (CSIC) working at the Centre for Research in Agricultural Genomics (CRAG), with the participation of the Spanish National Cancer Research Centre (CNIO), La Salle, the University of Barcelona (UB) and ATM in Texas (USA)

The results, published in Cell Reports, highlight the universal nature of the role played by telomeres in the ageing process of living beings, including plants and animals

The role played by telomeres in mammalian cells has been known for several years. It is also known that these non-coding DNA sequences, which are found at the ends of the chromosomes, protect them and are necessary to ensure correct cell division. What is more, the “youngest” cells have longer telomeres, and as these cells divide, the telomeres get shorter until they no longer permit new cell divisions. This telomere shortening process has also been associated with cancer, which emphasises the important implications of these structures, not only in the ageing process, but also in the oncology field or other age-associated illnesses.

However, to date, little is known about the role played by telomeres in essential plant physiology processes such as growth. The reason is simple: the technologies that are necessary to be able to detect and measure the telomeres at the cellular level in these organisms had not been developed until now.

Now, a study led by CSIC researcher Ana Caño-Delgado, carried out at the CRAG, describes the development of an innovative technology that enables the monitoring of telomeres at the cellular level in plants. The technique allows to demonstrate, for the first time, the role played by these structures in plant development and longevity of plants.

The study, published in Cell Reports, is the result of a five-year interdisciplinary effort that has brought together CRAG plant experts and international leaders in the field of mammalian telomeres, such as the Telomeres and Telomerase Group led by María Blasco at the CNIO. Computational engineers from La Salle (Universitat Ramon Llull) and physicists from the Universidad de Barcelona (UB) and the University of Texas (ATM, USA) have also participated in this study.

Unlike animals, plants can grow throughout their entire lives. This is possible thanks to the meristems, namely, the tissues of undifferentiated cells found at the ends of stalks and in the stem cell niche located at the root apex. It is these two organs that provide the plant with new cells and enable it to grow throughout its entire life.

According to the researchers participating in the study, the cells with longer telomeres are precisely those of the stem cells and of the meristems. It is also in these areas where the telomerase enzyme (which enables the lengthening of the telomeres) is active, while there is no activity of this type in differentiated tissues such as leaves or branches.

“We see that telomeres and telomerase are essential for the renewal of the stem cells in the meristems and for the growth of the plant”, explains Ana Caño, who goes on to add that: “those plants without active telomerase and in which the telomeres are abnormally shortened rapidly exhaust all of their stem cell resources and stop growing”. The results show a vital relationship between the length of the telomeres, the stem cells and the longevity of these organisms.

María Blasco indicates: “the fact that telomeres can now be measured at cell level in plants is extremely important as it shows the universal nature of both the technology and of what it is that the telomeres do. It also presents the possibility of using plants to look for compounds capable of regulating the telomeres in animal cells that could be useful in the treatment of illnesses associated with ageing, including cancer”.

The research project, which was carried out using the root of Arabidopsois thaliana, a laboratory model plant, included the use of an innovative technology for displaying the telomeres present in individual cells. This is an adaptation of telomapping, a technique developed by María Blasco’s team at the CNIO for studying telomeres in mammalian cells.

The La Salle engineers and the UB physicists collaborated at a computational level in the development of algorithms for the analysis of images of intact plants in which the telomeres within the nucleus of the cells are observed.

The study has been funded by the Spanish Ministry of Economy and Competitiveness, the Human Frontiers Science Program Organization, the European Union and the Botín Foundation. 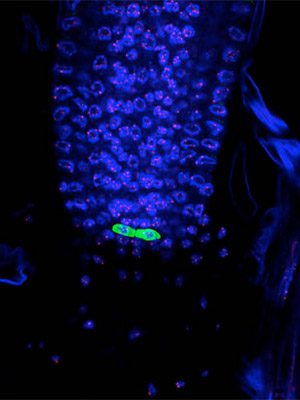 Root of the plant Arabidopsois thaliana with the telomeres highlighted in pink and the stem cell niche in green.