PNAS. CNIO researchers develop an effective strategy to induce regression in lung tumours caused by the KRAS oncogene in mice 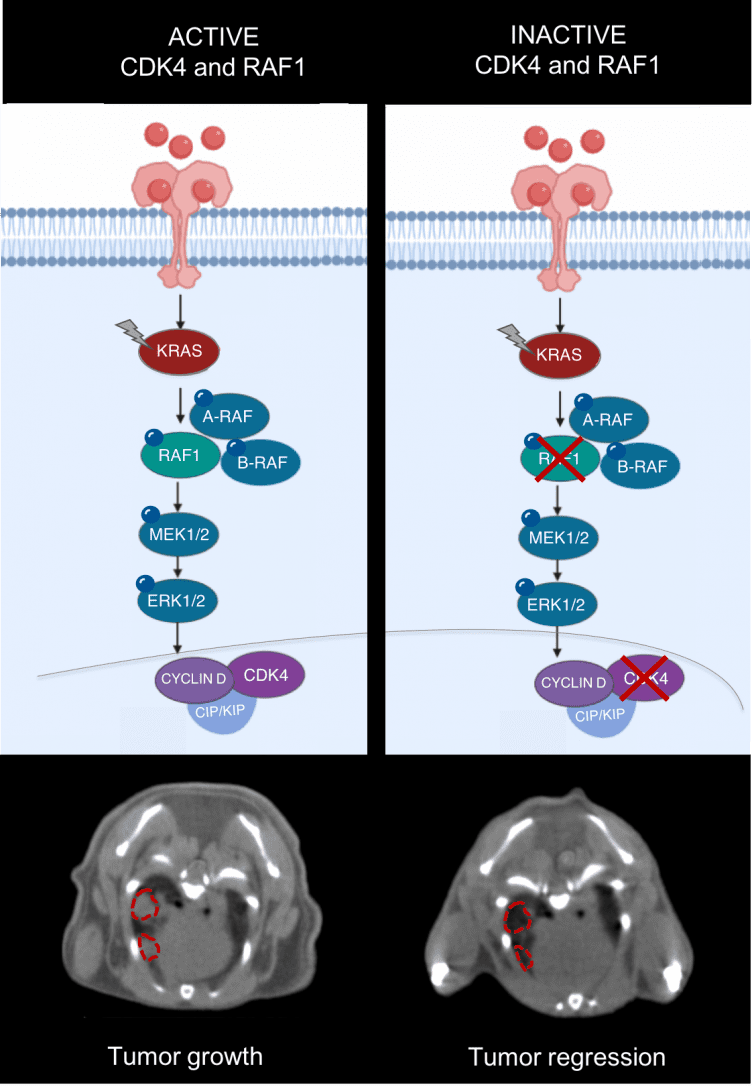 Researchers from the Experimental Oncology Group at the CNIO have achieved complete remission of 25% of lung tumours caused by the KRAS oncogene in mice by inactivating CDK4 and RAF1, two genes that act at different levels in the signalling pathway of this oncogene. In addition, this therapeutic combination slows tumour growth in 100% of the cases

Furthermore, in spite of the high heterogeneity of these tumours, the team has managed to identify and therapeutically treat the different resistance mechanisms that can develop after inactivating both targets

These findings pave the way for new therapeutic strategies against lung tumours caused by the KRAS oncogene, including potentially resistant tumours

There are effective drugs currently available to tackle CDK4 such as abemaciclib or palbociclib. However, the application of this therapeutic strategy must wait for the development of new RAF1 inhibitors since those that have been generated so far have proved to be too toxic on account of their lack of specificity

The KRAS oncogene is involved in at least one fifth of all human cancers: KRAS mutations are directly responsible for 32% of lung tumours and 96% of pancreatic tumours. However, after more than thirty years of research to date, there are still no effective therapeutic strategies against this oncogene. For this reason, much of the research conducted seeks to identify other molecules that display therapeutic activity along the KRAS signalling pathway. Rising to this challenge, researchers from the Experimental Oncology Group of the Spanish National Cancer Research Centre (CNIO) have achieved complete remission in 25% of lung tumours induced by this oncogene in mice following genetic inactivation of CDK4 and RAF1, which opens new venues for the development of future treatments. This finding has been published by PNAS, the journal of the American Academy of Sciences.

In this project, the CNIO team explored an approach that consists of inactivating two genes that are part of the KRAS signalling pathway: CDK4 and RAF1. “And this strategy has worked,” says Monica Musteanu, one of the leading authors of the study. By working with mouse models for lung cancer caused by a combination of two mutations – activation of the KRAS oncogene and elimination of the tumour suppressor gene p53, two of the most frequently mutated genes in human cancer – they have managed to shrink 100% of the tumours, and a quarter of them have remitted completely. In addition, the researchers have confirmed in healthy mice that this therapeutic strategy does not compromise normal functioning of the body.

Even so, as is often found in clinical practice, a percentage of the tumours were able to survive in the absence of CDK4 and RAF1. However, the researchers were able to identify the molecular mechanisms that triggered this resistance and prevented total tumour remission: activation of the PI3K pathway, essential in cancer, and the silencing of several tumour suppressor genes by means of methylation. “Both mechanisms can be therapeutically neutralised: using PI3K inhibitors, on the one hand, and on the other, through the selective demethylation of tumour suppressor genes to reactivate their function”, explains Laura de Esteban, the lead author of the research published by PNAS.

To carry out this study, the CNIO team used a mouse model that accurately reproduces the human disease, inducing aggressive lung tumours by activating the KRAS oncogene and deactivating the p53 tumour suppressor, a genetic combination responsible for a high percentage of human lung adenocarcinomas. Then, once the tumour has formed, genes are inactivated in the mouse systemically in the same way that a patient would receive treatment after diagnosis.

The findings shed light on the development of new treatments for tumours with KRAS mutations and indicate the importance of developing inhibitors specifically against RAF1, because the inhibitors developed so far have not made it past phase I on account of their high toxicity.

In addition, the authors also point out that another area of research to be pursued in the future would be the study of multiple resistance pathways that may arise following inactivation of therapeutic targets.

The CNIO Experimental Oncology Group is a global reference in the study of KRAS-related cancers, with notable examples such as the elimination of lung tumours and advanced pancreatic tumours by inactivating the RAF1 kinase in animal models.

The research was funded by the Spanish Ministry of Science and Innovation, the Institute of Health Carlos III, the European Research Council (ERC), the Autonomous Community of Madrid, the National Natural Science Foundation of China, the AXA Foundation, and the Ministry of Education.