Nature Aging. CNIO researchers open the door to treatment of renal fibrosis by showing that it is caused by telomere shortening 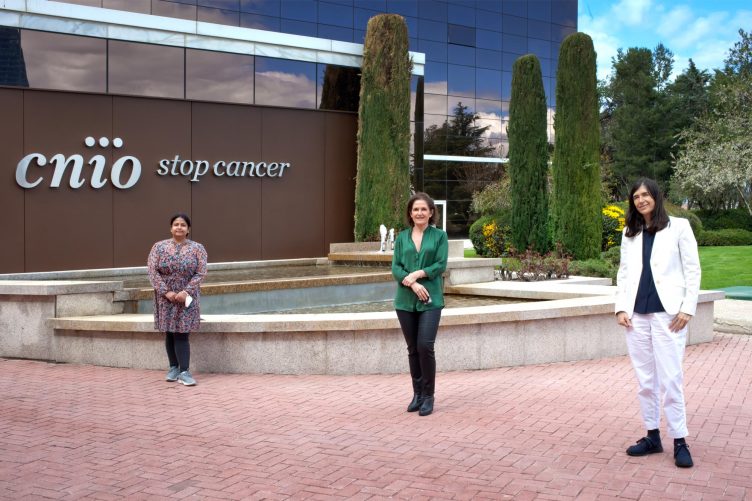 From left to right, Sarita Saraswati, Paula Martínez and Maria A. Blasco. /CNIO

Renal fibrosis leads to kidney failure, a disease that can only be treated by dialysis and whose incidence is increasing due to the ageing of the population

The Telomeres and Telomerase Group at CNIO seeks to treat renal fibrosis by acting on one of the causes of ageing, telomere shortening

Their results are published in ‘Nature Aging’

Ageing is a common factor in many diseases. So, what if it were possible to treat them by acting on the causes of ageing or, more specifically, by acting on the shortening of telomeres, the structures that protect chromosomes? This strategy is being pursued by the Telomeres and Telomerase Group of the Spanish National Cancer Research Centre (CNIO), which has already succeeded to cure pulmonary fibrosis and infarctions in mice by lengthening telomeres. Now they take a first step towards doing the same with renal fibrosis by demonstrating that short telomeres are at the origin of this disease, which is also associated with ageing.

The new study will be published this week in the journal Nature Aging.

Renal fibrosis is the most common cause of kidney failure, a disease that can currently only be treated by dialysis. It is characterised by excessive scarring of the tissue, which hardens and loses its functionality.

“These results show the important role short telomeres play in its development, and this finding undoubtedly opens new doors for the treatment of renal fibrosis,” says the first author of the study, Sarita Saraswati, a researcher with the Telomeres and Telomerase Group at CNIO.

The authors, headed by Maria A. Blasco, also offer a possible link between short telomeres and kidney fibrosis: a phenomenon called epithelial-to-mesenchymal transition (EMT), a basic process that is crucial to the functioning of the body and is involved in regeneration and repair. Short telomeres exacerbate EMT in the kidneys and thus promote pathological scarring of kidney tissue, i.e. fibrosis.

“This is new – it is the first time that short telomeres have been linked to epithelial-to-mesenchymal transition,” says Blasco. “Furthermore, it is an important connection because this process, and the genes that regulate it, is also involved in cancer.”

Although new, the finding was expected. It was known that overexpression of genes involved in the epithelial-to-mesenchymal transition could lead to renal fibrosis; on the other hand, it had also been described that patients with renal fibrosis have shorter telomeres. “So we specifically looked for alterations in the expression of genes involved in the epithelial-to-mesenchymal transition in our mice with short telomeres and renal fibrosis, to see if short telomeres could be the trigger for the changes in expression of these genes,” explains Blasco. “And this was indeed the case.”

It affects more than 10% of people aged over 65

It is estimated that 11% of people over the age of 65 have moderate chronic renal failure, a potentially lethal condition whose incidence is increasing due to the ageing of the population. Kidney fibrosis is one of the predictors of the severity of renal failure.

Blasco’s group at CNIO has already shown that short telomeres are at the origin of other age-related diseases, such as pulmonary fibrosis. To investigate whether the same occurs with renal fibrosis, they worked with an animal model that reproduces what, according to their hypothesis, happens in older people with pulmonary fibrosis: a mouse with short telomeres that is also exposed to low doses of a kidney toxin that mimics the exposure of people to environmental damages throughout their lives.

Telomeres are proteins that protect the ends of chromosomes when a cell divides, something that happens many times during life to -among other things- regenerate tissues. With each cell division, the telomeres become shorter until they are so short that they can no longer protect the chromosomes. Cells that are damaged this way stop dividing, and the tissue ages.

In this study, the researchers observed that telomere shortening alone is not enough to cause renal fibrosis, which is to be expected because the disease does not affect 100% of elderly persons. However, if mice with short telomeres were exposed to low doses of a kidney toxin, they did develop kidney fibrosis. “The mice reproduced all the symptoms of the human disease,” explains Blasco.

The toxin administered -folic acid- “is not sufficient to induce fibrosis in healthy mice, but it acts synergistically with short telomeres,” the paper explains.

To determine whether telomeres do indeed play a causal role in the disease, the researchers created a mouse model that lacked Trf1, a protein that is essential for telomere function. These mice with dysfunctional telomeres also developed kidney fibrosis, “highlighting the importance of proper telomere function in the protection from renal fibrosis,” the authors write.

As a final demonstration of the importance of telomeres in kidney fibrosis, the authors cultured kidney cells in which they expressed the gene for the telomerase enzyme, which elongates telomeres. In these cells with restored telomeres, the epithelial-to-mesenchymal transition programme returned to normal, and the cells regained their healthy, pre-fibrosis appearance.

“As short telomeres accumulate with ageing in the organism, it is tempting to speculate that pathological EMT programmes associated with ageing, such as cancer and different types of tissue fibrosis, may be originated at least in part by the presence of short telomeres,” the authors conclude.

According to Saraswati, “considering the significant involvement of fibrosis in cancer, it is important to describe the origin of renal fibrosis and correlate it with the presence of short telomeres.”

The study was funded by the Spanish Ministry of Science and Innovation, the National Institute of Health Carlos III, the Spanish State Research Agency, the European Research Council, the European Regional Development Fund, the Community of Madrid, the Botín Foundation and Banco Santander through Santander Universities, and World Cancer Research.