Researchers froze some 200 biological structures to illustrate the chemical process that leads to DNA double-strand breaks, which lasts a matter of microseconds

DNA breaks naturally occur in numerous processes such as in DNA damage repair, mutagenesis, or the synthesis of new DNA molecules

Scientists from the Spanish National Cancer Research Centre (CNIO), led by Guillermo Montoya, have developed a method for producing biological crystals that has allowed scientists to observe —for the first time— DNA double chain breaks. They have also created a computer simulation that makes this process, which lasts in the order of millionths of a second, visible to the human eye. The study is published today by the journal Nature Structural & Molecular Biology.

“We knew that enzymes, or proteins, endonucleases, are responsible for these double strand breaks, but we didn’t know exactly how it worked until now,” said Montoya. “In our study, we describe in detail the dynamics of this basic biological reaction mediated by the enzyme I- Dmol. Our observations can be extrapolated to many other families of endonucleases that behave identically.”

DNA breaks occur in several natural processes that are vital for life: mutagenesis, synthesis, recombination and repair. In the molecular biology field, they can also be generated synthetically. Once the exact mechanism that produces these breaks has been uncovered, this knowledge can be used in multiple biotechnological applications: from the correction of mutations to treat rare and genetic diseases, to the development of genetically modified organisms.

Enzymes are highly specialised dynamic systems. Their nicking function could be compared, said Montoya, to a specially designed fabric-cutting machine that “it would only make a cut when a piece of clothing with a specific combination of colours passed under the blade.”

In this case, researchers concentrated on observing the conformational changes that occurred in the I-Dmol active site; the area that contains the amino acids that act as a blade and produces DNA breaks.

By altering the temperature and pH balance, the CNIO team has managed to delay a chemical reaction that typically occurs in microseconds by up to ten days. Under those conditions, they have created a slow-motion film of the whole process.

“By introducing metals we were able to trigger the enzyme reaction and subsequently to produce biological crystals and freeze them at -200ºC”, said Montoya. “In that way, we were able to collect up to 185 crystal structures that represent all of the conformational changes taking place at each step of the reaction.”

Finally, using computational analysis, the researchers illustrated the seven intermediate stages of the DNA chain separation process. “It is very exciting, because the elucidation of this mechanism will give us the information we need to redesign these enzymes and provide precise molecular scissors, which are essential tools for modifying the genome,” he concluded.

The study was carried out in collaboration with Modesto Orozco’s computational group at IRB Barcelona, and has been funded by the Ministry of Economy & Competitiveness and the Ramón Areces Foundation. 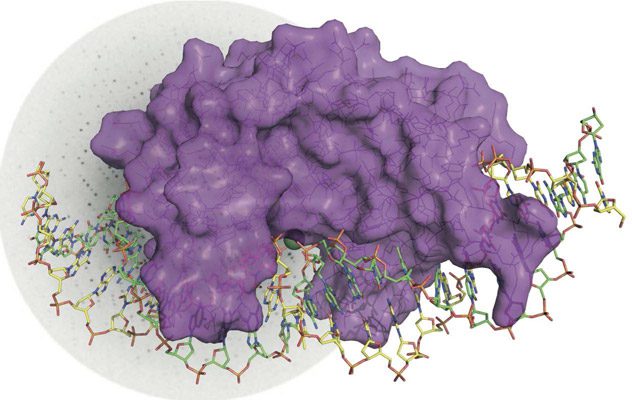 The enzyme I-DmoI (purple) is specifically associated to the double strand of DNA (yellow and green). /CNIO

Explanation: The video illustrates how the I-DmoI endonuclease nicks the phosphodiester bonds that maintain the structural backbone of the DNA. Based on the initial state (State 1), we can observe: two consecutive metals enter the Active Site (State 2), and a third metal, arrives to the middle position (State 3). The third metal plays an important role in the breakage of the phosphodiester bonds (States 4 and 5). Finally, following the DNA double chain break, the innermost metal leaves the central position (State 6).