Nature Communications. Discovery of a new tumour suppressor previously thought to be an oncogene 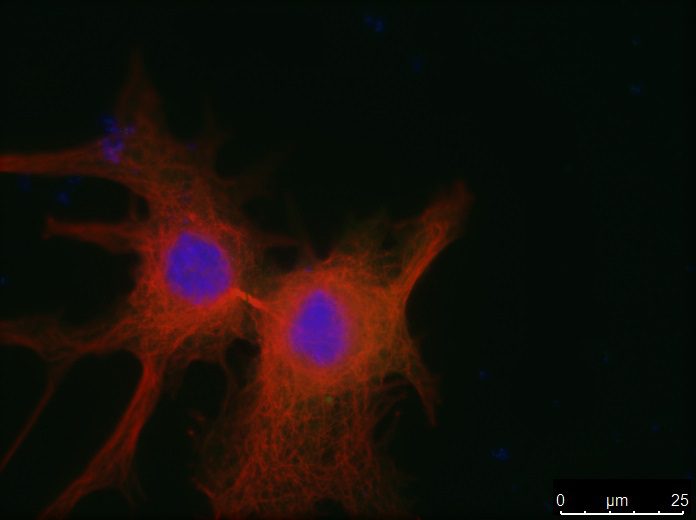 This finding, made by researchers from CNIO and Germany’s Cancer Research Centre (DKFZ), is published in Nature Communications

Overexpression of the Plk1 gene is found in many tumours, which is why it was considered a tumour promoter. But it has now been seen that in some breast tumours, its function is the exact opposite.

“Understanding when Plk1 acts as an oncogene and when it acts as a tumour suppressor is clinically extremely relevant when it comes to using this gene as a therapeutic biomarker", state the authors of the paper.

A gene that has for decades been considered a tumour promoter, the Plk1 gene, can also perform the exact opposite function: halting the development of cancer. This finding was made by researchers from CNIO and DKFZ, in Germany, and is being published this week in the journal Nature Communications. The role of PLK1 as a target for powerful drugs must now be reviewed since, depending on the type of tumour to be treated, it might be useful to inhibit it, or it might not. For the time being, the scientists have discovered that the expression of Plk1 in breast tumours can determine a different prognosis, depending on the tumour sub-type.

The Plk1 gene is essential for the division and proliferation of tumour cells. It has been known for years the overexpression of Plk1 is found in a large variety of tumour types, and on occasions this overexpression is associated with poor prognosis (when a gene is overexpressed in the cell, there is an excess of the protein produced by that gene). For that reason, Plk1 has for decades been considered an oncogene, a gene that promotes the development of tumours. PLK1 is also a therapeutic target, since inhibiting its activity induces the death of cell tumours. In fact, there are PLK1 inhibitors already at advanced clinical stages. However, curiously, the oncogenic nature of PLK1 has never been formally demonstrated. In other words, until now, no experiment has been designed to demonstrate that the overexpression of PLK1 does indeed contribute to tumour development.

That was the initial aim of researchers from Spain’s National Cancer Research Centre (CNIO – Madrid) and Germany’s Cancer Research Centre (DKFZ – Heidelberg) at the start of this joint research project. To this end, they modified the genome of a mouse so that it was possible to overexpress the Plk1 gene at will in these animals.

The first thing they noted was that these animals did not develop any more tumours than the normal mice. They then crossed their mice with others that expressed the oncogenes H-Ras or Her2 in their breast tissue, and hence they developed very aggressive breast tumours. They expected a much greater incidence of cancer, but the result was unexpected: by overexpressing Plk1 together with the oncogenes, the incidence of tumours was reduced drastically. “That was when we realised that something important was happening,” explained Guillermo de Cárcer, one of the lead researchers on this study at CNIO. “And in effect we have shown that not only does Plk1 not act as an oncogene, but surprisingly it acts as a tumour suppressor“.

Plk1 as an indicator of breast cancer prognosis

Not only does this paper describe the novel action of PLK1 as a tumour suppressor, it also identifies the molecular mechanism of how this suppression occurs. “We have seen that the overexpression of Plk1 increases the number of chromosomes in cells, because after they divide, cells cannot correctly segregate their chromosomes”, said Rocío Sotillo, lead researcher with the Molecular Thoracic Oncology Group at DKFZ.

The fact that PLK1 acts as a tumour suppressor could call into question therapeutic strategies based on the inhibition of Plk1. However, Marcos Malumbres, head of the Cell Divisionand Cancer Research Group at CNIO and coordinator of the paper, trusts that the inhibition of Plk1 is still a valid and useful option. “The fact that Plk1 is a tumour suppressor instead of an oncogene does not mean that PLK1 inhibitors will not be effective against cancer“, said Malumbres. “Many essential components in cell proliferation can be used as targets against cancer in spite of not having any oncogenic activity, owing to the addition of cancer cells to specific cell processes such as cell division”. In addition, the work of these researchers bestows value on the Plk1 gene as an oncological biomarker: “Understanding when Plk1 acts as an oncogene or as a tumour suppressor, and in which types of tumours this happens, is clinically extremely relevant when it comes to using this gene as a therapeutic biomarker“, stresses Guillermo de Cárcer.