Gut. Diabetes type 3c is confirmed as an early manifestation of pancreatic cancer 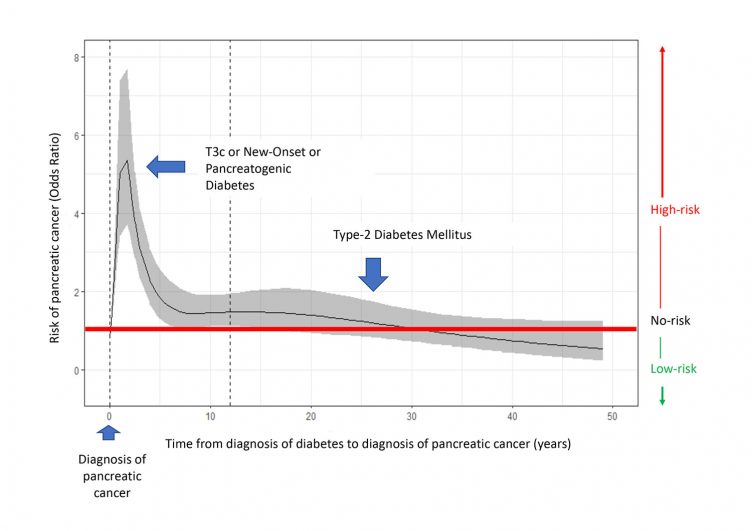 The high mortality of pancreatic cancer is a consequence of late diagnosis because of the absence of symptoms in the earliest stages, and defining risk populations is therefore crucial to be able to carry out diagnostic tests that reveal the presence of the tumour as early as possible

The CNIO team of researchers confirms that a high percentage of cases of diabetes type 3c is caused by this type of cancer; this finding should prompt further research to allow these patients to enter in early pancreatic cancer diagnosis interventions to increase their survival rate

The team used data from more than 3,500 persons from PanGenEU, a large European study led by the researchers themselves, involving centres from six countries, including Spain, to analyse the relationship between multiple risk factors and pancreatic cancer

The Genetic and Molecular Epidemiology Group, led by Núria Malats at the Spanish National Cancer Research Centre (CNIO), shows the need to continue to improve these classifications: the team published in the journal Gut the results of a European case-control study showing that one of the most recently identified types of diabetes, type 3c or pancreatogenic diabetes, could also be an early manifestation of pancreatic cancer.

This type of cancer has a high mortality rate – around 95% – since it is usually diagnosed too late because of the absence of symptoms in its early stages. Therefore, the finding of the CNIO would imply that it is possible to make an earlier diagnosis of this disease since it allows classifying patients with diabetes type 3c as a population with an increased probability of having early stage pancreatic cancer.

Diabetes and pancreatic cancer are connected because the pancreas secretes insulin; in diabetic people, this does not occur in a normal way. It is estimated that around 50% of patients with pancreatic cancer presents diabetes. But it is an outstanding challenge for researchers to figure out which is the cause and which is the consequence.

Until now, the most common approach has been to study if diabetes could cause pancreatic cancer. “Our team turned the equation around and, for the first time, we asked the question whether pancreatic cancer could cause diabetes,” explains Núria Malats, senior author of the paper. “Using innovative epidemiological and statistical analysis strategies, we found that pancreatic cancer is the cause of the development of diabetes type 3c in 26% of cases.”

Type 3c, or pancreatogenic, diabetes is characterised by an inflammation of the pancreas that interrupts insulin production. It is estimated to represent around 5-10% of all diabetes cases in Western countries, but currently there are few specific markers for it so that it is often misdiagnosed as diabetes type 2. More precise markers to identify it correctly are required; not only to provide adequate treatment to patients but also because the CNIO now shows that a correct classification is crucial for the early diagnosis of pancreatic cancer.

To conduct the study, the team used data from more than 3,500 persons from PanGenEU, a large European study involving centres from six countries, including Spain, and led by Malats, to analyse the relationship between multiple risk factors and pancreatic cancer.

To be able to confront pancreatic cancer at earlier moments, risk populations must be first defined so that they can be monitored to detect the tumour and act on in its early stages. “Using the information from our study, the national health systems could identify possible as yet undetected pancreatic cancer patients, if the patients, in addition to having type 3c diabetes, also have certain risk factors associated with this cancer, such as being obese or a smoker,” says Malats. “All of these factors would help family doctors better select patients who could benefit from more active monitoring or entering screening programs. Our discovery can be transferred to the National Health Systems as a factor to be taken into account for the early detection of pancreatic cancer.”

The researchers wanted to test if type 2 diabetes could also be connected to this cancer, but in this case, the study was unable to establish a clear causal link. “We have seen that the relationship between pancreatic cancer and type 2 diabetes is very complex, with obesity playing a role, too. Further studies are required to fully understand how the metabolic state is reached in which all these phenomena arise.”

The study was funded by the Spanish Health Research Fund, the Carlos III Health Institute, CIBERONC, the Spanish Thematic Network for Cooperative Research in Cancer, the European Cooperation in Science and Technology, the Italian Association for Cancer Research, Cancer Focus Northern Ireland, and ALF (Sweden).