Home | News | Basic Research | Defective telomeres are now being linked to dozens of diseases, including many types of cancer

TIBS. Defective telomeres are now being linked to dozens of diseases, including many types of cancer

Studying telomeres, the structures that protect the ends of chromosomes, has become a key issue in biology. In recent years, not only has their relation to ageing been confirmed; defective telomeres seem to be linked to more and more illnesses, including many types of cancer. The review published by Paula Martínez and María Blasco from the CNIO in Trends in Biochemical Sciences, stresses the importance of investigating these structures to improve diagnoses and develop possible treatments for many diseases. Telomeres, in the opinion of these researchers, will become increasingly important in clinical studies.

The chromosomes in every single cell are made up of DNA and shaped like strands, with a kind of protective cap at the end of each strand of DNA. Without this end protective cap, the DNA strands would chemically bond to other strands, i.e. the chromosomes would merge and that would be lethal for the cell. The structures that prevent this catastrophe are the telomeres. They were discovered in the 1930s but decades elapsed before someone decided to study them in any depth and since the late 1990s they have always been on the cutting edge of biology research. Biologists are often surprised by their amazing and unexpected complexity, and their health-­?related significance.

“The biology of telomeres is extremely complex and the more we discover the more we realise what remains to be discovered”, says Paula Martínez from CNIO’s Telomere and Telomerase Group. “What surprises me most is the high number of factors we are finding that are essential to the preservation of telomeres and, above all, the precise coordination that is required between them all”.

The fact that telomeres have been tightly preserved throughout the evolutionary tree –in most eukaryotes: vertebrates, plants and even unicellular organisms such as yeast– indicates their importance. In addition to preventing the merger of chromosomes, telomeres are needed to prevent the loss of genetic information each time a cell divides.

When a cell replicates, the molecular machinery in charge of duplicating the chromosomes -­? so that each daughter cell has a copy –cannot reach the tip. This is inherently impossible due to the way the DNA replication machinery works, and it implies that any genetic material at the end of a chromosome with significant information for the cell would be lost. Telomeres prevent this from happening: they consist of a DNA sequence that does not contain genes and that is repeated numerous times– in humans and other species the sequence is TTAGGG; the letters correspond to three of the building blocks that make up the DNA: thymine, adenine and guanine.

Consequently, the shortening of the DNA with every division is not significant. At least not until a certain limit is reached. When the telomeres become too short, we see the problems associated with ageing: cells reach a point where they interpret critically short telomeres as irreparable damage and react by no longer dividing, which prevents tissue from regenerating.

This happens in healthy cells but not in cancer cells. There is an enzyme, telomerase, which is capable of lengthening the telomeres de novo. This enzyme is not present in most cells of an adult organism but it is active in tumour cells. By repairing the telomeres, the telomerase enables cancer cells to proliferate and become virtually immortal.

This link to ageing and cancer, has led to the intense study of telomere-based strategies to combat cancer and diseases associated with ageing. Blasco’s group has recently shown that it is possible to make cancer cells mortal by acting on the telomeres.

ZOOMING IN TO THE TIP OF THE BUFFER

The above-­mentioned description of telomeres however is a simplified version of the story. We now know that there is a protective structure enveloping telomeric DNA consisting of six proteins known as shelterins, which are crucial. Another more recent discovery is that there are proteins that, although not in the telomeres themselves, interact with them at specific times to enable them to perform their functions.

These proteins enable the telomeres to unwind, for example; because, the sequence repeated in telomeres, TTAGGG, ends in a single strand of DNA that curves forming a loop and connects to the original strand of the double chain forming a triple chain. “Yes, it is very complicated”, admits Martínez. “Structures of up to four chains of DNA can form”.

When a cell divides, the telomeres are also replicated. This implies that the end loop must unwind first and then form again. This process also contributes to the shortening of telomeres and we now know that some of the shelterins as well as other associated proteins that interact with telomeres are key elements in this process.

According to Martínez, “there is now more evidence about relationship between telomere maintenance and several illnesses”.

Telomere syndromes, or telomeropathies, have been identified in patients with mutations of the telomerase enzyme. This group includes, for example, pulmonary fibrosis and problems related to the malfunction of the bone marrow. A direct relationship between telomere dysfunctions and many types of cancer has also been found. More recently, we have also discovered that mutations of the proteins that protect telomeric DNA, the shelterins, and those that interact with the telomeres, are linked to various diseases, such as dyskeratosis congenita, Hoyeraal-­?Hreidarsson syndrome or Revesz syndrome.

“These discoveries underline the plethora of components and pathways that control telomere functions”, write the authors in the paper. “In the future, research will bring to light more unknown factors that will improve our understanding of the mechanisms governing cancer and syndromes linked to the shortening of telomeres. We hope that this knowledge will be transferred to the clinic in order to improve the diagnosis and treatment of diseases”.

Blasco’s laboratory is funded by the Ministry of Economy and Competitiveness, the European Union, and the Fundación Marcelino Botín and Banco Santander through Santander Universities, among others. 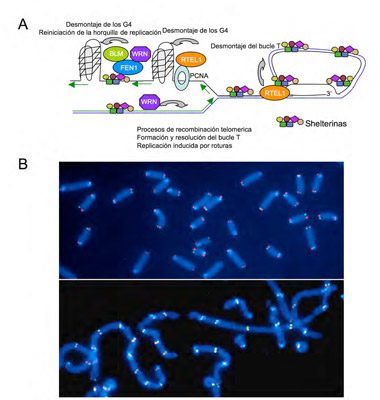