Monitoring of over 1,300 patients reveals that the 10-year survival rates for BRCA mutation carriers who undergo radiation therapy are half those for non-carriers

Prostate cancer patients carrying inherited mutations in the BRCA genes respond less well to conventional treatment, including surgery and/or radiotherapy – and they also have a lower survival rate than those who are non-carriers of these genetic mutations. Data from the study, which has been published in the journal European Urology, points to the need for new clinical trials aimed at targeting these mutations in order to tailor treatment for these patients.

The study has been led by David Olmos and Elena Castro at the Spanish National Cancer Research Centre (CNIO) and Rosalind Eeles at the Institute of Cancer Research & Royal Marsden NHS Foundation Trust in the UK.

10-YEAR SURVIVAL REDUCED BY HALF

The findings originate from a 2013 study published by the same group of researchers in which they observed that patients carrying inherited mutations in the BRCA genes suffered from more aggressive tumours and died earlier. “That was when we found the first genetic factor associated with prostate cancer prognosis,” explains Castro (for further information)

It was then that the researchers decided to conduct a more in-depth study of patients with inherited BRCA mutations and the treatments applied to them, radiotherapy or surgery. According to the article, the results are unambiguous: regardless of the treatment received, patients with tumours at a localised stage (that is, non-metastatic tumours) do not respond as well to the current treatments as patients not carrying the mutations.

CHANGE OF TREATMENT STRATEGY FOR THESE PATIENTS

Still to this day, the prognostic factors that would help determine a more personalised treatment are unknown. Smaller, less aggressive tumours are surgically removed; larger and/or more aggressive tumours are treated using surgery and radiation therapy. “An important issue is that during consultation we usually cannot predict which patients will evolve less favourably and which will live less time than others,” the researcher explains. The team’s objective is to identify the subgroup of patients with the least favourable prognosis and the treatments that best match their genetic characteristics.

BRCA genes produce proteins that block tumour development, thereby guaranteeing the stability of the genetic material in cells; when the DNA gets damaged by environmental, hereditary or other factors, BRCA proteins come into play to fix it and therefore guarantee the survival of the cells. Specific mutations in these genes prevent damaged cells from repairing the DNA efficiently and have been associated with various types of cancer, including breast, ovarian and prostate cancer.

PARP inhibitors are used as tools for specifically targeting the destruction of tumour cells with BRCA mutations. These molecules, which are currently in clinical trials for the treatment of prostate cancer, are proving to be very effective in the treatment of breast and ovarian cancer when there are BRCA mutations. Furthermore, “prostate tumours with sporadic mutations [present only in the tumour, not inherited] in BRCA, also respond to these inhibitors, according to recent data presented during the ESMO [European Society for European Oncology] congress in Madrid,” states Olmos.

The conclusions of this study underline the importance of launching clinical trials designed to assess new treatment strategies and the therapeutic potential of novel drugs for prostate cancer in these patients, such as PARP inhibitors.

If this hypothesis is confirmed “there would be a need for closer monitoring of patients with BRCA mutations, regardless of the origin [hereditary or sporadic], in order to improve the clinical course of these patients.”

Prostate cancer is the second most common form of cancer affecting men in the world – and the most common in some countries, including Spain, where 25,000 new cases are diagnosed every year. It is believed that 2% of these patients are carriers of hereditary BRCA mutations, while 12% of the patients have sporadic mutations in the same genes.

The relevance of this work and its implications for the improved care of prostate cancer patients were recognised last year at the Genitourinary Cancers Symposium organised by the American Society of Clinical Oncology (ASCO), which awarded the preliminary research work a Merit Award.

The study has been financed by the Ronald and Rita McAulay Foundation, the CRIS Foundation for Cancer Research, the Spanish Association against Cancer (AECC), the GAME-ON initiative, and the European Union. 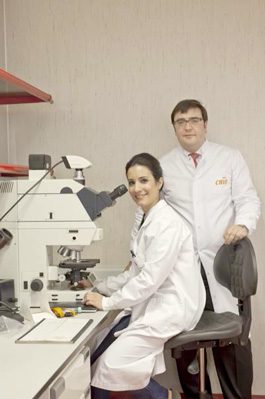