Molecular Cancer Therapeutics. Discovered a combination therapy that could improve the survival of patients with aggressive brain tumours 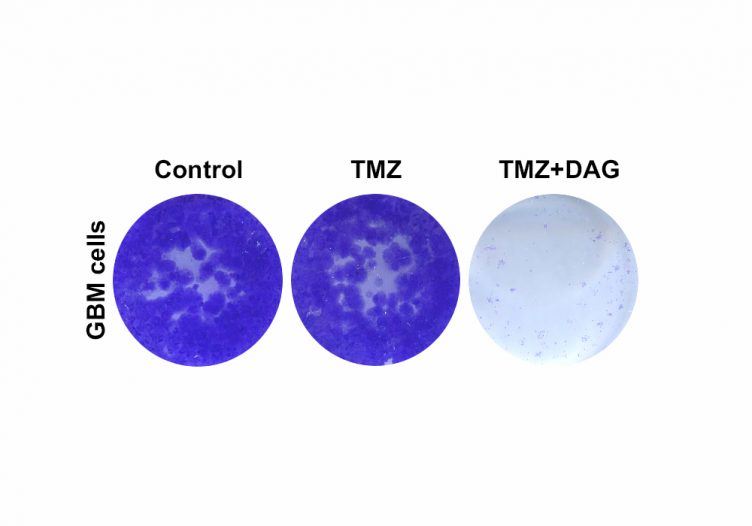 The combination of temozolomide (TMZ) with dianhydrogalactitol (DAG; culture dish on the right) is able to kill glioblastoma cells resistant to conventional therapy with temozolomide alone (TMZ; centre). /CNIO

The researchers conducted an in-depth study of resistance to temozolomide, the first-line treatment for glioblastoma, to which many patients cease to respond over time

The combination of temozolomide and dianhydrogalactitol acts synergistically, overcomes this resistance and increases survival in mice with brain tumours

Treatments for glioblastoma have not improved in the last 20 years. The authors argue for the need to translate these results into clinical trials to study whether this combination therapy is also effective in patients with this disease

Glioblastomas are the most common and most aggressive brain tumours. Their survival rate has barely increased over the last 50 years, indicating an urgent need to develop new therapeutic strategies. In a paper published this week in the journal Molecular Cancer Therapeutics, a journal of the American Association for Cancer Research, the team led by Massimo Squatrito, Head of the Seve Ballesteros Foundation Brain Tumour Group at the Spanish National Cancer Research Centre (CNIO), proposes a novel therapeutic strategy based on the combination of temozolomide, the first-line treatment for these patients, and dianhydrogalactitol, a drug that is being tested in clinical trials and is already approved for the treatment of other tumours.

Currently, the main and virtually only treatment for glioblastomas is the combination of radiotherapy and the chemotherapy agent temozolomide, after surgical resection of the tumour mass. Like most chemotherapeutic agents used, temozolomide induces damage to the genetic material of tumour cells, causing them to break down and die.  However, in almost half of the patients, such tumours become resistant to the drug and the tumour continues to grow even while undergoing treatment.

“Although the incidence of glioblastoma is not excessively high in adults, they are the most common brain tumours, and there are no effective treatments or markers of response to treatment or of the generation of resistance,” says Squatrito.

DNA repair, the basis of resistance

Why do patients with glioblastoma stop responding to temozolomide? Squatrito and his team shed light on this central question last year in a paper published in the journal Nature Communications: some glioblastomas produce genomic rearrangements in the DNA repair gene MGMT, which increases its production and repairs the DNA damage induced by temozolomide so that the tumour manages to grow and evade treatment.

In the paper published now, the researchers studied temozolomide resistance in depth by using glioblastoma cell lines in which several key genes were silenced. The results show that this resistance not only depends on the MGMT gene but that it may also be mediated by failures in the MMR (DNA repair) pathway so that when any of its components are altered, tumour cells accumulate mutations that give them the ability to evade the effects of temozolomide.

Tumours are complex systems that use multiple tools to trick the body into supporting their growth and development. Combination therapies, targeting several components involved in the tumour process, are a revolution that brings hope to many patients. Advances in the understanding of the molecular biology of tumours allow the emergence of new therapies and targeted combinations thereof to fight the tumours and to avoid any type of resistance they may develop.

In the present study, the researchers focused on the drug dianhydrogalactitol, a chemotherapeutic agent that is able to cross the blood-brain barrier and reach the central nervous system, where it induces DNA damage in tumour cells. Dianhydrogalactitol is currently being tested in clinical trials for gliomas and other types of cancer such as ovarian cancer and is already approved in China for the treatment of acute myeloid leukaemia and lung cancer.

The results of this study show that temozolomide and dianhydrogalactitol act synergistically on tumour cells in vitro, resulting in slower growth of these cells compared to when they are treated with each drug individually. The researchers observed similar results in mice with brain tumours, which survived longer when treated simultaneously with temozolomide and dianhydrogalactitol.

Furthermore, the results suggest that, unlike temozolomide, the anticancer effects of dianhydrogalactitol are independent of the MGMT DNA repair gene and the MMR pathway. “Our data show that dianhydrogalactitol could be an effective treatment that circumvents the resistance mechanisms that arise during temozolomide treatment,” explains Miguel Jiménez-Alcázar, first author of the paper.

“The results we obtained with this study are of great interest, as they could lead to a substantial improvement in the evolution of these patients,” says Squatrito. “It now becomes a matter of urgency to take these finding to clinical practice to see if this combination of drugs increases survival; both drugs are clinically available, which could accelerate the timeline of this new approach,” he concludes.

This study was funded by the Spanish Ministry of Science and Innovation, the Carlos III Health Institute, the Seve Ballesteros Foundation, the Spanish Association against Cancer (AECC) and the European Molecular Biology Organisation (EMBO).