Cell Reports. CNIO and CNIC researchers find clues to clarify why the protein that ‘embraces’ chromosomes has a role in cancer and cardiac development 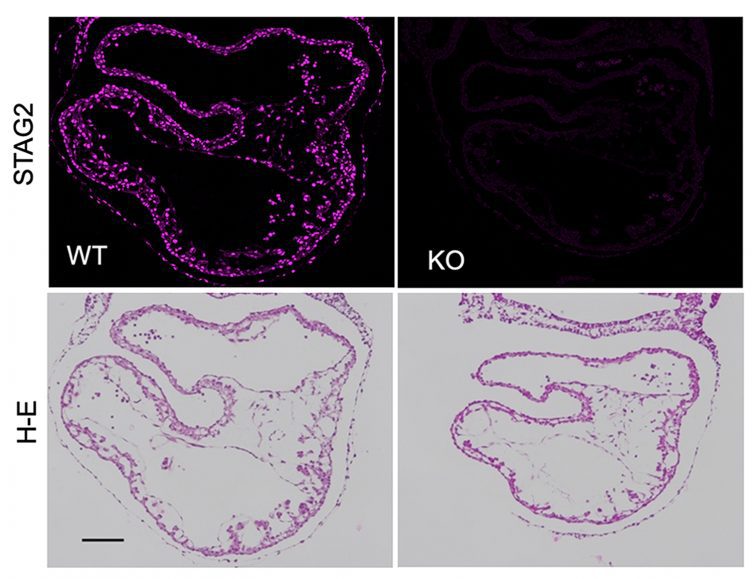 In 1998, Spanish researcher Ana Losada, who is currently working at CNIO, identified cohesin in vertebrates, a protein that is essential for chromosome segregation in dividing cells. Today, we know that cohesin has a role in cancer, and researchers worldwide are studying why this is so

The classical image of a dividing cell shows the chromatids of duplicated chromosomes held together at the centromere forming an X. Cohesin, the DNA binding protein, is so important that it has been evolutionarily conserved for millions of years: frogs’ cohesin is very similar to that of humans

Losada and Paco Real from CNIO, and Miguel Manzanares from CBMSO are publishing their recent findings on the role of cohesin in high-impact journal ‘Cell Reports’

Ana Losada, from the Spanish National Cancer Research Centre (CNIO), is the scientist who identified cohesin in vertebrates, a protein that is essential in cell division. Losada has studied cohesin since she identified it in vertebrates in 1998, at the Cold Spring Harbor Laboratory in New York. “It is fascinating,” she says. “Now we know that cohesin plays a role in several types of cancer, and a large number of researchers worldwide have become greatly interested in this protein complex.”

This week, Losada, Head of the Chromosome Dynamics Group at CNIO, is publishing a paper about her team’s new finding on the role of cohesin in the high-impact journal Cell Reports. Co-authors are Paco Real, Head of the Epithelial Carcinogenesis Group at CNIO, and Miguel Manzanares, Head of the Functional Genomics Research Group at the Spanish National Centre for Cardiovascular Research (CNIC), currently at the Severo Ochoa Centre for Molecular Biology (CBMSO). Andrés Hidalgo, Head of the Imaging the Cardiovascular Inflammation and the Immune Response at CNIC has also participated in the study.

Cohesin has a role in chromosome segregation, forming a ring that “embraces” DNA. The classical image of a dividing cell shows the chromatids of duplicated chromosomes held together at the centromere forming an X. Cohesin holds the sister chromatids together in a bond that is dissolved at the end of the cell division process and in this way ensures their equal distribution to daughter cells.

Cohesin was first discovered in budding yeast, a single-cell microorganism. Losada identified it in an amphibian, the African clawed frog (Xenopus laevis), whose cohesin is similar to that of humans.

A new field of research was opened that has since then attracted the interest of several research teams worldwide. There is a lot to study in this field. Cohesin “has been evolutionarily conserved in very different species for millions of years, which means it has a very important role,” Losada says.

Soon afterwards, other functions of cohesin were discovered. In addition to holding the two chromosome copies together until the daughter cells separate at the end of the cell division process, cohesin “participates in genome architecture, in DNA spatial organisation,” Losada adds. Cohesin participates in the appropriate folding of chromosomes, which is essential for the information encoded in the genome to be read at the right moment and in the right cell types.

Approximately five years ago, mutations in genes encoding cohesin were identified in several types of cancer. In bladder cancer, for instance, cohesin mutations are very common, as found by the CNIO groups headed by Paco Real and Núria Malats. Furthermore, mutations in genes encoding cohesin and its regulators are associated with rare diseases known as cohesinopathies. These findings have attracted the interest of more research groups worldwide.

Currently, Losada is no longer studying frogs but mice, the main animal model at CNIO. Her study throws light on the mechanisms of cohesin function and what happens when it does not wo properly.

“Actually, cohesin is a protein complex made of multiple subunits,” Losada explains. “Cells have two versions of this complex; one of them carries the STAG1 subunit, and the other, the STAG2 subunit. Although they are similar, they are not identical, so we want to understand why they are there, what they do and what the consequences are if the cell loses one or the other.”

The answers to these questions motivated by curiosity will most probably help scientists understand the biology of cancer and other diseases.

In the new article published in Cell Reports, Losada, Real and Manzanares report the generation of a mouse model where they were able to inactivate the STAG2 subunit in different development stages, including the adult stage. They found that STAG2 was mostly nonessential in adult animals: its inactivation in all tissues did not cause tumours, but was detrimental to the health of the animals.

In embryos, however, STAG2 is essential. This means that embryos lacking STAG2 die before birth; their overall development is delayed, and they show severe defects in cardiac development.

The finding may seem just a small puzzle piece, but it will probably help scientists understand the functioning of cells and organisms better. “Our results provide substantial evidence of the specific functions performed by the different subunits of the cohesin complex in different cells and tissues and how their malfunction is associated with disease,” the authors of the article add.

The study was funded by the Spanish Ministry of Science and Innovation, the Institute of Health Carlos III, the Spanish State Research Agency, the European Regional Development Fund, the Spanish Association Against Cancer (AECC), and the Pro CNIC Foundation.