Blocking the Cdh1 protein, previously proposed as a tumour suppressor, prevents cell growth and could be used therapeutically to treat cancer

The results are published today in the journal Nature Communications

The laboratory of Marcos Malumbres, who is head of the Spanish National Cancer Research Centre’s (CNIO) Cell Division & Cancer Group, working alongside Isabel Fariñas’ team from the University of Valencia, shows, in a study published today in the journal Nature Communications, how in mice the elimination of the Cdh1 protein—a sub-unit of the APC/C complex, involved in the control of cell division—prevents cellular proliferation of rapidly dividing cells. These results could accelerate the development of new therapies targeting cancer.

Malumbres’s group had previously discovered that the inactivation of another APC/C protein, Cdc20, prevented cell division. These results caught the attention of pharmaceutical companies, who are already developing the first inhibitors from the complex. These molecules have caused controversy due to the possible side effects of blocking Cdh1, which is considered a tumour suppressor.

Manuel Eguren has analysed the biological consequences of Cdh1 elimination in rapidly dividing cells, as part of his doctoral research project in Malumbres’s group; he focused on progenitors from the nervous system during embryonic development in mice.

Via a detailed biochemical and cell study, researchers have discovered that the absence of Cdh1 causes DNA damage in cells. This defect causes cell death and leads to alterations in the development of the nervous system such as hydrocephalus, characterised by abnormal accumulation of fluid on the brain.

“Our results solve the controversy about the possible side effects of APC/C inhibitors”, says Malumbres, adding that: “we have shown in vivo that their elimination leads to the death of rapidly dividing cells”.

The study is now focused on proposing a precise strategy for specific tumour types. “It could work in glioblastomas given that our study is based on brain progenitors, but we believe it could be extended to include other tumour types”, say the researchers.

The CNIO researchers show that cell defects caused by the inhibition of Cdh1 are independent of the presence of the p53 molecule, which is mutated in different types of tumours. “The therapeutic effect of inhibiting Cdh1 should even work in tumours that carry mutations in this molecule”, says Malumbres. 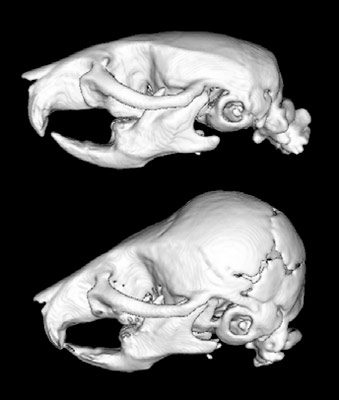 Skulls from normal mice (upper section) and from mice with a Cdh1 deficiency (lower section), whose cranial capacity has increased due to hydrocephalus and defects in the proliferation of neural progenitor cells. /CNIO