Melanomas can be distinguished from other tumours by the partial loss of the ATG5 autophagy gene that increases their aggressiveness and resistance to existing drugs.

These data support the use of ATG5 as a molecular marker of the metastatic capacity of melanomas which, to date, was calculated based on the tumour size.

This finding has practical implications for the design of clinical trials and opens the way to the study of less well-known melanomas, such as ocular melanoma. 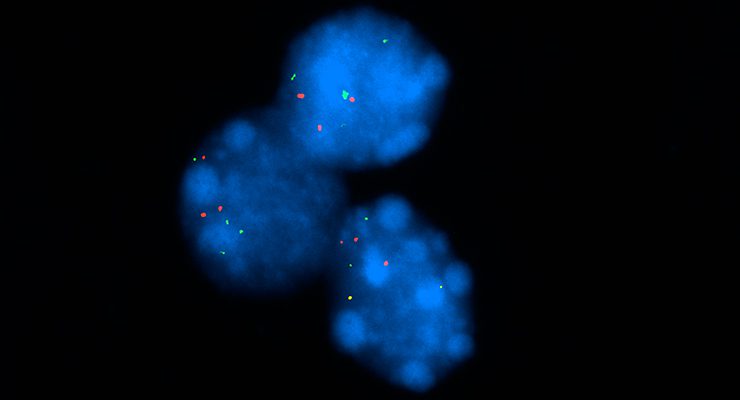 Visualizing the number of copies of ATG5 in melanoma cells. The image corresponds to nucleus (in blue) of melanoma cells stained for FISH (fluorescence in situ hybridization). The red dots correspond to ATG5 and the green ones to another gene in the same chromosome. Note the reduced number of ATG5 (red dots)./ CNIO

Melanoma is one of the types of cancer that poses the greatest challenge to researchers because it manifests itself in many ways, it contains a large number of mutations and displays high metastatic capacity. To date, clinicians mostly base their diagnosis on observation, such as by measuring thickness: a tumour depth of only two millimetres implied a poor prognosis.

Now, however, in a study aimed at identifying oncogenes that are particularly altered in this tumour type, scientists from the Melanoma Group at the Spanish National Cancer Research Centre (CNIO), headed by Marisol Soengas, have discovered a peculiarity of melanomas, something that might make them vulnerable: patients with partial loss of a protein called ATG5 have a worse prognosis, i.e., they develop metastasis and resistance to drugs. The results of this study have been published today in the journal, Autophagy.

THE “KEY” THAT REGULATES THE METASTATIC CAPACITY OF MELANOMA

The ATG5 protein is essential for autophagy; a process that is usually beneficial for cells to self-degrade their own components when they are no longer useful. However, autophagy can also be a double-edged sword for tumour cells: any excess self-cannibalism can be harmful, so cells have to be very careful about how they regulate and to what levels they trigger this process to survive. The factors that act as “keys” or switches of autophagy are still unknown today.

“In this study, we wanted to discover to which extent autophagy is important for melanomas in comparison with other pathologies, and set to investigate mechanisms that underlie dual pro- and anti-tumourigenic functions of this process”, says Marisol Soengas. “We analysed up to 20 autophagy genes in more than 25 types of cancer using databases that contained information of almost five thousand patients. We proved a huge variability between the different types of tumours. However, we found alterations in the ATG5 gene that only provided diagnostic value in melanoma”. In particular, they demonstrated that melanoma cells limit ATG5 levels in a very specific way: by selectively losing one of the copies of this gene; a process that does not occur in relation to other autophagy factors.

To study the role of ATG5 in vivo, they created genetically modified mice where they induced a selective loss of one of the copies of the ATG5 gene. The researchers found that, only when one copy of this gene is lost, the tumours have a poor prognosis (metastasis and death) just as they had observed in patients.

Further, in these animal models, the team also made another observation; in this case, of potential therapeutic value: “We discovered that when tumours lose only one copy of ATG5, they not only become more aggressive and metastatic, but also respond worse to current drugs used for targeted therapies in melanoma”, explains the researcher.

“Therefore, we have a switch that regulates autophagy and favours metastasis. We believe that this information will greatly enhance our capacity to predict prognosis”. In other words, use the genetic information on ATG5 to identify the risk of disease progression and to improve patient monitoring.

“This study has relevant implications for drug design, as it suggests that the partial blockage of autophagy could worsen the malignant behaviour of metastatic melanomas”, says Soengas.

This molecular marker commonly found in cutaneous melanoma will also open up other areas of research on less common and less-studied melanomas, such as ocular or mucous melanomas. “The chromosome where ATG5 resides is lost in ocular melanoma, which suggests that it is worth exploring its role in this type of melanoma”, concludes Soengas.

This study was funded by grants from the Spanish Ministry of Economy and Competitiveness and the Melanoma Research Alliance. Additional funding included predoctoral fellowships from La Caixa Foundation.