This study has been published this week in ‘Molecular Cell’

The occurrence of chemotherapy resistance is one of the major reasons for failure in cancer treatment. A study led by Óscar Fernández-Capetillo, Head of the Genomic Instability Group at the Spanish National Cancer Research Centre (CNIO), has identified a new determinant of chemotherapy resistance. In this regard, they employed ATR kinase inhibitors, which were previously described by the group as a cancer treatment strategy, and that could be tested on humans as early as 2017, according to the researcher. The determining factor is a protein that often appears increased in cancer cells, CDC25A. This discovery, which is published in Molecular Cell, opens up new avenues for novel and more effective treatments as well as a way to predict which patients will particularly benefit from a therapy with ATR inhibitors.

Most chemotherapy agents are drugs that destroy the DNA of cancer cells. In this case, the CNIO’s strategy is targeting ATR kinase; a protein that is responsible for repairing the genome. This protein, “is present in all cells, both in healthy and cancerous cells; however, its function in tumour cells is even more vital because their genome is highly fragmented and needs to be repaired frequently so as not to become unstable and die,” says Fernández-Capetillo. Disabling this genome guardian element in tumour cells is catastrophic for them, he adds, “it is like killing the fireman in the middle of a forest fire.” This explains why this treatment is more toxic to tumour cells and not so toxic in the healthy tissues surrounding them.

CRISPR AS A NEW ALLY

In this project, the researchers have tried to anticipate the potential for the emergence of resistance during therapy in the clinic. In order to identify possible mutations that may confer resistance to ATR inhibitors in cells, the researchers made use of a new ally: the CRISPR genome editing technology. By implementing this technology, they generated a collection of cells, in which each cell contained a different mutated gene. “Taking into account that a mouse has around 20,000 different genes, it would have taken much longer to generate a collection of mutants like these using any other modification technique,” explain Sergio Ruiz and Cristina Mayor-Ruiz, first authors of the study.

By subjecting the cells to treatment with ATR inhibitors, they were able to isolate some that were resistant to the treatment and subsequently identify the mutation they were carrying. It was demonstrated that cells with mutations in the CDC25A gene survived.

“CDC25A is a protein that is normally highly expressed in tumours,” explains Fernández-Capetillo. “This paper suggests that a way of identifying patients who will respond more successfully to treatment is by determining those whose tumours have higher levels of CDC25A.” In addition to finding a mutation that allows cells to become resistant to treatment, the researchers also identified a treatment capable of eliminating resistant cells.

The rights to develop drugs based on the ATR kinase inhibitors discovered at the CNIO belong to Merck Serono, with which the Centre reached an agreement in 2013 in exchange for potential revenues totalling 19 million euros.

Fernández-Capetillo believes that the results of the study and the ongoing research at the CNIO will help the pharmaceutical company to select a suitable patient population for chemotherapy clinical trials. “The tumours that seemed to be most sensitive to this treatment are those that are most unstable, with more genome damage; this makes them more dependent on ATR-mediated repair in order to survive,” he explains. In what regards to which tumours could particularly benefit from this treatment, Fernandez-Capetillo reports that the group has already identified two cancer types — in mice — in which the therapy is particularly efficient, results that they hope to make public this year.

The study has been funded by the Spanish Ministry of Economy and Competitiveness, the Botín Foundation and Banco Santander through Santander Universities, the Fundació La Marató of TV3, the Howard Hughes Medical Institute and the European Research Council (ERC). 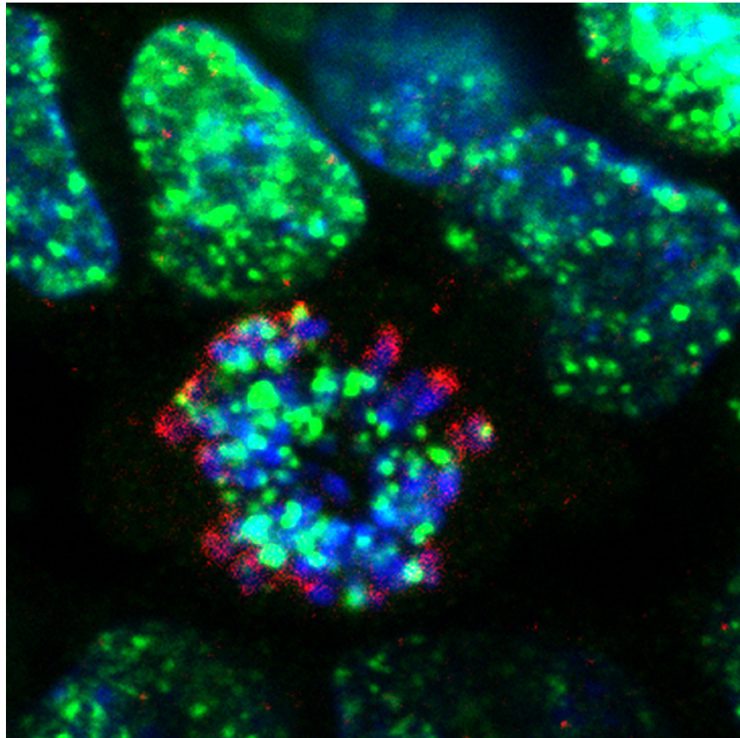 Cell treated with ATR inhibitors developed at the CNIO. The treatment generates breaks in the DNA of cells. Each green dot indicates the presence of a break. Chromosomes are stained in blue.  /CNIO