For the first time, researchers have linked psoriasis to the risk of widespread bone loss and describe how the protein IL-17 acts as a 'messenger' between the skin and the bones

IL-17 inhibitors, some of which already on the market, could simultaneously address skin inflammation and associated bone loss

Researchers from the Genes, Development and Disease Group, headed by Erwin Wagner at the Spanish National Cancer Research Centre (CNIO) have discovered that psoriasis patients experience a widespread bone loss as a result of the disease. In addition, this paper, which is being published in the journal Science Translational Medicine, describes the molecular communication that is established between the inflamed skin and loss of bone mass. This discovery highlights the possibility to treat psoriasis with drugs that are already on the market, or in advanced clinical trial stages, that would have additional benefits for the bone.

Psoriasis is a chronic autoimmune disorder that affects 2% of the world population and more than one million people in Spain. It is characterised by inflammation and scaling of the skin, accompanied by a greater risk of contracting some type of metabolic syndrome, predisposing patients to pathologies, such as obesity, diabetes or cardiovascular diseases. Now, CNIO researchers have discovered a new feature of this inflammatory disorder.

“We have detected that psoriasis causes the widespread and progressive loss of bone tissue,” explains the researcher Özge Uluçkan, first author of the study. “There is no active destruction of the bone; on the contrary, during the bone regeneration cycle, bone is not formed at the necessary speed to replace what is being lost and, therefore, patients’ bone mass reduces over time.” The process takes place by means of a mechanism  —unveiled in this study — that inhibits the activity of the osteoblasts, the cells that produce the bone matrix so that bones can grow during childhood and youth, and remain in good condition in adulthood.

IL-17, A CHANNEL OF COMMUNICATION BETWEEN THE SKIN AND BONE

In a previous study (Meixner et al, Nat Cell Biol, 2008), Erwin Wagner’s team generated a mouse model, from which they had removed the JunB gene in keratinocytes — cells that form the epidermis — mimicking what happens during cutaneous inflammatory disorders in humans. Now, they have observed that this mouse mutant suffers from bone loss.

The researchers found that the immune cells in the skin of this animal model generated large amounts of the cytokine IL-17 — a protein of the immune system that activates cellular inflammation in response to damage. IL-17 travels through the bloodstream to the bones. Once there, the protein acts on the osteoblasts and inhibits Wnt activity, which is a cellular signalling pathway that is involved in the formation of the skeleton and in certain disorders, such as osteoporosis, arthritis and myeloma. Treating these mice with IL-17 blockers allows the Wnt pathway to regain its normal activity and leads to bone formation.

A second mouse model, induced by overexpression of IL-17 in skin, also shows bone loss, and suggests that the deregulation of the protein is sufficient to cause this effect.

Subsequently, they analyzed a hundred human samples.  Using high resolution peripheral computed tomography (XtremeCT) — an imaging method known as virtual bone biopsy — they observed that psoriasis patients had bone loss when compared to healthy people, and this correlated with increased levels of cytokine IL-17A in blood.

TREATMENT AND IMPLICATIONS FOR OTHER DISEASES

These observations suggest that patients with psoriasis should be monitored for this loss of bone mass, or the presence of high levels of these factors in the blood.

“Treating psoriasis patients with IL-17 blockers — some already on the market — could have a beneficial effect on the loss of bone tissue, unlike other compounds that might only affect skin inflammation,” says Uluçkan. Antibodies that act on the Wnt signalling pathway are also being developed as a therapy for osteoporosis that could prove useful in these cases.

The findings of this study could also have implications for other autoimmune disorders. “IL-17 has become a focus point for the investigation of the immune system. Its deregulation is not only related to psoriasis, but also to other diseases, such as rheumatoid arthritis, inflammatory bowel disease and multiple sclerosis. Some of these have been linked to loss of bone tissue, as in the case of inflammatory bowel disease, found in 70% of cases,” explains Uluçkan. “It would be interesting to study whether IL-17 is responsible for this secondary effect.”

This work has been carried out in collaboration with the Universities of Mainz, Hamburg and Erlangen-Nuremberg in Germany, and the CNIO Bioinformatics Unit. Erwin Wagner was funded by the Spanish Ministry of Economy and Competitiveness, the BBVA Foundation, and the European Research Council (ERC), and Özge Uluçkan by EMBO, Spanish Ministry of Economy and Competitiveness, and ECTS-AMGEN. 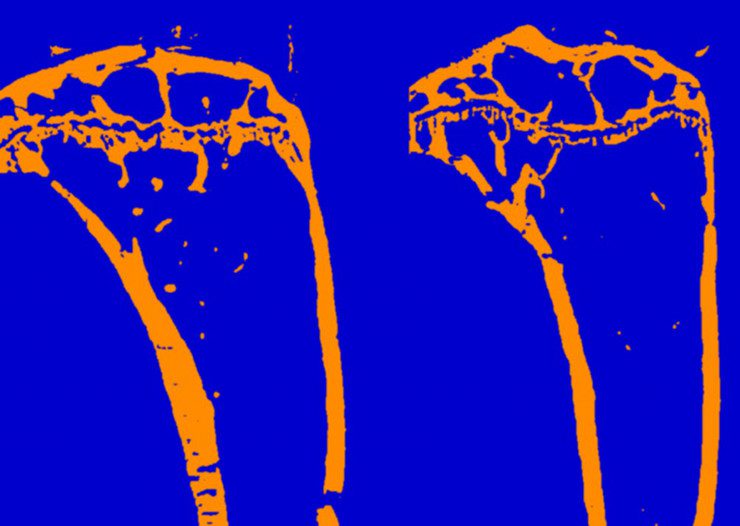 Left, histological image of healthy mouse bone. Right, bone from which the JunB gene of the epidermis has been deleted and where the loss of bone tissue can be seen. /CNIO