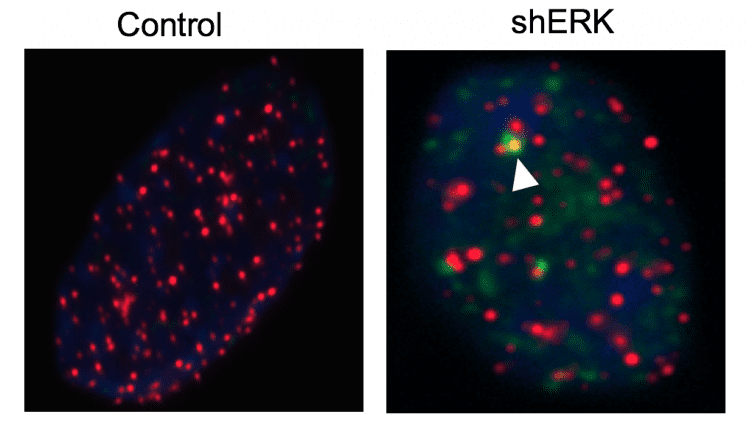 Glioblastoma is a brain tumour with very poor prognosis. Patients with glioblastoma usually develop resistance to treatments. Combination therapy could be an effective approach

The study carried out at CNIO provides unexpected and valuable information on cancer biology. It revealed that components in the RAS pathway, which is involved in numerous types of cancer, also participates in telomere maintenance

The study will be published in EMBO Molecular Medicine this week

Usually, scientists study the molecular biology of cancer to find new treatments, but sometimes, it is the other way around: when trying to find new treatments, scientists find key information on cancer biology. The researchers from the Telomeres and Telomerase Group at the Spanish National Cancer Research Centre (CNIO) have identified new drug combinations that prevent the development of therapy resistance in mice with glioblastoma, the most malignant brain tumour. They also found an unexpected link between the RAS pathway, which is involved in numerous types of cancer, and telomere maintenance. This finding, which could be used in new lines of research, will be published in the medical journal EMBO Molecular Medicine.

“We had a twofold result in our study,” says Maria A. Blasco, Head of the Telomeres and Telomerase Group at CNIO, and CNIO Director, in Madrid. “We were looking for approved drugs that could block a new target, and we found them. In the process, we also found that some molecular pathways that have a role in cancer development also participate in the regulation of telomere maintenance. This is an interesting aspect of cancer biology that was unknown before.”

For that reason, the scientists who took part in the study decided to title it “Multiple cancer pathways regulate telomere protection”.

Telomeres are protective structures at the ends of chromosomes. The Telomeres and Telomerase Group at CNIO found that attacking the telomeres in cancer cells can be an effective strategy to stop cancer growth. Specifically, the researchers in this Group found that inhibiting the TRF1 telomere protein impairs tumour progression in human and murine glioblastoma models.

Glioblastoma is the most common brain tumour, with an average survival time of about 14 months. It can be difficult to treat, because it contains cancer stem cell population that are able to regenerate a whole tumour. Two years ago, CNIO researchers found that glioblastoma cells have high levels of TRF1, a protein with increased expression in stem cells. They tried to block this protein with compounds developed at CNIO and the strategy proved effective, since it increased life expectancy in mice with glioblastoma by up to 80 per cent.

Considering that treatment of glioblastoma often fails because these tumours are highly resistant to conventional therapies, the Telomeres and Telomerase Group researchers looked for additional TRF1 inhibitors among compounds previously approved for cancer treatment or drugs being used in clinical trials. The study will be published in EMBO Molecular Medicine this week.

A new role for anticancer drugs in use

The researchers at CNIO looked for TRF1 inhibitors among the 114 anticancer drugs available for well-known cancer pathways. The screening revealed that a number of these drugs were able to block TRF1 in both glioblastoma and lung cancer cells.

Interestingly, the action mechanisms of these drugs covered molecular pathways closely linked with cancer, such as components of the RAS, and which were independent from the first inhibitors developed at CNIO (Bejarano et al., Cancer Cell, 2017).

“The fact that there are several pathways for telomere protection acting on TRF1,” explains paper co-author Jessica Louzame, “confirms the importance of telomeres for cancer cells. Identifying these pathways will allow us to find new ways of attacking telomeres and fighting cancer. Our Group is a pioneer in the study of this innovative strategy.”

After identifying the drugs that were able to block TRF1, the researchers at CNIO took a further step, testing a combination of these drugs with the first TRF1 inhibitors developed at CNIO.

The effectiveness of drug combinations was tested in mouse models of human glioblastoma to promising results. The drugs interacted with beneficial synergistic effects and helped overcome therapy resistance.

The study has been funded by the Spanish Ministry of Science, Innovation and Universities, the National Institute of Health Carlos III, the Botín Foundation and Banco Santander through Santander Universities, Worlwide Cancer Research and the International PhD Fellowship Programme “la Caixa”-Severo Ochoa, funded by “la Caixa” Foundation.