Researches from the Experimental Oncology Group at the CNIO have worked with a model of pancreas cancer in mice that is similar to the human pathology. In these tumours, they have isolated and characterised a subpopulation of cancer-associated fibroblasts (CAFs), which are associated with inflammation and which promote tumour growth. These researchers have discovered that the Saa3 gene is at least one of the genes responsible for the property that fosters tumour growth in these cells

In human tumours, the overexpression of the human version of this gene, SAA1, is associated with significant worse prognosis

The result “opens the door to the design of future therapeutic strategies”, according to researchers in Proceedings of the National Academy of Science (PNAS)

In most pancreatic cancer patients, the diagnosis is made when the disease is already advanced, and there is no effective treatment at present. There have been no significant advances to combat it in recent decades and unfortunately, its occurrence is on the increase. Now, a group of researchers from the Spanish National Cancer Research Centre (CNIO) may have found a new form of attack. “This tumour is so aggressive and so complex that it is necessary to try and attack it from various sources, not only tumour cells. Our work opens the door to the design of future therapeutic strategies. However, it is still too early to think about its clinical use,” according to researchers in their publication, in the journal Proceedings of the National Academy of Science (PNAS). One of the characteristics of pancreatic cancer is that the tumour cells are embedded in the stroma, which represents 90% of the tumour mass and which seems to form a barrier (physical and chemical) hindering treatment with inhibitors, chemotherapy and immunotherapy. Most of the studies have focused mainly on tumour cells, whilst the cells that form the stroma are the great unknown, in spite of different research groups proving that some components of stroma promote the tumour progression. Recently, various groups tried to eliminate the most abundant cells in the stroma, the so-called cancer associated fibroblasts (CAFs), but they achieved the opposite effect to that expected: the tumour continued to progress with even greater aggressiveness. The interpretation of this result was that some of the cells eliminated could have anti-tumorigenic functions. Therefore, researchers from the CNIO’s Experimental Oncology Group have focused their work on identifying a stromal cell population that fosters tumour growth, to later discover why they have this capacity and reverse it. The strategy to achieve the latter is innovative, because instead of eliminating these stromal cells which help the tumour, the objective has been their selective reprogramming. As Dr. Carmen Guerra, one of the lead researchers, and Magdolna Djurec, first author of the work, explain “there are now many groups looking into the relationship of the stroma and tumour growth, with the hope of finding new therapeutic strategies. We have seen that eliminating stromal cells may have a negative effect, so our approach is to reprogramme the stroma instead of eliminating it. It is an innovative strategy”. 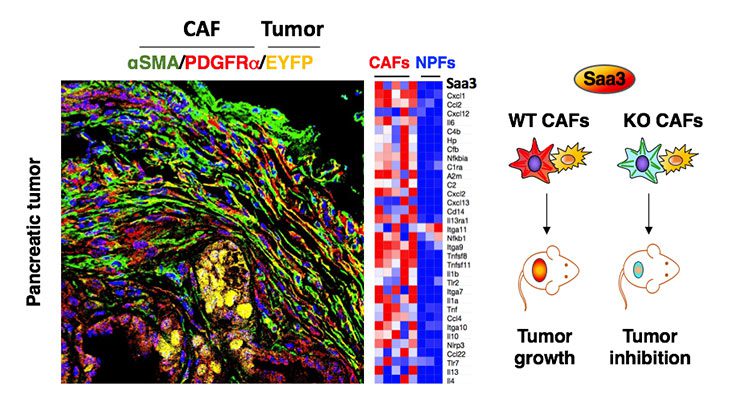 The researchers focused on a subpopulation of fibroblasts which are known to play a role in inflammation –because inflammation fosters tumour growth–. Their first task was to analyse all of the genes that are differentially expressed in the stromal fibroblasts of the tumour, the CAFs, in comparison with the fibroblasts of healthy pancreatic tissue. Their hypothesis was that the possible genes responsible for the pro-tumour role of the CAFs would be expressed at high levels only in these fibroblasts, and not in fibroblasts of the healthy tissue. The analysis revealed that the Saa3 gene is responsible for CAFs helping tumour cells to progress. When the researchers eliminated the expression of this gene in the CAFs, these cells behaved like normal fibroblasts, as they lost the ability to help the tumour cells to progress. Researchers had managed to “reprogramme” these cells, which had been stripped of their pro-tumourigenic properties. Therefore, “this finding may represent a future therapeutic strategic to combine with other strategies, such as immunotherapy, chemotherapy or inhibitors against specific signalling routes of the tumour cells”. However, “it opens the door to new research in many laboratories aimed at reprogramming the stroma instead of eliminating it”, added Djurec. It is still too early to think about its clinical application, but the work reveals a new genetic target on which to look for new possible therapeutic strategies. In human samples of pancreatic cancer, the researchers have identified the same population of ‘pro-tumour’ fibroblasts and have observed that when the SAA1 gene (the human version of Saa3) is overexpressed, the prognostic for the patients is far worse. This result is possibly the first of several, because researchers are still studying the role of other genes of potential relevance found in the comparative expression analysis of the CAFs and normal fibroblasts. This work, that started back in 2011, is technically highly complex. The Experimental Oncology Group has worked with experts in bioinformatics from the CNIO and Raul Rabadan’s group at Columbia University, in New York, as well as Andreas Trumpp’s group at the German Cancer Research Centre (DKFZ), in Heidelberg, and Bruno Sainz Jr’s group at Autónoma University of Madrid (UAM), who participates with the Experimental Oncology Group in a AECC project. The tumour samples in human patients were obtained thanks to the invaluable collaboration with the surgeon, Francisco Sánchez-Bueno from Arritxaca Hospital in Murcia, Spain. This research has been funded by the European Research Council (ERC), the Spanish Ministry of Economy, Industry and Competitiveness, the Spanish Association Againts Cancer (AECC), “la Caixa” Foundation and the AXA Research Fund.