An organism is healthy thanks to a good maintenance system: the normal functioning of organs and environmental exposure cause damage to tissues, which need to be continuously repaired. This process is not yet well understood, but it is known that stem cells in the organs play a key role, and that when repair fails, the organism ages more quickly. Researchers from the Spanish National Cancer Research Centre (CNIO) have “discovered one of the key genes that make up the maintenance mechanism for tissues” says Miguel Foronda, the first author of the manuscript.

The study is published this week in the journal Cell Reports. The authors believe that it adds another piece to the ageing, stem cells and cancer puzzle, made up of three main elements that are known to be related, but no one knows exactly how. By understanding this relationship throughout identification key regulatory genes, we could have a different, perhaps more unified, vision of these three areas with enormous implications for health.

The target of this research, the Sox4 gene, is expressed during embryonic development —it contributes, for example, to the development of the pancreas, the bones and the heart, and to the differentiation of lymphocytes. It is also active in the adult organism, but in a very limited way, being mainly restricted to some stem cell compartments.

Furthermore, when Sox4 malfunctions it becomes an oncogene. Practically all human cancers have too much Sox4, which translates into more cellular proliferation and less apoptosis—programmed cell death; a mechanism that protects against cancer. It is also known that Sox4 plays a role in metastasis.

Both of these facts—that Sox4 is expressed only in some cells in the adult organism, and that it favours cancer development when there is too much of it—indicate that Sox4 is a powerful gene, with important consequences if it is not properly regulated. The CNIO group, therefore, wanted to study more in depth the role of Sox4 in the adult organism.

It was not an easy task, because mice in which Sox4 had been eliminated die before birth. The authors’ working strategy consisted of generating a line of mice that do express Sox4, but at lower quantities than normal.

These animals survive and are fertile, but they have several peculiarities: they are smaller than normal, age earlier and do not have cancer. Conversely, they do develop other age-related illnesses.

As stated by the researchers, the mice with less Sox4: “show signs of premature loss of tissue homeostasis (maintenance), shorter telomeres, and, as a consequence, accelerated ageing and the appearance of pathologies associated with ageing, as well as cancer resistance.”

The mice deficient in Sox4 have, for example, little bone regeneration and lots of osteoporosis, indicating that this gene is important for the bone tissue maintenance mechanism.

But the authors wanted to especially investigate whether stem cells were the key actors in these consequences of lowering Sox4 levels. To this end, they created more mice in which this gene was completely deactivated in hair follicle stem cells; those responsible for the regeneration of the epidermis. In these mice, precisely, the skin repair mechanism did not work, the skin aged prematurely and they did not develop skin cancer.

The puzzle has not yet been solved: why these animals are less likely to have cancer?. One possible explanation is that a lower rate of tissue regeneration —given than the stem cells are less active in the absence of Sox4— is a cancer-inhibiting mechanism.

As Maria Blasco, the co-author, says: “this would imply that the origin of cancer is associated to regeneration errors, and if there is less regeneration there is also less cancer. The negative side is that less renewal also means more ageing. It is a complex balance, which we will only understand with more research.”

This study was funded by the Ministry of Economy and Competitiveness, the European Union, the Community of Madrid, the AXA Foundation, and the Botín Foundation. 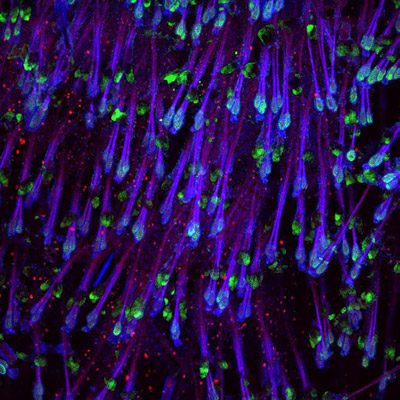 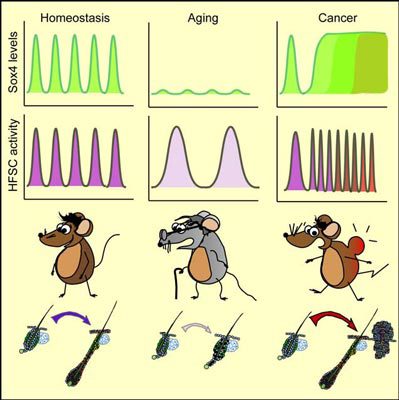