Cohesins are protein complexes that join the two copies of each chromosome—called sister chromatids—to  ensure that they are shared fairly between the daughter cells during cell division. In this way, each daughter cell receives exactly the same genetic information from the parent cell.

Pds5 is a protein associated with cohesins; it binds cohesins along different chromosome regions. In vertebrates there are two variants of Pds5, Pds5A and Pds5B, not very well characterised to date. Scientists from the Spanish National Cancer Research Centre (CNIO), led by Ana Losada, from the Chromosome Dynamics Group, have discovered—by using genetically-modified mice (knock-out mice for Pds5A and Pds5B)— that the two Pds5 variants are not equivalent, as both are necessary for cell proliferation and for embryo development to take place correctly.

The results, published today in the online version of The EMBO Journal, contribute to improving our understanding of how Pds5 proteins modulate the behaviour of cohesins, either by stabilising or destabilising the binding of cohesins to the chromosomes.

CLINICAL IMPLICATIONS OF THE STUDY

Illnesses such as Cornella de Lange Syndrome, which affects 1/30,000 newborns and which is characterised by serious physical abnormalities and cognitive impairments, have their origin in the abnormal function of cohesins. Cohesin mutations have recently been identified in some types of tumours, such as bladder cancer or acute myeloid leukaemia (AML). “If we understand the function and regulation of the cohesins, we can improve the diagnosis and treatment for affected patients”, says Losada.

“In this context, we have seen that both forms of Pds5 stabilise the binding of cohesins to the arms and distal regions of chromosomes, whilst only Pds5B does so in the centromeres— the chromosomal regions that are most critical for chromosome separation during cell division”, explains Losada.

But Pds5 proteins not only stabilise cohesins, they can also have the opposite effect when they bind to the Wapl protein. “In this case, Pds5 contributes to destabilising the binding of cohesins to chromosomes, which can sometimes be important for activating essential genes at the right moment, as well as for allowing an efficient separation of the sister chromatids during cell division”. 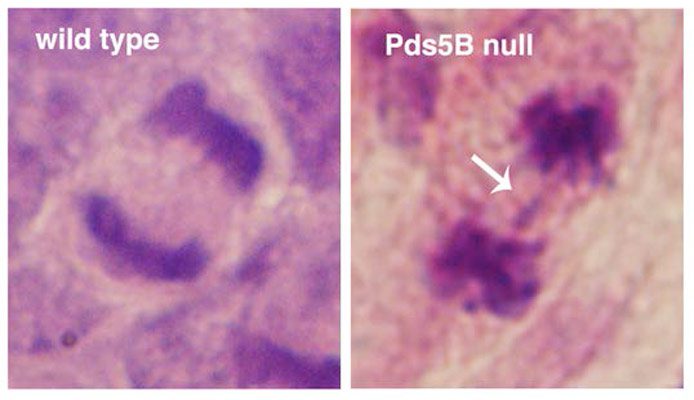