Maria A. Blasco: "For the first time, pulmonary fibrosis has been treated by rejuvenating the affected tissues"

Pulmonary fibrosis affects 8,000 people in Spain. Nowadays, there is no cure

Two months after treatment with telomerase, fibrosis had "improved or disappeared"

Idiopathic pulmonary fibrosis is a potentially lethal disease associated with the presence of critically short telomeres, currently lacking effective treatment. The Telomere and Telomerase Group at the Spanish National Cancer Research Centre (CNIO) has succeeded in curing this disease in mice using a gene therapy that lengthens the telomeres. Their work constitutes a “proof of concept that telomerase activation represents an effective treatment against pulmonary fibrosis,” the authors write in their publication in the journal eLife. Given that telomere shortening is also an indicator of organism ageing, Maria A. Blasco, lead author of the paper, points out that “this is the first time that pulmonary fibrosis has been treated as an age-related disease, looking for rejuvenating the affected tissues”.

“The most relevant aspect of our work is that it suggests a potentially viable and effective solution to a real clinical problem, pulmonary fibrosis, for which there is still no treatment,” says Paula Martínez, co-first author of the paper. “The only approved treatments for pulmonary fibrosis up-to-date have no curative effects, as they target a symptom and not the cause of fibrosis. Our therapy is based on correcting the molecular cause of pulmonary fibrosis in patients with short telomeres, introducing into the cells of damaged lung tissue the only enzyme capable of lengthening telomeres, telomerase. “

Telomeres are protein structures located at the ends of each chromosome; like caps, they protect the integrity of the chromosome when the cell divides. But telomeres only fulfill their protective function if they are long enough; when they shorten too much, the damaged cells cease to divide preventing tissue regeneration. Short telomeres are associated with ageing –as age increases, cells accumulate more divisions and more telomeric shortening– and also with several diseases. Pulmonary fibrosis, which affects around 8,000 people in Spain, is one of them.

In lung fibrosis, the lung tissue develops scars that cause a progressive loss of respiratory capacity. Environmental toxins play an important role in its origin, but it is known that there must also be telomeric damage for the disease to appear. Patients with pulmonary fibrosis have short telomeres whether the disease is hereditary –it runs into the family– or not. The most likely explanation is that when the telomeres become too short, the damaged cell activates a ‘repair program’ that induces scar formation that leads to fibrosis. 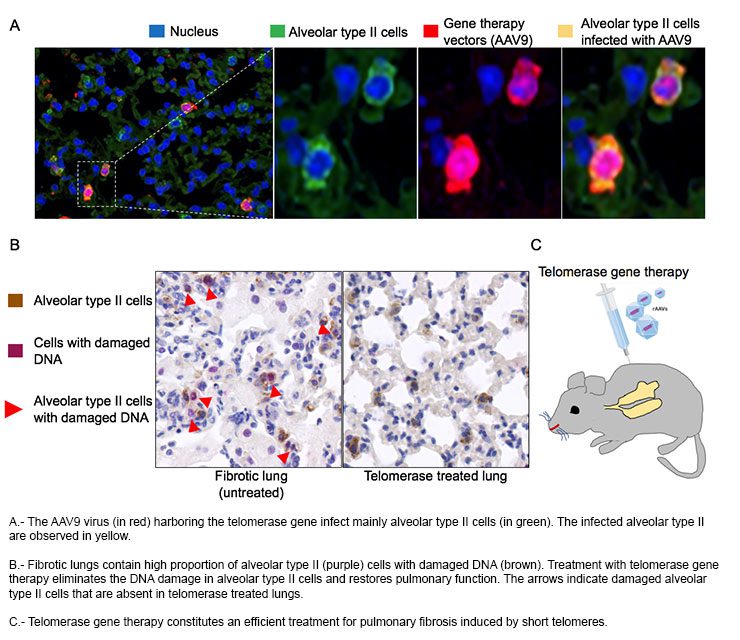 The CNIO Telomere and Telomerase Group, led by Blasco, decided to address the problem about five years ago, starting with the development of an animal model that faithfully reproduces the human disease. The most widely used model until then was to apply bleomycin into the mouse lungs to induce damage, in an attempt to reproduce the environmental insult. However, in these animals the disease goes into remission in a few weeks and there is not telomere shortening.

The CNIO researchers sought after a mouse model in which the environmental damage synergized to that produced by short telomeres, that is what happens in human pulmonary fibrosis. They succeeded in 2015, when they already indicated their next goal in their research work: “This is an essential model to test therapeutic strategies based on the activation of telomerase [the enzyme that repairs the telomeres]”, they wrote in the journal Cell Reports.

Their current publication shows that activating the telomerase enzyme to lengthen the telomeres in the lung tissue may constitute an effective therapeutic strategy to treat human pulmonary fibrosis. It has proven so in mice. Only three weeks after treatment, the sick animals “showed improved lung function and less inflammation and fibrosis” –the authors write in eLife–; two months after the treatment, the fibrosis had “improved or disappeared”.

The treatment consisted of introducing the telomerase gene into the lung cells using gene therapy. The researchers first modified a virus innocuous to humans (known as vectors) so that their genetic material incorporated the telomerase gene, and then injected those vectors into the animals. The animals received a single injection of this genetic taxi.

As Juan Manuel Povedano, co-first author of the paper, explains, “we observe that telomerase gene therapy reverses the fibrotic process in mice, which suggests that it could be effective in human patients, opening a new therapeutic opportunity towards the treatment of this disease”. Povedano is now a postdoctoral researcher at the Southwestern Medical Center at the University of Texas, USA.

The work has been carried out in collaboration with the gene therapy expert Fàtima Bosch, from the Autonomous University of Barcelona, ??with whom the first steps will also be taken to bring this therapy closer to its use in humans. “The strategy devised by the CNIO group is very encouraging,” says Bosch; “although we are still far from reaching the clinic, we are already generating gene therapy vectors for human therapy”.

The basis of this work is the hypothesis that age-associated diseases can be treated by targeting the molecular and cellular processes of ageing, specifically telomere shortening. In 2012, Blasco and her group generated mice that not only lived longer but also showed improved health by treating them with telomerase. Her work since then has aimed to develope this therapy to specifically treat age-associated diseases and telomere syndromes.

They have obtained positive results in the treatment of heart infarct, aplastic anemia and, now, pulmonary fibrosis. In the case of heart infarct, research to bring therapy to the clinic is already underway, in collaboration with the Fàtima Bosch’s group and Francisco Fernández-Avilés, Head of the Cardiology Service at the Hospital General Universitario Gregorio Marañón.

This research has been funded by the Spanish Ministry of Economy, Industry and Competitiveness (MINECO), the Botín Foundation and Banco Santander through Santander Universities and the Roche Extending the Innovation Network Program (EIN). 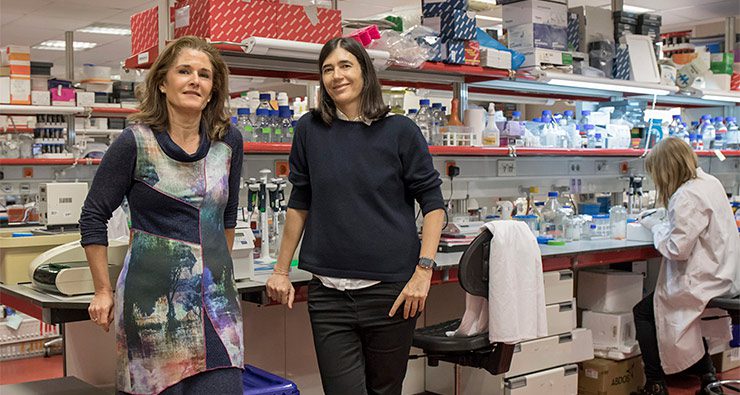