A single mutation in the mouse genome—within the K-Ras gene— reproduces the main alterations found in humans of this rare syndrome, which include short stature, facial dysmorphia, cardiac dysfunction and haematological alterations

The discovery opens avenues to novel therapeutic strategies for the disease

Noonan syndrome is a rare disease that is characterised by a set of pathologies, including heart, facial and skeletal alterations, pulmonary stenosis, short stature, and a greater incidence of haematological problems (mainly juvenile myeloid leukaemia, or childhood leukaemia). There is an estimated incidence of 1 case for every 1,000–2,500 births, and calculations show some 20,000–40,000 people suffer from the disease in Spain. From a genetic point of view, this syndrome is associated to mutations in 11 different genes —the K-Ras gene among them— that belong to the same cell signalling pathway: RAS/MAPK. Despite mutations in the K-Ras gene not being the most frequent, 2-5% of patients, they are associated with more aggressive manifestations of the disease.

A team from the Spanish National Cancer Research Centre’s (CNIO) Experimental Oncology Group has developed a mouse model that expresses the most common K-Ras mutation found in Noonan patients and reproduced its most representative features. This study has been done alongside the research groups of Xosé R. Bustelo at the Cancer

Research Centre in Salamanca; Manuel Desco at the Gregorio Marañón’s Healthcare Research Institute, and Christopher Heeschen at CNIO. Their conclusions have been published in PNAS (Proceedings of the National Academy of Sciences).

“Given the wide variety of mutations associated with this syndrome, these animal models are important tools for investigating the physical alterations associated with each one of them,” says Isabel Hernández- Porras, first author of the study. “That way these models will allow for the development of specific treatments for each mutation and for better clinical follow up of patients.”

The researchers used a commercial MEK inhibitor in a preventive treatment; the inhibitor was applied to mice with a genetic alteration in K- Ras from the embryonic stage until weaning.

“We saw that all of the developmental alterations disappeared: at the end of the treatment, the heart, facial features and size of the mouse were normal,” says Hernández-Porras. “Leukaemia, however, which usually manifests in about 10% of Noonan patients, was still present. We think there might be other pathways that influence its appearance and development”.

The study is fundamental for broadening current knowledge about the syndrome and opening up possibilities for the development of treatments. “We have seen, as with other research groups, that the seriousness or intensity of each of the alterations is related not only to the mutation the syndrome is attributed to [in this case the K-Ras gene] but also to changes in the rest of the genome,” says Hernández-Porras, who concludes that: “These mouse models will allow us to determine which modifications have a beneficial or harmful effect on this syndrome and to design potential therapeutic targets.”

Alberto J. Schuhmacher, a researcher who took part in the study, says: “In the next few years, diagnostic prenatal testing could be performed, similar to the screening test used for Down’s syndrome; sequencing the genome of the foetus by analysing cells extracted from the amniotic fluid or foetal DNA from the mother’s blood. Once these mouse models have helped us advance our knowledge of these illnesses and develop more precise drugs, we might be able to treat embryo defects without endangering the health of the mother or the foetus.”

This model also confirms that different mutations give rise to syndromes that are similar in appearance, so researchers warn of the need to stop classifying them as a function of the observed physical features, which at times leads to wrong diagnoses. “We need to classify them based on genetic sequencing, so that in the future each patient can receive the most appropriate treatment,” says Schuhmacher.

This study was funded by the Ramón Areces Foundation, the European Research Council and the National Institute of Health Carlos III (FIS). 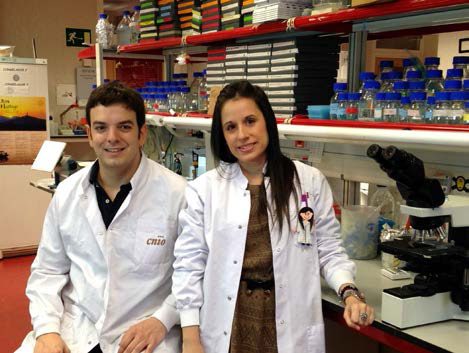