New mutations in cohesin proteins, which are closely associated with cell division, are very common in various types of cancers such as bladder cancer and melanoma

The study of cohesin mutations and their consequences could help us to better understand these pathologies, as well as improve the diagnosis and treatment of patients

Massive sequencing of cancer genomes brings to light new genes every day that could be involved in the process of tumour formation. A good example of this is cohesin, a ring-shaped protein complex that embraces DNA to control cell division. Just a few months ago, and after several studies in the same direction, the sequencing of thousands of tumour samples identified the STAG2 gene— whose product forms part of cohesin—as one of the most frequently mutated genes in several types of cancer such as bladder cancer and melanoma.

The challenge now is to understand the link between cohesin and the development and evolution of cancer, an area where there is currently little data. Ana Losada, the head of the Chromosome Dynamics Group at the Spanish National Cancer Research Centre (CNIO), an international expert in cohesin, summarises in Nature Reviews Cancer the latest research on the role of cohesin, its regulation, as well as its recently identified function as a potential driver or facilitator for tumours.

According to the article, cohesin “prevents premature separation of sister chromatids [those that contain the duplicated genetic material before cell division]”; this facilitates both the equal distribution of the genetic material between each daughter cell as well as DNA repair.

“For a few years now, several studies have added a new role for these complexes in the maintenance of the 3D structure of the genome and gene expression”, says Losada. In this case, cohesin intervenes during the interphase of the cell cycle, when the cells are not dividing, the longest stage in the cell cycle of a cell´s life.

This novel function, apart from the cell reproduction function, opens up a still-unknown field for the study of oncological diseases, which might help to understand the functional importance of cohesin mutations and their link to cancer.

The review makes a special mention of several bladder cancer studies, in which STAG2 mutations are the most frequent, representing: “up to 30% of mutations in the lower grade tumours and up to 10-15% in the most aggressive ones”.

Amongst the studies mentioned is a recent article coordinated by Francisco X. Real and Núria Malats at the CNIO . The researchers described how STAG2 mutations did not correlate with alterations in the genetic make-up of tumour cells. From their observations, the researchers concluded that: “the gene takes part in bladder cancer via different mechanisms to the distribution [of genetic material]”.

Losada points out that a better understanding of cohesin biology, as well as the generation of new animal and cell models deficient in these proteins could contribute to an improvement in the diagnosis and treatment of patients.

Since her discovery of cohesin in vertebrate organisms at the end of the 1990s, Losada has continued to focus her research into this area of knowledge using different experimental models, such as the African frog Xenopus laevis or the mouse. 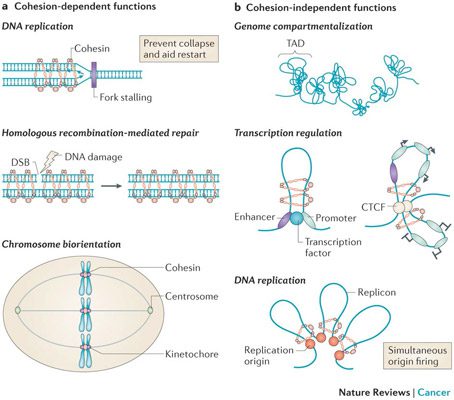