The origin of mouse telomeric RNAs is almost exclusively restricted to chromosome 18, and not to all chromosomes as was thought until now

RNA is one of the most primitive molecules associated with life that has awakened most interest over the last decade; a sister molecule to cellular DNA from which it originates via a process called transcription. Seven years ago, the groups of María Blasco at the Spanish National Cancer Research Centre (CNIO), Spain, and Joachim Lingner in Switzerland discovered that the DNA regions that contained telomeres, despite their compact and hard-to-access structure, generated RNAs that they christened TelRNAs or TERRA.

Now, a study published in the journal Nature Communications, led by María Blasco and Isabel López de Silanes, from the Spanish National Cancer Research Centre’s Telomeres and Telomerase Group, has discovered that TERRAs do not originate in all telomeres that protect the 20 murine chromosomes, but do exclusively in chromosome 18 and, to a lesser extent, in chromosome 9. This peculiarity sets the stage for future genetic manipulation in mice with the aim of researching the in vivo role of these molecules in telomere biology and in illness.

Telomeres are DNA structures that are found at the ends of chromosomes to protect them and ensure cell viability. They play a key role in ageing and in ageing-associated illnesses such as cancer, or cardiovascular disease.

To date, very little is known about the RNAs produced from telomeres. “We knew that once they are synthesised they associate with telomeres, but we didn’t know the complete sequence or where they originate from in the genome”, said Isabel López de Silanes, the lead author of the article. This lack of data has largely limited our knowledge of their functional role.

Using massive sequencing data analysis, Blasco’s team has concluded, in collaboration with Osvaldo Graña and David Pisano from the CNIO’s Bioinformatics Unit, and Orlando Domínguez from the centre’s Genomics Unit, that murine TERRAs originate from the telomeres of chromosome 18 and, to a lesser extent, from chromosome 9.

“Once TERRA were transcribed, we found that they associated with the telomeres that protect the 20 murine chromosomes [not simultaneously], and not just with their telomere of origin”, says López de Silanes. The researcher emphasises that this union “is important for the ultimate protection of chromosomes because when TERRA levels fall using molecular tools, damage is caused in the telomere”.

The discovery of the genomic origin of TERRA will allow us to design molecular and genetic tools in order to study their functional role in the normal development of the mouse, as well as their role in illnesses. “We are already generating new mouse strains that contain modifications in the regions TERRAs originate from, which will set the stage for understanding the role of these molecules and advance the frontier of knowledge regarding telomeres”, says López de Silanes.

This research has been supported by funding from the Ministry of Economy and Competitiveness, the Community of Madrid, the European Union (EuroBATS, ERC), the Lilly Foundation, the Fundación Botín, and the AXA Research Fund. 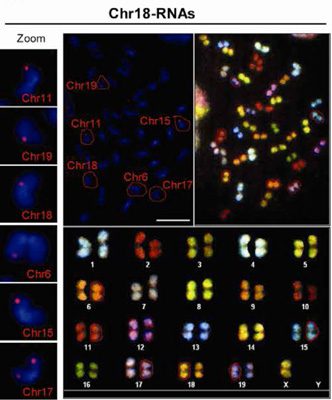