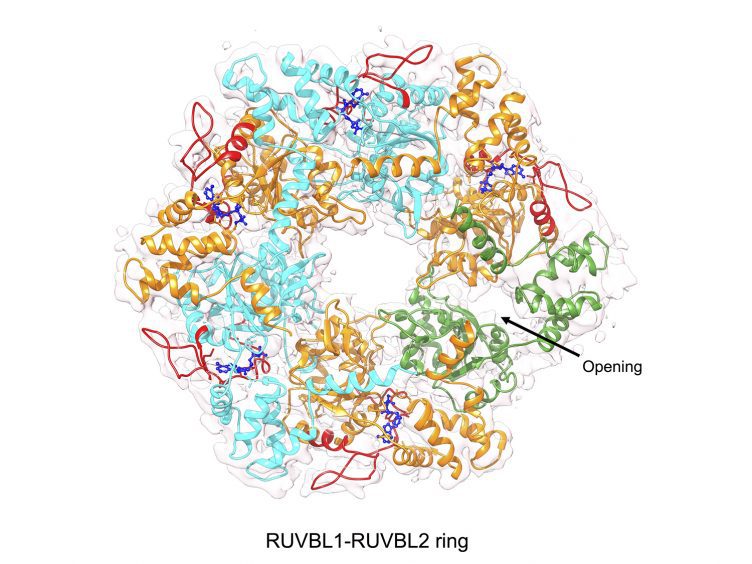 RUVBL1-RUVBL2 ring. The arrow shows the site that opens to let ADP out. /CNIO

The assembly of protein complexes involved in cancer mechanisms, like mTOR, ATR or telomerase, involves proteins – chaperones and co-chaperones – that resemble construction machinery

Researchers at CNIO used cryo-electron microscopy to solve how the ‘energy engine’ of one of these co-chaperones, a potential target to reduce tumour growth, is regulated

Proteins are sometimes described as the building blocks of life; inside cells proteins associate into large macromolecular complexes, consortiums of proteins that cooperate to perform specific functions. A large number of cancer research studies focus on finding inhibitors for some of these protein complexes. Kinases like mTOR and ATR, and enzymes like telomerase, which are overexpressed in tumours, are among such complexes. There are proteins (called chaperones and co-chaperones) whose function is to actually build these protein complexes within cells and the inhibition of this assembly process is being studied as an anti-cancer strategy. Kinases and enzymes like mTOR, ATR or telomerase can be compared to a building under construction, and chaperones (like HSP90) and co-chaperones (like R2TP) would be construction machines. Current evidence suggests the therapeutic potential of targeting RUVBL1-RUVBL2, the energy engine in the co-chaperone R2TP, in the treatment of cancer. This has led researchers from the Macromolecular Complexes in DNA Damage Response Group at the Spanish National Cancer Research Centre (CNIO) to use the powerful tool of cryo-electron microscopy to determine the mechanism regulating RUVBL1 and RUVBL2. The study has been published in Science Advances.

As previously reported, the Macromolecular Complexes in DNA Damage Response Group had used cryo-electron microscopy to determine the high-resolution structure of R2TP. In the study, researchers at CNIO observed how R2TP is designed to place the chaperone HSP90 in contact with the proteins it would act on. The R2TP complex has an energy engine, a ring formed by ATPases RUVBL1 and RUVBL2, which uses the energy released from the hydrolysis of ATP into ADP. In this energy production mechanism, ATPases capture ATP in the cell and continuously release ADP as waste and energy. Scientists found that in the ring formed by RUVBL1 and RUVBL2, access to the ATP binding site was completely blocked, holding ATP or ADP inside and thus preventing the exchange of energy and the motor from working. The question is, how can the energy required to assemble protein complexes be used?

The answer was found by observing the R2TP system under the cryo-electron microscope: “We identified a region in RUVBL2 that acts as a gate that controls the access of ATP and ADP to the protein; a requirement to use the energy provided by ATP,” explains Óscar Llorca, Head of the Macromolecular Complexes in DNA Damage Response Group at CNIO. “The key that regulates the opening of this gate is the interaction between the ATPase RUVBL2 and a component of R2TP required for mTOR assembly.”

Studying the structure and dynamics of proteins, that is, understanding the interactions between proteins that are necessary for biological functions, has always been very challenging, in terms of both experimental observations and computational approaches. However, the use of cryo-electron microscopy in the study of proteins and macromolecular complexes, one of the priorities of the Structural Biology Programme at CNIO, is revolutionising the way we observe and understand how proteins work, as mentioned in Nature a few months back.

A full understanding of the processes determining how macromolecular complexes are built can help to find novel cancer treatment strategies based on inhibiting protein assembly. Several studies have shown that the inhibition of the RUVBL1-RUVBL2 ATPases has therapeutic potential in the treatment of cancer. The recent study conducted by the team led by Llorca at CNIO, in collaboration with the group of Laurence H. Pearl at the University of Sussex (UK), and published in Science Advances will help accelerate progress in this field.

“We know that the energy from ATP is used by RUVBL1 and RUVBL2 ATPases in the assembly of mTOR and other macromolecular complexes. But we do not know how the energy is used and what it is used for,” says Llorca. “In this study, we found that RUVBL2 has a gate that regulates the access of ATP to the catalytic site where the energy is released. We also observed that the opening of the gate is regulated by molecules that are needed in the assembly of mTOR, thus coupling the motor activation to the moment when the energy is required. However, we do not know what this energy is used for exactly at the molecular level, which needs further studies.”

The study has been funded by the Ministry of Science, Innovation and Universities, the National Institute of Health Carlos III, the European Regional Development Fund and Wellcome Trust.