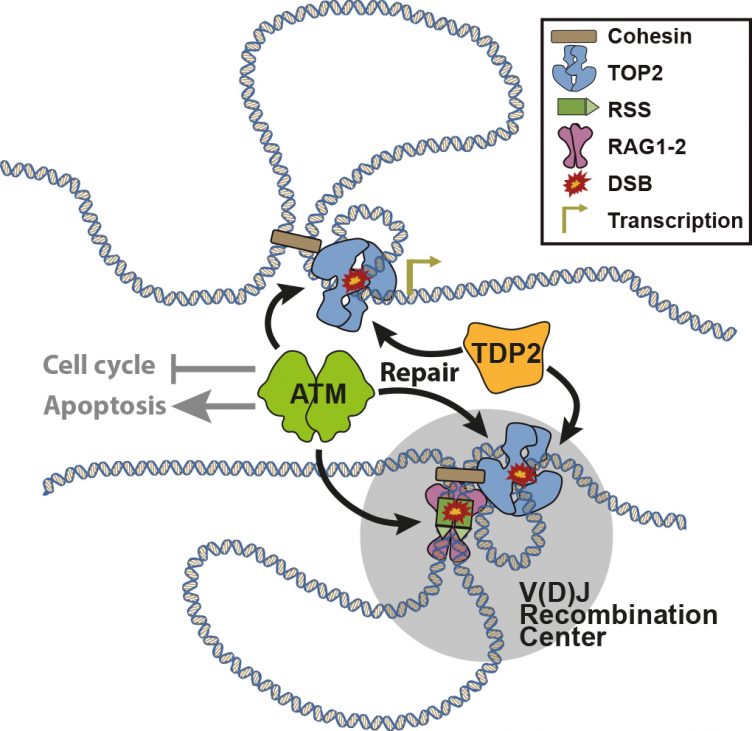 Movements and changes in 3D genome structure form knots and tangles in the DNA. Their resolution is a source of chromosomal breakage that may cause lymphoid cancers, as revealed by a study published in ‘Nature Communications’

This study opens new ways to understand underlying causes of lymphoma. The researchers are now interested in finding whether their results can be applied to other types of cancer

Researchers from the Spanish National Cancer Research Centre (CNIO), Madrid, and the Andalusian Molecular Biology and Regenerative Medicine Centre (Cabimer), Seville, published today a paper in Nature Communications that shows that DNA topological problems may cause endogenous DNA breaks that have a causal relationship with cancer.

The starting point of the study, entitled ‘Endogenous topoisomerase II-mediated DNA breaks drive thymic cancer predisposition linked to ATM deficiency’, is that, during lymphocyte maturation, a number of genomic regions must find each other and rearrange to generate the DNA sequence variability required for the immune response. ‘This study demonstrates that movements and changes in the 3D genome structure create knots and tangles in DNA that, during their resolution, are a source of chromosomal breakage,’ says Felipe Cortés Ledesma, lead author and Head of the Topology and DNA Breaks Group at CNIO. ‘In conditions in which the response to these breaks is impaired, chromosomal translocations that may be associated with lymphoma development can occur. Actually, this is true upon mutations in the ATM gene, which are very common in haematological malignancies and the cause of the lymphoma-prone syndrome ataxia telangiectasia,’ he adds.

Ataxia telangiectasia (A-T), also referred to as Louis-Barr syndrome, is a genetic disease caused by ATM gene mutation and inherited in an autosomal recessive pattern. The gene is located on the long arm of chromosome 11. The Spanish Ataxia Telangiectasia Association (AEFAT) funded part of this study, published today and co-authored by Felipe Cortés Ledesma, Alejandro Álvarez-Quilón and José Terrón Bautista, from Cabimer.

As described in the abstract of the paper, the ATM kinase is a master regulator of the DNA damage response to double-strand breaks and a well-established tumour suppressor whose loss is the cause of the neurodegenerative and cancer-prone syndrome A-T. A-T patients are particularly predisposed to develop lymphoid cancers. ‘Our results show a strong causal relationship between topological problems and cancer development (…), confirming these lesions as a major driver of ATM-deficient lymphoid malignancies, and potentially other conditions and cancer types,’ the authors say in the paper.

The research paper published in Nature Communications opens new ways to understand the causes of cancer. One of them, according to Cortés Ledesma, is the possibility of ‘getting a deeper understanding of the molecular mechanisms involved in the appearance and repair of this type of DNA break,’ as well as testing whether there is a relationship between these findings and other cancer types. Along this line, the research team points to the possibility of carrying out clinical studies in A-T patients.

The study was carried out by scientists from two of the most prestigious biomedical research centres in Spain.

As to Cabimer, it is a pioneering multidisciplinary biomedical research centre in Spain, engaged in a combination of basic and applied research to enhance people’s health and wellbeing. It reports to the Spanish National Research Council (CSIC), the Government of Andalusia, the University of Seville (US) and Pablo de Olavide University (UPO) (https://www.cabimer.es/web3/en/home/).

Finally, AEFAT is a non-for-profit organisation established in 2009 and named an association of public interest in 2014. It is made of families and friends of patients with A-T from all over Spain. AEFAT forms part of the Spanish Federation of Rare Diseases (FEDER) and the Spanish Federation of Ataxias (FEDAES). It regularly raises money for research into A-T (https://www.aefat.es).