Scientists from the Spanish National Cancer Research Centre (CNIO) and the Spanish National Cardiovascular Research Centre (CNIC) have been able to reproduce, for the first time in human cells, chromosomal translocations associated with two types of cancer: acute myeloid leukaemia and Ewing’s sarcoma. The discovery, published today in the journal Nature Communications, opens the door to the development of new therapeutic targets to fight these types of cancer.

The study was carried out by Sandra Rodriguez-Perales – from CNIO’s Molecular Cytogenetics Group, led by Juan Cruz Cigudosa– and Juan Carlos Ramírez and Raúl Torres, from CNIC’s Viral Vector Technical Unit. The researchers have shown that it is possible to produce chromosome modifications in human cells that are genetically identical to those observed in leukaemia and other types of human cancer.

This new technology offers two main advantages based on the use of molecular tools to manipulate the genome: firstly, working models that had not existed up until now for the study of tumour biology and, secondly, their application will eventually allow for the study of new therapeutic targets and therapies.

The alterations leading to tumour development are due to multiple changes in cell physiology and specifically in the cell genome. In leukaemia and other tumours called sarcomas, exchanges of large DNA fragments occur between different chromosomes, a phenomenon known as chromosomal translocations. As the study’s authors point out, these translocations are necessary both for the generation and the progression of a number of neoplastic processes.

“The study of this type of tumours has been problematic up to now due to the lack of cell models and the appropriate animal models”, says CNIC researcher Juan Carlos Ramírez, who adds that the difficulty of generating these chromosomal translocations had limited the availability of cells with this mark of the disease.

Using RNA-Guided Endonuclease (RGEN) technology or CRISPR/Cas9 genome engineering technology, CNIO and CNIC researchers have shown that it is possible to obtain such chromosomal translocations. In this way, they have managed to reproduce chromosomal translocations in human stem cells from blood and mesenchymal tissue that are identical to those observed in patients with acute myeloid leukemia (a blood and bone marrow cancer) or Ewing’s sarcoma (a type of bone tumour that affects children and teenagers).

“With this breakthrough it is possible to generate cell models with the same alterations as observed in tumour cells from patients, which will allow us to study their role in tumour development”, says CNIO researcher Sandra Rodríguez-Perales. “In this way, it will be possible to experimentally recapitulate the necessary subsequent steps for normal cells to transform into cancer cells”.

The researchers have used the powerful RGEN tool, which was developed at the beginning of 2013, for gene manipulation in eukaryotic cells, including human ones. It is based on the design of a small RNA (RNAsg) that is complementary and specific to a 20 nucleotide DNA region. The binding of the RNAsg to the DNA acts as a signal for the Cas9 enzyme to produce a cut on the edge of the marked DNA. The system is very specific and efficient and allows for cuts to be made in the DNA’s double helix wherever the researchers need to do so.

Rodríguez-Perales, Torres and Ramírez have shown that by transferring the RGEN components into primary human cells, regions of the exchanged chromosomes in some tumours can be marked, thus generating cuts in those chromosomes.

“When the DNA repair machinery tries to repair those cuts, it drives the generation of a translocation between two different chromosomes, in many cases reciprocally between the two chromosomes implicated”, says CNIC researcher Raúl Torres.

The study’s authors conclude by stating that the use of this technology will also allow for the clarification of how and why chromosomal translocation occurs, which without doubt will allow new anti-cancer therapeutic strategies to be tackled. 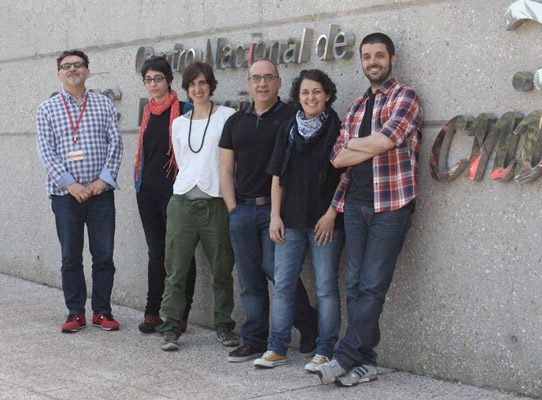