They propose blocking the energy of tumours to enhance the anti2 tumour effect of taxanes, such as taxol, or other antimitotic agents

The new breakthrough could improve the effectiveness of taxol, one of the most powerful anti2cancer agents used in clinical treatments; however, there are still tumours on which its effects are negligible or extremely limited

Cancel cells become addicted to glucose, which they use as their regular source of energy to grow and develop. Although this was observed over nine decades ago by the German physiologist, Otto Warburg; there is still not therapeutic strategy today that can effectively take advantage of this special energy requirement. The initial approach appears to be simple: the lack of glucose could specifically induce the death of cancer cells.

A new study by the Cell Division and Cancer Group of the Spanish National Cancer Research Centre (CNIO), headed Marcos Malumbres, has now proven that blocking glycolysis — the molecular mechanism that makes it possible to extract energy from glucose — is especially damaging to the division of cancer cells and that specifically acting on this energy-based peculiarity could be effective in treating cancer in combination with chemotherapeutic agents such as taxol.

The research project, published in the prestigious journal, Nature Cell Biology, brought together, in addition to a number of CNIO collaborators, the teams headed by Patricia Boya and Eduardo Rial from the Centre for Biological Research (CSIC) in Madrid; Raúl Méndez from the IRB Barcelona; Guillermo Velasco, from the Complutense Univeristy of Madrid; Miguel López, from the University of Santiago de Compostela; and Asish Saha, from Boston University.

One of the typical aspects of cancer cells is their capacity to divide in an uncontrolled and almost unlimited manner. “There are many therapeutic agents today, such as taxol, that precisely prevent the division of cancer cells by interrupting the mitosis (an especially delicate part of the cell division process in which the genetic material is passed from the mother cell to the daughter cells),” says María Salazar Roa, CNIO researcher and co-director of the study.

One of the issues the researchers are raising is how cancer cells obtain the energy they need to maintain their high rate of division. Using molecular biology and biochemistry techniques, the authors describe, in line with Warburg’s theory, how the AMPK and PFKFB3 proteins become significantly active during mitosis, leading cell metabolism towards glycolysis.

“These proteins detect damage to the mitochondria (the cell’s energy sources) in response to cell division and make the energy depend mainly on glucose,” clarifies Elena Doménech, whose signature appears first on the paper that she has been preparing as her doctoral thesis.

GREATER ADDICTION TO GLUCOSE IN THE PRESENCE OF TAXOL

The researchers also analysed the glucose requirements of cancer cells treated with taxol and, therefore, when mitosis is interrupted. “We can see that antimitotic treatments, such as taxol, increase the need cancer cells have for glucose even more than when there is no treatment,” says Salazar.

Based on the fact that cancer cells need more glucose when they are being treated with taxol, the inhibition of glycolysis should enhance the anti-cancer effect of antimitotic drugs. In a way, it would be like forcing them to need more glucose and, at the same time, preventing its use. Then, the cancer cells would die of starvation as they would be unable to obtain the energy they need to cover their vital functions.

The authors used cellular models taken from breast cancer and mice, finding that, indeed, mitotic drugs, such as taxol, are more efficient when the cells’ ability to metabolize glucose is eliminated using PFKFB3 inhibitors.

“The therapeutic value of inhibiting PFKFB3 has often been discussed; however, no appropriate cell-based scenario had been proposed for its clinical use. Our results suggest that PFKFB3 inhibitors can be extremely efficient in combination with antimitotic drugs,” explains Malumbres.

Taxol, a compound derived from the bark of the yew tree, is one of the greatest revolutionary elements in the history of chemotherapy over the last 25 years. Today, other taxanes, such as paclitaxel and docetaxel, are part of the standard treatment provided in the case of certain cancers, such as lung, breast and ovarian cancer. Other antimitotic drugs are the alkaloids derived from Vinca (Catharanthus roseus), such as vinblastine, vincristine and vinorelbine, widely used to treat leukaemia, lymphoma and melanoma. The future direction, according to the team from CNIO, will be to identify groups of patients with these and other tumours in which to enhance the effects of antimitotic agents by blocking the tumour’s energy source.

María Salazar Roa was granted a post-doctoral contract by the Scientific Foundation of the Spanish Association against Cancer (AECC) to undertake these studies aimed at seeking new therapies against cancer. The work of the CNIO has also been funded by the Ministry of Economy and Competition, the Community of Madrid, the international foundation Worldwide Cancer Research and the European Union. 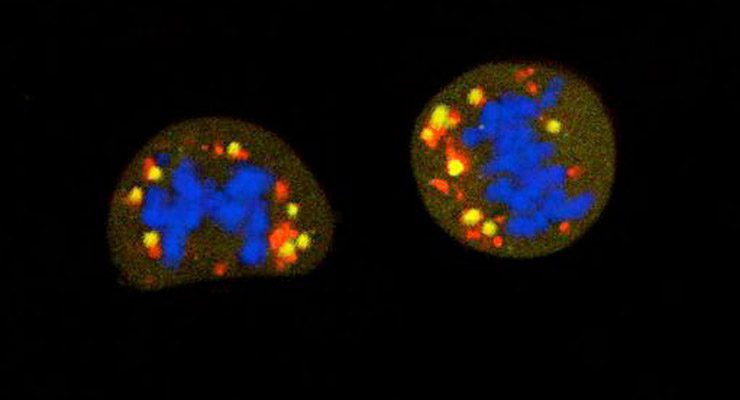 Cells dividing. Genetic material is shown in blue and mitochondria in red. During this process, the mitochondria are damaged (yellow signs) making the cells particularly dependent on glucose as a source of energy. /CNIO