Cell. An article in ‘Cell’ reveals a new resistance mechanism to chemotherapy in breast and ovarian cancer

The study warns of the need to incorporate new diagnostic markers in these patients, which would allow for the screening of more effective treatments

It is estimated that between 5% and 10% of breast and ovarian cancers are familial in origin, which is to say that these tumours are attributable to inherited mutations from the parents in genes such as BRCA1 or BRCA2. In patients with these mutations, PARP inhibitors, which are currently in clinical trials, have shown encouraging results that make them a new option for personalised cancer treatment, an alternative to standard chemotherapy. Nevertheless, the latest studies indicate that a fraction of these patients generate resistance to the drug and, therefore, stop responding to the new treatment.

The team led by Spanish National Cancer Research Centre researcher Óscar Fernández-Capetillo, head of the Genomic Instability Group, together with researchers from the National Cancer Institute in the US, have participated in a study that describes the causes that explain why tumours with BRCA1 and BRCA2 mutations stop responding to PARP inhibitor drugs.

“PARP inhibitors are only toxic in tumours that have an impaired DNA repair mechanism, such as those that contain BRCA1/2 mutations” says María Nieto-Soler, a researcher from Fernández?Capetillo’s team.

According to the researchers, the problem arises when these tumours, in addition to having BRCA1 and/or BRCA2 mutations, also contain secondary mutations in other proteins such as 53BP1 or PTIP, whose function is to restrain DNA repair. In these cases, the mutations mutually compensate for each other, the tumour cells recover the ability to repair their DNA and the drug stops working.

Fernández-Capetillo says: “This is one of the first studies to demonstrate that secondary mutations can make tumours resistant when faced with specific treatments like, in this case, PARP inhibitors”.

When the researchers compared different treatments, they observed that for those tumours with BRCA1 and/or BRCA2 mutations that also presented mutations in 53BP1 or PTIP, standard treatment with cisplatin was more efficient than personalised therapy.

“These data indicate that only patients containing mutations in BRCA1 and/or BRCA2, but not in the secondary genes we have described, would be candidates for an effective personalised therapy with PARP inhibitors”, explains Fernández-Capetillo, concluding that: “Our results suggest that 53BP1 and PTIP genes would need to be evaluated in patients with familial breast and ovarian cancer when deficiencies in the BRCA genes were present before deciding on their treatment”.

In this context, researchers intend to warn healthcare providers in personalised medicine that the challenge, in addition to the search for markers of drug sensitivity for new pharmacological compounds, also encompasses the search for secondary resistance markers. The aim would be to bring about significant improvements in treatment outcomes. 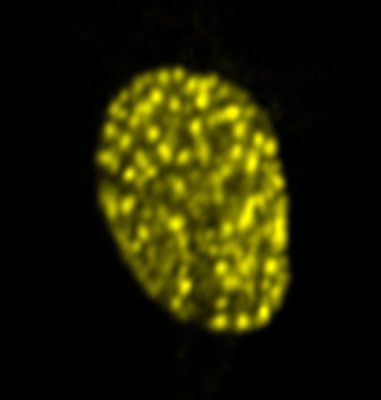 Tumour cell with focal accumulation of 53BP1 protein in areas of DNA damage (yellow dots). In some patients, mutation in 53BP1 favours the repair of genetic material and the appearance of resistance to new treatments. /CNIO